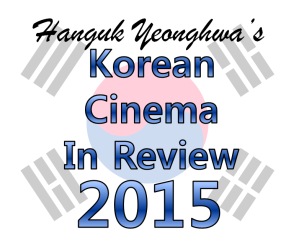 As 2015 draws to a close, it’s the perfect time to review the highs and lows the Korean film industry experienced over the past 12 months.

As the final figures roll in it’s clear that, commercially speaking, 2015 has been a stellar year with much to celebrate. In early December the Korean Film Council announced admissions had hit over 200 million whilst stating total sales of over KRW 1.58 trillion (USD 1.34 billion); two films achieved over 10 million admissions, while six now feature in the top 50 highest grossing Korean film of all time (source: KoBiz). Furthermore, the year still isn’t over as the figures for Himalaya, The Tiger, and The Joseon Magician still haven’t been finalised and look set to add more gains to already impressive figures.

However in terms of quality output 2015 was an especially weak year for Korean cinema. In Hanguk Yeonghwa’s review of 2014 I stated the year had been a lackluster one for K-film and, as much as it pains me to say it, 2015 was worse.

In fact, the first six months of 2015 were so woeful for the industry that media outlets were forced to acknowledge that, “only 40.7 percent, or 35.46 million cinemagoers saw a Korean film this year, a record low since statistics began in 2004.” (source: Chosun Ilbo, June 19). Many spectators blamed the low attendance on the dominance of big Hollywood films including Avengers: Age of Ultron and Jurassic World, yet critics were also keen to point out that while production values in K-films were significantly improving, Korean output was generally becoming increasingly generic and made for profit which turned local audiences towards international fare.

The year began with the continued dominance of historical epic Ode to My Father, which ultimately went on to become the second highest grossing film in K-cinema history. While critics were upset with the film’s continued presence in multiplexes, there also weren’t any strong new releases to topple it as despite a slew of high profile titles appearing in cinemas from January to June – including Gangnam Blues, C’est Si Bon, Detective K 2, Empire of Lust, Twenty, The Treacherous, The Silenced and many more – they were met largely with audience indifference.

During this period however, K-cinema saw international success as four titles – Coin Locker Girl, The Shameless, Madonna and Office – were selected to represent Korea at the Cannes International Film Festival in May. While their selection is cause to celebrate, these films too were met with a muted response by critics and audiences alike when released across the peninsula, although Coin Locker Girl notably exceeded expectations.

Thankfully, the doom and gloom was lifted in summer. The release of uber-patriotic Northern Limit Line in June was a big success hauling $38.9 million, while a month later ever-reliable director Choi Dong-hoon’s blockbuster Assassination scored over $84 million to become the filmmaker’s biggest ever opening, and currently sits comfortably in seventh place on the list of highest grossing Koreans films of all time. Expectations of the spy-thriller’s longevity turned out to be somewhat exaggerated however as a week later Tom Cruise vehicle Mission Impossible 5 went straight to the top spot, but early August saw the release of Ryoo Seung-wan’s Veteran which became a huge hit with audiences and, thanks to positive word of mouth, surpassed predictions to scoop up the lion’s share of audience revenue to become the biggest film of the year and the third biggest film in K-cinema history securing $89.8 million.

Such positivity was continued in November as The Priests and Inside Men defied predictions and became sleeper hits with $36.2 million and $46.8 million, respectively, and helped to propel actor Lee Byung-hun back into some positive limelight.

December saw The Himalayas and The Tiger appear in cinemas a day before Star Wars: The Force Awakens. The face-off was widely publicised as a victory for the Korean Wave as, “The Himalayas grossed $8.7 million from Thursday to Sunday, topping The Force Awakens‘ $7.9 million performance over the same period” (source: The Hollywood Reporter). While such articles generally failed to take into account the difference in screen share between the films involved, the Korean film industry took the final figures as a triumphant way to end the year.

Ultimately, 2015 was a highly lucrative year for the industry with cinema attendance hitting yet another record high and Korean films attaining around 52% of the market share (source: Chosun Ilbo).

Now that the year is over, here are Hanguk Yeonghwa’s top ten Korean films of 2015.

For Korean cinema, 2019 was a year that saw the continuation of trends that have been readily apparent for the past several years - an increasing number of big blockbuster/commercially-orientated films with high production values, and the decreasing quality of creative, engaging, and memorable stories. That is not to say the talent has disappeared of... END_OF_DOCUMENT_TOKEN_TO_BE_REPLACED
2018 was quite a bizarre year for Korean cinema. The year began much like any other. The first few months of the year were typically dedicated to family-friendly fare. News of Korean films that were... END_OF_DOCUMENT_TOKEN_TO_BE_REPLACED
While the films released throughout any particular year are indicative of a country's identity, for Korean cinema in 2017 the exploration of political and social issues were especially revealing of the cultural shift that has... END_OF_DOCUMENT_TOKEN_TO_BE_REPLACED

Acclaimed actress Jeon Do-yeon is to be honoured at the 21st Bucheon International Fantastic Film Festival (BiFan) this year, in celebration of her 20 year career that began with Contact back in 1997. Entitled 'Contact, Jeon Do-yeon,' the special program is dedicated to the revered actress and will feature highlights from her incredible filmography, including Secret Sunshine... END_OF_DOCUMENT_TOKEN_TO_BE_REPLACED
Director Kim Jong-Kwan is well-known to fans of independent Korean cinema. A graduate of the Seoul Institute of the Arts, his short film How to Operate a Polaroid... END_OF_DOCUMENT_TOKEN_TO_BE_REPLACED
We are just one week away from the start of the 2nd Korea International Expat Film Festival (KIXFF).  Festival director Kevin Lambert took some time from his busy schedule to answer questions about the festival which... END_OF_DOCUMENT_TOKEN_TO_BE_REPLACED

Having a film selected to premiere at the Cannes Film Festival is an incredible achievement - having two is quite extraordinary. Yet that is precisely what director Hong Sang-soo has done, as The Day After (그 후) and Claire's Camera (클레어의 카메라) are due to be screened, with both films starring actress Kim Min-hee. Selected for the 'In Competition'... END_OF_DOCUMENT_TOKEN_TO_BE_REPLACED
The Villainess (악녀) has received an explosive trailer in the run-up to its debut at the Cannes Film Festival on May 21st. Appearing in the 'Out of Competition - Midnight Projections' program, writer/director Jung Byung-gil's latest... END_OF_DOCUMENT_TOKEN_TO_BE_REPLACED
Director Bong Joon-ho's Okja (옥자) is almost upon us. The highly anticipated science-fiction/drama is set to premiere In Competition at the Cannes Int. Film Festival on May 19th, before appearing on Korean cinema screens around June... END_OF_DOCUMENT_TOKEN_TO_BE_REPLACED
Loading Comments...
Comment
×