The reversal of gender roles can prove to be a simultaneously comedic as well as enlightening viewing experience. For every humorous moment of mistaken identity, cross dressing and so forth, the gender inequalities within society are expressed and critiqued. From Kramer vs. Kramer to Devil Wears Prada, from Mrs. Doubtfire to Disney’s Tangled, each production highlights the ‘active’ and passive’ roles which men and women employ in articulating their (cultural) identities, identities which are comically subverted to reveal their fragile and ultimately hollow nature.

You’re My Pet (너는 펫), the latest adaptation from the manga series, also uses gender differences for comical effect, attracting controversy in the process as a men’s association filed a legal petition due to what they claim was an emasculating portrayal of men. Ironically this attracted an even greater audience, although it’s quite undeserved as You’re My Pet is unfortunately little more than a vacuous rom-com vehicle for stars Jang Geun-seok and Kim Ha-neul.

As a successful 30-something career woman, Ji Eun-i (Kim Ha-neul (김하늘) has a very comfortable life with her high-ranking job at a fashion magazine and spending time with close friends. Kang In-ho (Jang Geun-seok (장근석), on the other hand, is homeless and penniless despite his past fame as a ballet dancer. Their paths intertwine however when In-ho begs to live at his friend’s apartment – a friend who happens to live with his older sister Eun-i, who is less than pleased with the new arrangement. Eun-i’s displeasure grows further when her brother is forced to leave, meaning she and stranger In-ho must live together alone. The two strike a deal – Eun-i is the master while In-ho will take the role of a pet, who will be fed and taken care of in exchange for performing errands. As the two spend more time together they become closer, yet complicating matters is the arrival of Eun-i’s first love, Cha Woo-seong (Yoo Tae-joon (류태준).

Eun-i is a successful and indepdendent 30-something woman

Kim Byeong-gon (김병곤) competently – although blandly – directs the film. Often You’re My Pet lacks the technical dynamics and polish of a feature film, instead displaying conventions more akin to televisual productions. While such faults are the responsibility of the director, he cannot be held accountable for the uninspiring and dull script that squandered the potential that appeared so promisingly in the synopsis. For example, the reversal of gendered roles should provide insight and amusement, but is largely the opposite. Eun-i is a successful woman, yet the film rarely focuses on her achievements preferring to highlight her unhappiness as a singleton and the constant frustrations she must endure in the workplace from her colleagues. Additionally, Eun-i is never conveyed as the ‘master’ in her relationship with In-ho, and is in fact more a maternal figure as she cooks him meals, washes his hair, and punishes him for naughty behaviour. The (forced) appearance of her first love Woo-seong does nothing to promote her independent status as she then ultimately becomes the prize in a love triangle.

Despite his poverty stricken status, In-ho’s representation fairs so much better that at time it becomes cringeworthy. Women continually comment about his handsome features and his prowess as a professional dancer. Ironically this is the only tangible result of the reversal of gender roles, as actor Jang Geun-seok is routinely discussed in terms of image, and as such You’re My Pet is reduced to a fairly average vehicle for the star’s promotion.

The relationship between Eun-i and In-ho, absurd origin notwithstanding, is occasionally quite endearing as the two struggle to live with each other and adhere to the rules of the arrangement. As such the relationship develops in an organic and natural fashion akin to newlyweds, yet due to the ‘master and pet’ dichotomy in which Eun-i ultimately becomes a maternal figure,  the ‘love’ feels somewhat implausible and forced in order for a romantic finale. 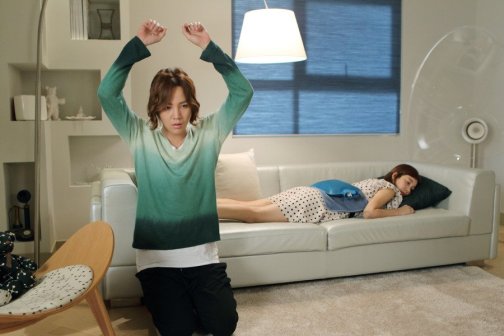 With regards to acting, both leads are rather average and have few scenes in which to display their craft. Kim Ha-neul gives the best performance by far, although she never fully conveys the decisive and no-nonsense sensibilities that a woman dedicated to her career would inhabit. Due to this she is routinely chastised by her subordinates (a feature seriously lacking in realism particularly in Korean culture) and allows In-ho’s immature behaviour with little protest. As for Jang Geun-seok, he conveys the ‘man-child’ characteristics of In-ho well yet lacks the charisma to make In-ho endearing, relying on his physical features to perform that function. In-ho is often irritating due to this as scenes in which he strives for attention, such as throwing tantrums and having his hair washed, are conveyed as the petty contrivances of a child rather than a charming-but-poor man attempting to woe his love interest. 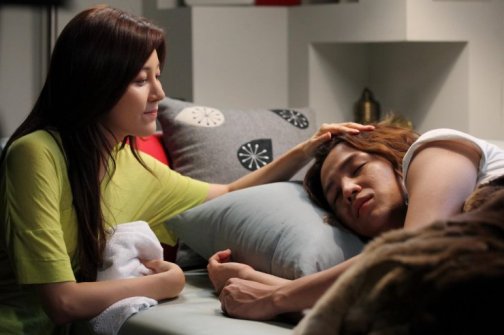 You’re My Pet is unfortunately a rather shallow romantic-comedy, which fails at both being romantic or comedic. The premise is a fine one, although the potential is never fully realised as the archaic constructions of gender identity overwhelm it, as does Jang Geun-seok who uses the film as little more than a self-promoting device. Kim Ha-neul does add charm to You’re My Pet with her performance, but it is not enough to elevate the film above its mediocre status.

For Korean cinema, 2019 was a year that saw the continuation of trends that have been readily apparent for the past several years - an increasing number of big blockbuster/commercially-orientated films with high production values, and the decreasing quality of creative, engaging, and memorable stories. That is not to say the talent has disappeared of... END_OF_DOCUMENT_TOKEN_TO_BE_REPLACED
2018 was quite a bizarre year for Korean cinema. The year began much like any other. The first few months of the year were typically dedicated to family-friendly fare. News of Korean films that were... END_OF_DOCUMENT_TOKEN_TO_BE_REPLACED
While the films released throughout any particular year are indicative of a country's identity, for Korean cinema in 2017 the exploration of political and social issues were especially revealing of the cultural shift that has... END_OF_DOCUMENT_TOKEN_TO_BE_REPLACED

Acclaimed actress Jeon Do-yeon is to be honoured at the 21st Bucheon International Fantastic Film Festival (BiFan) this year, in celebration of her 20 year career that began with Contact back in 1997. Entitled 'Contact, Jeon Do-yeon,' the special program is dedicated to the revered actress and will feature highlights from her incredible filmography, including Secret Sunshine... END_OF_DOCUMENT_TOKEN_TO_BE_REPLACED
Director Kim Jong-Kwan is well-known to fans of independent Korean cinema. A graduate of the Seoul Institute of the Arts, his short film How to Operate a Polaroid... END_OF_DOCUMENT_TOKEN_TO_BE_REPLACED
We are just one week away from the start of the 2nd Korea International Expat Film Festival (KIXFF).  Festival director Kevin Lambert took some time from his busy schedule to answer questions about the festival which... END_OF_DOCUMENT_TOKEN_TO_BE_REPLACED

Having a film selected to premiere at the Cannes Film Festival is an incredible achievement - having two is quite extraordinary. Yet that is precisely what director Hong Sang-soo has done, as The Day After (그 후) and Claire's Camera (클레어의 카메라) are due to be screened, with both films starring actress Kim Min-hee. Selected for the 'In Competition'... END_OF_DOCUMENT_TOKEN_TO_BE_REPLACED
The Villainess (악녀) has received an explosive trailer in the run-up to its debut at the Cannes Film Festival on May 21st. Appearing in the 'Out of Competition - Midnight Projections' program, writer/director Jung Byung-gil's latest... END_OF_DOCUMENT_TOKEN_TO_BE_REPLACED
Director Bong Joon-ho's Okja (옥자) is almost upon us. The highly anticipated science-fiction/drama is set to premiere In Competition at the Cannes Int. Film Festival on May 19th, before appearing on Korean cinema screens around June... END_OF_DOCUMENT_TOKEN_TO_BE_REPLACED
Join 143 other subscribers