With his non-invasive, realism-infused vision, director Lee Yoon-ki’s (이윤기) films are wonderfully character driven as he explores the fragility and complexity of modern relationships. My Dear Enemy (멋진 하루) is very much set within such a framework, as the director subtly peels away the psychological and emotional layers of two ex-lovers who join forces for a day. With his palpable sensitivity and rejection of cliches, director Lee has crafted a poignant examination of the difficulties of early thirty-somethings in contemporary Korea, and their hopes and desires in forming lasting relationships. While the impetus wanes during the final third of the film, My Dear Enemy is an incredibly charming film bolstered by tender and captivating performances by Jeon Do-yeon and Ha Jeong-woo.

Searching high and low in a betting office, Kim Hee-soo (김희수, Jeon Do-yeon (전도연) has almost given up hope of finding ex-boyfriend Jo Byeong-woon (조병운, Ha Jeong-woo (하정우). She doesn’t wish to reconcile, however; Hee-soo wants the large sum of money she lent Byeong-woo a year ago and is determined to retrieve it. Finally locating her happy-go-lucky ex, Byeong-woo claims he doesn’t have the money but, with some effort, he can repay her by the end of the day. Afraid he will disappear as before, Hee-soo chaperones Byeong-woo as he collects the money during the course of the day, and as time passes they begin to understand each other more deeply than they thought possible.

Right from the start, director Lee employs his trademark opening long take to absorb the audience into the narrative, following resolute Hee-soo as she traverses a squalid gambling den in search of Byeong-woon. The technique is highly effective in constructing realism as well as provoking curiosity, so that when conflict finally occurs it feels both natural and rewarding. The initial confrontation highlights how wonderfully characterized Hee-soo and Byeong-woon are, with her determination, cynicism and anal retentiveness in stark contrast to his easygoing, considerate, and positive attitude. The differences between them give rise to the question as to why they became a couple in the first place, yet once this minor detail is overlooked what follows are incredibly compelling interactions as the former lovers converse and quarrel, coming to understand each other more clearly than ever before. As Byeong-woon is penniless himself, both he and Hee-soo travel together as he attempts to borrow funds from friends and acquaintances, placing them in a variety of situations that force the duo to re-examine their ideologies and lives. Director Lee uses each opportunity to not only interrogate his protagonists but also contemporary Korean society, and how it has shaped an entire generation now in their thirties. Given the crux of the reunion is debt, financial issues abound in conjunction with marital pressures and gender roles, each explored from an alternative perspective as additional characters are introduced. The subtle sophistication of each encounter is a real delight.

Yet My Dear Enemy is also notable for the captivating performances of A-listers Jeon Do-yeon and Ha Jeong-woo. Director Lee’s distinctive sensitivity and compassion calls for a particular style and quality of acting, and the two gifted stars fulfill their roles with the utmost sincerity. Jeon Do-yeon is wonderfully cynical and stubborn as Hee-soo, exhibiting a frosty and distancing demeanor that initially makes her unlikeable. However through Byeong-woon’s positivity and kindness, as well as a re-examining  of priorities due to their shared experiences, the subtle changes that Hee-soo undergoes are deftly exuded by Jeon as she slowly softens into a more considerate person. 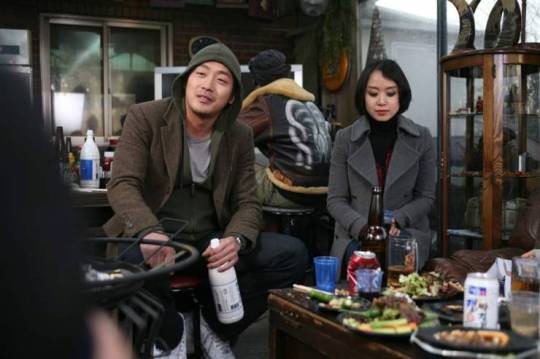 Hee-soo spends time with Byeong-woon’s family, learning more about his past

Of the two, Ha Jeong-woo arguably has the more challenging role in portraying the down-on-his-luck yet affable Byeong-woon. His kindness and generosity convey a palpable positivity, yet it is his natural charisma that makes the character so lovable and draws people closer. The actor superbly sidesteps any potential ‘playboy’ implications by emphasising naivety as a trait which is often scorned by Hee-soo, indicating that while the former lovers are quite different their attributes actually help to make each other stronger.

While the performances and the evolving relationship are a joy to watch, the film begins to falter in the final third. Director Lee seems unsure of how to lead the protagonists through to some form of finale, and a series of missteps detract from the journey they’re on. Just as Hee-soo and Byeong-woon begin to learn from and understand one another, their development is suddenly cut short and while such scenes are occasionally romantic, they could have easily been condensed without interrupting the revelations they discover. Yet luckily the film manages to right itself during the final moments, allowing the couple to convey their fundamental changes while also not taking the easy way out. As such, My Dear Enemy a highly poignant and uplifting film, and in-keeping with the compassionate sensitivity for which director Lee is renowned.

Over the course of the day, Hee-soo’s priotrities begin to change

My Dear Enemy (멋진 하루) is a charming and moving slice of realism from director Lee Yoon-ki (이윤기), whose trademark sensitivity and compassion are fully on display. Bolstered by wonderful performances from Jeon Do-yeon and Ha Jeong-woo, the film is a sophisticated yet subtle exploration of the thirty-something generation and their relationships, as well as an interrogation of the role of Korean culture in such matters. As such, the drama is mature and sincere throughout, displaying some the best Korean filmmaking talent at their most sensitive.

For Korean cinema, 2019 was a year that saw the continuation of trends that have been readily apparent for the past several years - an increasing number of big blockbuster/commercially-orientated films with high production values, and the decreasing quality of creative, engaging, and memorable stories. That is not to say the talent has disappeared of... END_OF_DOCUMENT_TOKEN_TO_BE_REPLACED
2018 was quite a bizarre year for Korean cinema. The year began much like any other. The first few months of the year were typically dedicated to family-friendly fare. News of Korean films that were... END_OF_DOCUMENT_TOKEN_TO_BE_REPLACED
While the films released throughout any particular year are indicative of a country's identity, for Korean cinema in 2017 the exploration of political and social issues were especially revealing of the cultural shift that has... END_OF_DOCUMENT_TOKEN_TO_BE_REPLACED

Acclaimed actress Jeon Do-yeon is to be honoured at the 21st Bucheon International Fantastic Film Festival (BiFan) this year, in celebration of her 20 year career that began with Contact back in 1997. Entitled 'Contact, Jeon Do-yeon,' the special program is dedicated to the revered actress and will feature highlights from her incredible filmography, including Secret Sunshine... END_OF_DOCUMENT_TOKEN_TO_BE_REPLACED
Director Kim Jong-Kwan is well-known to fans of independent Korean cinema. A graduate of the Seoul Institute of the Arts, his short film How to Operate a Polaroid... END_OF_DOCUMENT_TOKEN_TO_BE_REPLACED
We are just one week away from the start of the 2nd Korea International Expat Film Festival (KIXFF).  Festival director Kevin Lambert took some time from his busy schedule to answer questions about the festival which... END_OF_DOCUMENT_TOKEN_TO_BE_REPLACED

Having a film selected to premiere at the Cannes Film Festival is an incredible achievement - having two is quite extraordinary. Yet that is precisely what director Hong Sang-soo has done, as The Day After (그 후) and Claire's Camera (클레어의 카메라) are due to be screened, with both films starring actress Kim Min-hee. Selected for the 'In Competition'... END_OF_DOCUMENT_TOKEN_TO_BE_REPLACED
The Villainess (악녀) has received an explosive trailer in the run-up to its debut at the Cannes Film Festival on May 21st. Appearing in the 'Out of Competition - Midnight Projections' program, writer/director Jung Byung-gil's latest... END_OF_DOCUMENT_TOKEN_TO_BE_REPLACED
Director Bong Joon-ho's Okja (옥자) is almost upon us. The highly anticipated science-fiction/drama is set to premiere In Competition at the Cannes Int. Film Festival on May 19th, before appearing on Korean cinema screens around June... END_OF_DOCUMENT_TOKEN_TO_BE_REPLACED
Join 143 other followers