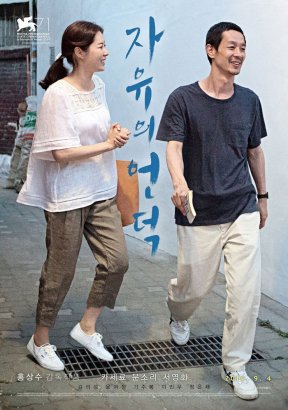 When sickly language teacher Kwon (Seo Young-hwa (서영화) returns from a trip to the mountains to cure her ailments, she is surprised to discover a hand-written letter by Japanese ex-boyfriend Mori (Ryo Kase) waiting for her. Settling in the local coffee shop, Kwon begins to read the passionate account of how Mori has travelled to Korea in order to find and be with her, and his encounters with pretty barista Yeong-seon (Moon So-ri (문소리) as well as his friendly guest house owners (Yoon Yeo-jeong (윤여정) and (Kim Ee-seong (김의성).

Hill of Freedom (자유의 언덕) is director Hong Sang-soo’s (홍상수) 16th feature and as with much of his recent output the film has proved a hit on the festival circuit, screening at Venice, Toronto, Vancouver, Busan, and London, respectively. The film is also a notable return to a male-orientated narrative following a highly successful run of female-centered films (Nobody’s Daughter Haewon, Our Sunhi).

Fans of director Hong will find much to enjoy in Hill of Freedom, as his trademark sense of humour, focus on naturalised locations and mise-en-scene, as well as his often whimsical and charming filmmaking techniques, are all present and correct. The manner in which the narrative unfolds is one of the film’s highlights as Kwon, having received Mori’s letter, drops the pages in a stairwell and in her haste to collect them puts them back together in the incorrect order as well as – crucially – leaving a page behind. When Kwon later reads the letter and Mori’s story transpires, the events are presented in a non-linear manner, as with the pages themselves. The concept is quite endearing, particularly with Mori’s quest to find and declare his affections to Kwon presented through an emotional gamut of highs and lows rather than a progressive state, adding an interesting and unpredictable spin to the story as well as to the genre as a whole.

Yet Hill of Freedom is not without issues. Director Hong has made awkward encounters amongst his protagonists part of his modus operandi as an auteur, and the results are often alluring character moments that reveal a great deal about the psychological status at hand. In Hill of Freedom however such confrontations are often either cringeworthy viewing experiences or unintentionally comedic – and occasionally, both at the same time. Chiefly this is due to the dialogue which is mostly in the English language, and despite the wealth of acting talent on display it is a feature that no-one seems to be particularly comfortable with, except veteran actress Yoon Yeo-jeong who provides the best performance within the film as the kind guest house owner. While the awkward use of English may very well be an attempt to convey the naturally clumsy chance meetings between people through language, it is often quite over-exaggerated to the point where tension and development are diffused.

English is also a problem simply as dialogue. It is impressive that director Hong can write a script in a different language, yet the discussions that occur are delightfully naive, particularly during the scenes in which Mori discusses politics, is drunk and/or attempting to philosophically discuss time as a concept. As such the conversations that develop and evolve lack the sincerity of director Hong’s earlier films, and as a result Hill of Freedom is an enjoyable yet flawed addition to his filmography.

Mori encounters a variety of people while waiting for Kwon, often with awkwardly funny results

Hill of Freedom is return to male-centered narratives for writer/director Hong Sang-soo, which follows Mori on a quest to find ex-girlfriend Kwon and declare his love. All the staple features of director Hong’s films are apparent throughout the film and there is much to be enjoyed through the charming narrative style and camera techniques. However, chiefly due to the mostly English script, the dialogue is often naive while the delivery is uncomfortable for most of the actors involved. Hill of Freedom is an enjoyable yet flawed addition to director Hong’s body of work.

For Korean cinema, 2019 was a year that saw the continuation of trends that have been readily apparent for the past several years - an increasing number of big blockbuster/commercially-orientated films with high production values, and the decreasing quality of creative, engaging, and memorable stories. That is not to say the talent has disappeared of... END_OF_DOCUMENT_TOKEN_TO_BE_REPLACED
2018 was quite a bizarre year for Korean cinema. The year began much like any other. The first few months of the year were typically dedicated to family-friendly fare. News of Korean films that were... END_OF_DOCUMENT_TOKEN_TO_BE_REPLACED
While the films released throughout any particular year are indicative of a country's identity, for Korean cinema in 2017 the exploration of political and social issues were especially revealing of the cultural shift that has... END_OF_DOCUMENT_TOKEN_TO_BE_REPLACED

Acclaimed actress Jeon Do-yeon is to be honoured at the 21st Bucheon International Fantastic Film Festival (BiFan) this year, in celebration of her 20 year career that began with Contact back in 1997. Entitled 'Contact, Jeon Do-yeon,' the special program is dedicated to the revered actress and will feature highlights from her incredible filmography, including Secret Sunshine... END_OF_DOCUMENT_TOKEN_TO_BE_REPLACED
Director Kim Jong-Kwan is well-known to fans of independent Korean cinema. A graduate of the Seoul Institute of the Arts, his short film How to Operate a Polaroid... END_OF_DOCUMENT_TOKEN_TO_BE_REPLACED
We are just one week away from the start of the 2nd Korea International Expat Film Festival (KIXFF).  Festival director Kevin Lambert took some time from his busy schedule to answer questions about the festival which... END_OF_DOCUMENT_TOKEN_TO_BE_REPLACED

Having a film selected to premiere at the Cannes Film Festival is an incredible achievement - having two is quite extraordinary. Yet that is precisely what director Hong Sang-soo has done, as The Day After (그 후) and Claire's Camera (클레어의 카메라) are due to be screened, with both films starring actress Kim Min-hee. Selected for the 'In Competition'... END_OF_DOCUMENT_TOKEN_TO_BE_REPLACED
The Villainess (악녀) has received an explosive trailer in the run-up to its debut at the Cannes Film Festival on May 21st. Appearing in the 'Out of Competition - Midnight Projections' program, writer/director Jung Byung-gil's latest... END_OF_DOCUMENT_TOKEN_TO_BE_REPLACED
Director Bong Joon-ho's Okja (옥자) is almost upon us. The highly anticipated science-fiction/drama is set to premiere In Competition at the Cannes Int. Film Festival on May 19th, before appearing on Korean cinema screens around June... END_OF_DOCUMENT_TOKEN_TO_BE_REPLACED