When teenager So-young belatedly discovers she is pregnant, her attempt to get an abortion is dismissed by a doctor as too dangerous. Overhearing their conversation however is middle-aged Seung-yeon who, after several years of trying and failing to become pregnant, offers So-young a deal – the baby for an expensive foreign car. As the two women head into the country for the final months of So-young’s pregnancy, they form a close relationship, supporting each other through the unusual circumstances. Yet they are beset by problems from Seung-yeon’s selfish husband, and a group of three hunters with a penchant for rape. All the while, a secretive gardener watches the events unfold.

As the title implies, Godsend (신의 선물) is intended as something of a contemporary nativity story, expressed through the unique visions of Kim Ki-duk – here on writing and producing duties – and protege director Moon Si-hyun (문시현). Kim Ki-duk’s methodology of employing amoral, misogynistic characters to explore social problems is quite apparent throughout the film, yet Godsend is also lighter than most projects he is involved with, presumably due to director Moon. Indeed, the portrayal and character development ascribed to unlikely duo So-young and Seung-yeon is quite charming, arguably even empowering, in the early stages of the film as the twosome attempt to complete their unorthodox deal without the aid of men. Bonding scenes, which include driving lessons and growing vegetables, are sweet natured and sincere. That is, before the inclusion of men. The male characters within Godsend are appalling beasts, and the threat of rape is constantly present throughout the film which often makes for uncomfortable viewing.

Seung-yeon is constantly abused by her selfish husband

While early sex scenes between Seung-yeon and her husband convey an impersonal and unloving relationship very well, the theme of ‘sex as duty’ and his later consistent attempts to rape his own wife despite her proclamations to stop emphasise the intense misogyny laced within the story. This is further compounded by the three hillbilly hunters who lay sexual siege to the women, while So-young’s ex simply wants to receive a share of the money. In each predicament Seung-yeon and So-young are routinely blamed and ‘punished’ for stepping outside of traditional patriarchal ‘boundaries’, often to shocking – and infuriating – effect. While Kim Ki-duk certainly has his flaws, his depictions of misogyny are usually quite insightful on both character-driven and cultural levels. Such depth is not contained within Godsend, and as such the later attempts to change such morally vacuous males into upstanding gentlemen rings ridiculously hollow.

Yet Godsend is very engaging whenever the story returns to the developing sisterhood between Seung-yeon and So-young. Critics often lament Kim Ki-duk’s characters for taking huge and arguably illogical leaps within his narratives, and director Moon Si-hyun overcomes such concerns through non-linear editing.  Initially the film jumps from So-young’s disgust at the proposed exchange to her journey with Seung-yeon into the countryside, yet director Moon fills in the gaps with flashbacks which works wonderfully in terms of character development, with their burgeoning relationship easily the heart and soul of the film.

As a modern nativity however, Godsend falls flat. While the first half of the film sets up events well, the second half provides an overabundance of sexist sub-plots that detract from the journey the women undertake. The constant misogyny and threat of rape constructs a perverse nativity as opposed to an exploration of contemporary pregnancy and childbirth issues. Thankfully the religious themes are not overt however, while the developing relationship between So-young and Seung-yeon makes Godsend an interesting and oft-compelling drama. 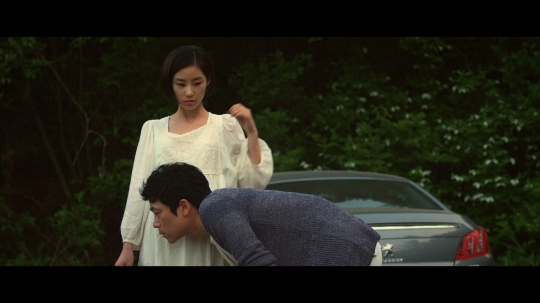 Godsend is a compelling attempt at a contemporary nativity story of sorts, based on a screenplay by Kim Ki-duk and directed by one of his proteges, Moon Si-hyun. Exploring the issues of pregnancy and surrogacy, the film shines when depicting the burgeoning relationship between the two central female protagonists as they bond during their unorthodox deal. However the inclusion of atrocious male characters, who perpetuate a constant threat of rape, often makes for uncomfortable viewing.

For Korean cinema, 2019 was a year that saw the continuation of trends that have been readily apparent for the past several years - an increasing number of big blockbuster/commercially-orientated films with high production values, and the decreasing quality of creative, engaging, and memorable stories. That is not to say the talent has disappeared of... END_OF_DOCUMENT_TOKEN_TO_BE_REPLACED
2018 was quite a bizarre year for Korean cinema. The year began much like any other. The first few months of the year were typically dedicated to family-friendly fare. News of Korean films that were... END_OF_DOCUMENT_TOKEN_TO_BE_REPLACED
While the films released throughout any particular year are indicative of a country's identity, for Korean cinema in 2017 the exploration of political and social issues were especially revealing of the cultural shift that has... END_OF_DOCUMENT_TOKEN_TO_BE_REPLACED

Acclaimed actress Jeon Do-yeon is to be honoured at the 21st Bucheon International Fantastic Film Festival (BiFan) this year, in celebration of her 20 year career that began with Contact back in 1997. Entitled 'Contact, Jeon Do-yeon,' the special program is dedicated to the revered actress and will feature highlights from her incredible filmography, including Secret Sunshine... END_OF_DOCUMENT_TOKEN_TO_BE_REPLACED
Director Kim Jong-Kwan is well-known to fans of independent Korean cinema. A graduate of the Seoul Institute of the Arts, his short film How to Operate a Polaroid... END_OF_DOCUMENT_TOKEN_TO_BE_REPLACED
We are just one week away from the start of the 2nd Korea International Expat Film Festival (KIXFF).  Festival director Kevin Lambert took some time from his busy schedule to answer questions about the festival which... END_OF_DOCUMENT_TOKEN_TO_BE_REPLACED

Having a film selected to premiere at the Cannes Film Festival is an incredible achievement - having two is quite extraordinary. Yet that is precisely what director Hong Sang-soo has done, as The Day After (그 후) and Claire's Camera (클레어의 카메라) are due to be screened, with both films starring actress Kim Min-hee. Selected for the 'In Competition'... END_OF_DOCUMENT_TOKEN_TO_BE_REPLACED
The Villainess (악녀) has received an explosive trailer in the run-up to its debut at the Cannes Film Festival on May 21st. Appearing in the 'Out of Competition - Midnight Projections' program, writer/director Jung Byung-gil's latest... END_OF_DOCUMENT_TOKEN_TO_BE_REPLACED
Director Bong Joon-ho's Okja (옥자) is almost upon us. The highly anticipated science-fiction/drama is set to premiere In Competition at the Cannes Int. Film Festival on May 19th, before appearing on Korean cinema screens around June... END_OF_DOCUMENT_TOKEN_TO_BE_REPLACED
Join 143 other subscribers