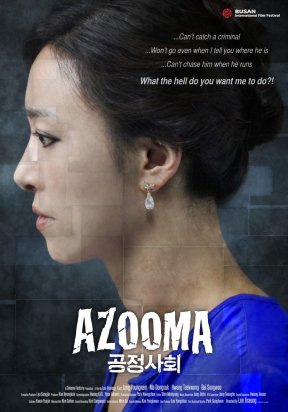 The revenge thriller is often synonymous with Korean cinema, thanks largely to the successes of director Park Chan-wook and his contemporaries. Yet with the exception of Lady Vengeance, this realm of darkness and violence is very much dominated by men. Despite their stake in the evils perpetuated on the characters, women are marginalized into supporting roles while righteous torture and murder are masculine concerns.

Azooma (공정사회) changes that by having the central female protagonist directly involved in the action, in conjunction with tapping into socio-cultural concerns of child rape and a corrupt and overly-lenient legal system. Due to such content it’s perhaps unsurprising that Azooma – a variation on the spelling of ‘ajumma’, meaning middle-aged woman – is an independent production, giving director Lee Ji-seung (이지승) the freedom to pursue such cathartic female-lead violence. However this freedom is also the films undoing particularly in regard to the editing, which detracts from an otherwise thrilling revenge tale.

A single mother (Jang Young-nam (장영남) is late picking up her daughter Yeon-joo (Lee Jae-hee (이재희) from school, and as the 10 year old walks home alone she is abducted and raped by a man (Hwang Tae-gwang (황태광). Luckily finding Yeon-joo after the incident, the ajumma immediately takes her daughter to hospital for surgery and contacts her estranged husband (Bae Seong-woo, 배성우) for help. Yet he is more concerned with his own reputation, while the detective in charge of the case (Ma Dong-seok (마동석) seemingly couldn’t care less about apprehending the criminal. Devastated by the impotency of law enforcement, the ajumma decides to take the law into her own hands and find the paedophile herself. 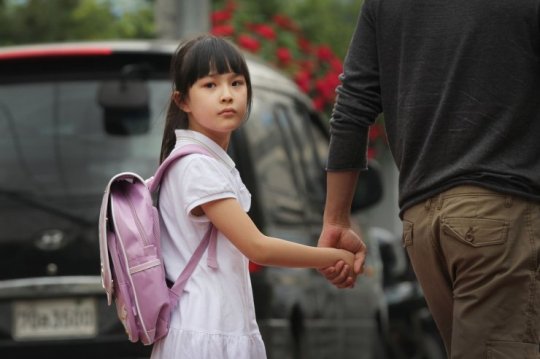 Yeon-joo is abducted by a stranger after school

The original Korean title ‘공정사회’ means ‘fair society’, and the irony is certainly not lost in translation. One of the great strengths of Azooma is the manner in which patriarchy as a whole is conveyed as responsible for what happens to Yeon-joo. Director Lee portrays an array of misogynistic issues that combine to place both mother and daughter as victims within contemporary society, and not just from a crime. Indeed, the reason the ajumma is late to meet Yeon-joo after school is due to a business meeting with a creepy older man, featuring some potent close-ups of her pulling down her skirt and covering herself to avert his gaze. Yet by far the most villainous character in the film is Yeon-joo’s father, who encapsulates the hypocrisy and selfishness of contemporary masculinity acutely well. He is of the ideology that sex is something ‘shameful’ for a female, and his fury that Yeon-joo is taken to a hospital where he knows people is as shockingly offensive as it is sickeningly real. Merely concerned for his own reputation rather than his daughter’s well being, the father brilliantly articulates the survival of traditional misogyny in modern society and serves to build frustration and pressure – for both the ajumma and the audience – incredibly well.

While it may come as a shock to some, Azooma is actually based on a true story. Director Lee does a great job in targeting the overly lenient law system for sex offenders as lacking any credibility, and ultimately forcing the ajumma to locate the criminal alone. Building on issues raised by prior films such as Silenced (also based on a true story) and Poetry, Azooma deftly conveys that even if Detective Ma were concerned with apprehending the paedophile, the criminal would most probably receive a light sentence – perhaps even as little as six months. The scenes in which the paedophile covers any trace of his DNA are simultaneously frightening and repulsive, as it is quite clear that this is not the first time he has committed such an act, and with the indifferent attitude of the police force it will not be the last. The unbelievable obstructions of justice caused by men prompt the ajumma to search for the criminal herself using clues provided by her daughter, and amazingly she finds him. It is here however that the true story ends as the ajumma confronts her daughter’s attacker, leading to suspense-filled sequences. 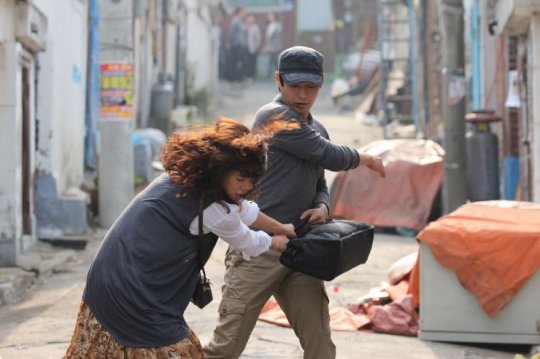 Due to ineffective police work, the ajumma tracks the criminal herself

While director Lee builds tension well and continually provides acute criticism of contemporary Korean masculinity and their institutions, he is also given too much free reign in the post-production department. The editing within Azooma is the downfall of the film, as there is simply far too much non-linear editing over the course of the film. There are so many jumps to different times and events that often the suspense and desire for revenge, which took time and effort to generate, dissipates. This is a genuine shame as had the editing been a little more linear, the film would be arguably much more poignant and powerful.

Despite such criticisms the film manages to right itself in a quite thrilling final act in which the ajumma, completely dejected by the maltreatment she and Yeon-joo have suffered, seeks retribution. Simultaneously difficult yet enthralling to watch, the scenes of torture last long in the memory as the ajumma dishes out her own unique brand of justice. It is a testament to the issues within the film that such violence is not only desirable, but actually feels too short; even with the torture, it still seems as if the criminal didn’t suffer enough. It is wonderfully impressive to finally see a Korean woman at the helm of such violence. Even in Lady Vengeance, Geum-ja exists to provide vengeance for other grieving parents. With Azooma, the audience can witness a woman directly affected by a crime take control of the situation and emerge reborn. While all the loose ends are tied up a little too neatly, the violence is highly cathartic while the narrative itself contains numerous areas of debate, and as such Azooma is an impressive revenge thriller. 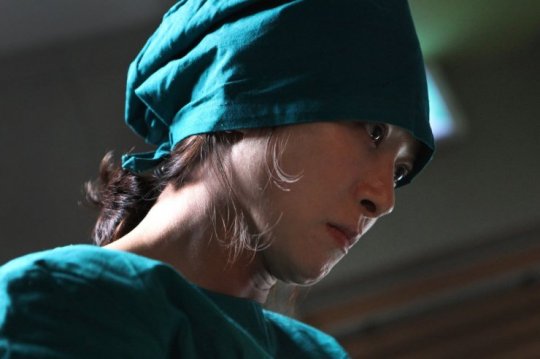 Disillusioned with patriarchal institutions, the ajumma prepares for her own brand of justice

Azooma is a potent revenge thriller concerned with a mother who seeks retribution after her daughter is raped. Director Lee Ji-seung wonderfully conveys the temperament of the ajumma as she is pushed to breaking point by patriarchal society, and it is enthralling to see a Korean woman at the helm of such violence as it is such a rarity. While the non-linear editing is overly used to the point of dissipating the tension, the narrative is consistently compelling as misogyny is explored, corruption and leniency in law enforcement is exposed, and a female protagonist enacts arguably justifiable vigilante torture.

For Korean cinema, 2019 was a year that saw the continuation of trends that have been readily apparent for the past several years - an increasing number of big blockbuster/commercially-orientated films with high production values, and the decreasing quality of creative, engaging, and memorable stories. That is not to say the talent has disappeared of... END_OF_DOCUMENT_TOKEN_TO_BE_REPLACED
2018 was quite a bizarre year for Korean cinema. The year began much like any other. The first few months of the year were typically dedicated to family-friendly fare. News of Korean films that were... END_OF_DOCUMENT_TOKEN_TO_BE_REPLACED
While the films released throughout any particular year are indicative of a country's identity, for Korean cinema in 2017 the exploration of political and social issues were especially revealing of the cultural shift that has... END_OF_DOCUMENT_TOKEN_TO_BE_REPLACED

Acclaimed actress Jeon Do-yeon is to be honoured at the 21st Bucheon International Fantastic Film Festival (BiFan) this year, in celebration of her 20 year career that began with Contact back in 1997. Entitled 'Contact, Jeon Do-yeon,' the special program is dedicated to the revered actress and will feature highlights from her incredible filmography, including Secret Sunshine... END_OF_DOCUMENT_TOKEN_TO_BE_REPLACED
Director Kim Jong-Kwan is well-known to fans of independent Korean cinema. A graduate of the Seoul Institute of the Arts, his short film How to Operate a Polaroid... END_OF_DOCUMENT_TOKEN_TO_BE_REPLACED
We are just one week away from the start of the 2nd Korea International Expat Film Festival (KIXFF).  Festival director Kevin Lambert took some time from his busy schedule to answer questions about the festival which... END_OF_DOCUMENT_TOKEN_TO_BE_REPLACED

Having a film selected to premiere at the Cannes Film Festival is an incredible achievement - having two is quite extraordinary. Yet that is precisely what director Hong Sang-soo has done, as The Day After (그 후) and Claire's Camera (클레어의 카메라) are due to be screened, with both films starring actress Kim Min-hee. Selected for the 'In Competition'... END_OF_DOCUMENT_TOKEN_TO_BE_REPLACED
The Villainess (악녀) has received an explosive trailer in the run-up to its debut at the Cannes Film Festival on May 21st. Appearing in the 'Out of Competition - Midnight Projections' program, writer/director Jung Byung-gil's latest... END_OF_DOCUMENT_TOKEN_TO_BE_REPLACED
Director Bong Joon-ho's Okja (옥자) is almost upon us. The highly anticipated science-fiction/drama is set to premiere In Competition at the Cannes Int. Film Festival on May 19th, before appearing on Korean cinema screens around June... END_OF_DOCUMENT_TOKEN_TO_BE_REPLACED