Fairy tales, when filmed by a director of vision, can be astounding cinematic endeavours. The universe(s) constructed in depicting such fables highlight the stylization, compositional competence, and sense of colour and light of the person at the helm. Yet what truly makes a classic cinematic fairy tale is the morality tale within, the vital life lessons that occur in the evolution of a child into an adult. The shattering of innocence by the harsh outside world and the often problematic romance of the central heroine/hero add layers of tragedy that ground the fantastical narrative into relatable, almost nostalgic, material for audiences. Tim Burton’s Edward Scissorhands, for example, deftly combines the fantasy worlds, socio-cultural critique, and pure romance within his stunning directorial style, a feat which he has never managed to replicate.

A Werewolf Boy (늑대소년) has a lot in common with Edward Scissorhands thematically, but is it’s own unique entity due to the phenomenal visual style of writer/director Jo Sung-hee (조성희). His compositional style, choice of camera shots and angles, and keen eye for colour and lighting make A Werewolf Boy a truly gorgeous visual experience that wonderfully serves to emphasize the mixture of surrealism, horror and romance within the story. That said, the development of certain characters – notably the werewolf boy himself – as well as pacing issues and ambiguous resolution(s) detract from an otherwise sumptuously romantic fairy tale.

As an old woman living in America, Su-ni receives a phone call about the sale of a countryside house her family own. Returning to Korea and visiting the abode with her granddaughter, Su-ni begins to reminisce about the events that occurred there in her youth. The young Su-ni (Park Bo-yeong (박보영) and her family move to the country manner due to her ill health, yet the young girl is also suffering from depression. During unpacking, Su-ni discovers a feral boy, hungry and dirty and in need of care. While waiting for a suitable place to send him, the family take him in and name him Cheol-su (Song Joong-ki (송중기). Initially hesitant, Su-ni begins to train Cheol-su like a dog, bringing the pair closer together. Yet her growing affection for the werewolf boy is noticed by spoilt rich-kid Ji-tae  (Yoo Yeon-seok (유연석) who desires Su-ni for himself, and begins to plot his rival’s downfall. 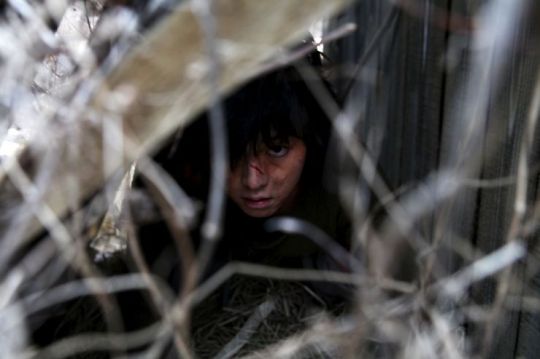 The werewolf boy Cheol-su is found stalking the grounds

As per fairy tale requirements, A Werewolf Boy is bookended by scenes featuring Su-ni as an old woman reminiscing about the past and caught in the moral dilemma of putting that time behind her. Director Jo Sung-hee presents these sequences with a stark realism, draining the colour from the landscape and effectively conveying the area as decrepit and lacking. The juxtaposition between the bookends and the central nostalgic tale is enormous, with the warm colourful hues wonderfully conveying the happiness and magic of Su-ni’s childhood. Indeed, even the colours of the decor and costumes worn by the protagonists reflect the romanticism of the time, while the wondrous use of light breaking through clouds, windows and doors is often beautiful to behold. Combined with the excellent composition and keen sense of space, as well as intriguing camera shots, A Werewolf Boy often appears as if from a painting or illustrated novel, and is quite breathtaking. Scenes such as Su-ni’s discovery of Cheol-su’s dark, shadowy cage is presented in eerie symmetry adding genuine thrills and horror, contrasted with the romantic hues of the children playing football on a hilltop during sunset. A Werewolf Boy is an incredible showcase of the director’s visual style.

The narrative is in-keeping with the visuals through the whimsical romantic tale between Su-ni and Cheol-su, developing their innocent love naturally through an assortment of comical and emotional scenes.  There are also elements of fun silliness to the proceedings with Cheol-su as a half-man/half-wolf which are a natural fit within the sub-genre, but may turn some audiences off. Yet this conveys the sense that the film doesn’t take itself too seriously, adding a light-hearted approach amongst the variety of fairy tale attributes it contains. The fanciful nature does mean however that the impact of social critiques of the ignorance towards war orphans and governmental responsibility are somewhat undermined for the sake of brevity, with the farcical nature of officials belying their statuses as the real monsters within society.

Yet the real ‘monster’ within A Werewolf Boy is spoilt wannabe tycoon Ji-tae, superbly performed by Yoo Yeon-seok. His interpretation of the villainy and arrogance of Ji-tae is incredibly compelling, while his dark clothes and over-zealous yuppie fashion style contribute greatly to the characterisation. Ji-tae’s lust for Su-ni and jealousy regarding Cheol-su forges the classic love triangle at the center of the narrative. Yet this area features one of the film’s biggest weaknesses, as while Su-ni and Ji-tae are developed well the same cannot be said for werewolf boy Cheol-su, perplexing given his status as the titular character. While Su-ni’s innocence and compassion – wonderfully conveyed by Park Bo-yeong – are tested and strengthened, and Ji-tae’s bitterness and resentment grow and fester, Cheol-su generally continues to growl and appear sorrowful. Song Joong-ki does well in expressing emotional distress without the aid of language, yet his role is highly limited within the narrative which is a source of frustration. This underdevelopment, which is also applicable to the (all-too-brief) government officials, results in a finale that is not as strong as it could have been in terms of both romanticism and symbolism. That said, it is during the resolution that Cheol-su finally takes center stage and attempts to fulfill his potential, yet the film is very much Su-ni’s and it is a delight to see a narrative structured around an interesting and fun female protagonist. 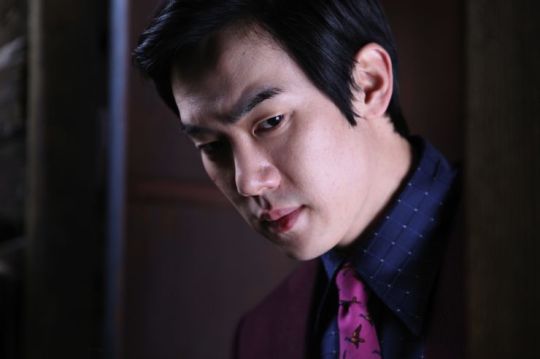 A Werewolf Boy is a beautifully shot, visually stunning fairy tale and a genuine testament to writer/director Jo Sung-hee’s style. The use of colour, lighting and composition work harmoniously together in conveying a wondrous nostalgic tale of innocence and love, ably performed by the cast. While certain protagonists are a tad underdeveloped, A Werewolf Boy is an engaging, highly enjoyable and delightful fable.

For Korean cinema, 2019 was a year that saw the continuation of trends that have been readily apparent for the past several years - an increasing number of big blockbuster/commercially-orientated films with high production values, and the decreasing quality of creative, engaging, and memorable stories. That is not to say the talent has disappeared of... END_OF_DOCUMENT_TOKEN_TO_BE_REPLACED
2018 was quite a bizarre year for Korean cinema. The year began much like any other. The first few months of the year were typically dedicated to family-friendly fare. News of Korean films that were... END_OF_DOCUMENT_TOKEN_TO_BE_REPLACED
While the films released throughout any particular year are indicative of a country's identity, for Korean cinema in 2017 the exploration of political and social issues were especially revealing of the cultural shift that has... END_OF_DOCUMENT_TOKEN_TO_BE_REPLACED

Acclaimed actress Jeon Do-yeon is to be honoured at the 21st Bucheon International Fantastic Film Festival (BiFan) this year, in celebration of her 20 year career that began with Contact back in 1997. Entitled 'Contact, Jeon Do-yeon,' the special program is dedicated to the revered actress and will feature highlights from her incredible filmography, including Secret Sunshine... END_OF_DOCUMENT_TOKEN_TO_BE_REPLACED
Director Kim Jong-Kwan is well-known to fans of independent Korean cinema. A graduate of the Seoul Institute of the Arts, his short film How to Operate a Polaroid... END_OF_DOCUMENT_TOKEN_TO_BE_REPLACED
We are just one week away from the start of the 2nd Korea International Expat Film Festival (KIXFF).  Festival director Kevin Lambert took some time from his busy schedule to answer questions about the festival which... END_OF_DOCUMENT_TOKEN_TO_BE_REPLACED

Having a film selected to premiere at the Cannes Film Festival is an incredible achievement - having two is quite extraordinary. Yet that is precisely what director Hong Sang-soo has done, as The Day After (그 후) and Claire's Camera (클레어의 카메라) are due to be screened, with both films starring actress Kim Min-hee. Selected for the 'In Competition'... END_OF_DOCUMENT_TOKEN_TO_BE_REPLACED
The Villainess (악녀) has received an explosive trailer in the run-up to its debut at the Cannes Film Festival on May 21st. Appearing in the 'Out of Competition - Midnight Projections' program, writer/director Jung Byung-gil's latest... END_OF_DOCUMENT_TOKEN_TO_BE_REPLACED
Director Bong Joon-ho's Okja (옥자) is almost upon us. The highly anticipated science-fiction/drama is set to premiere In Competition at the Cannes Int. Film Festival on May 19th, before appearing on Korean cinema screens around June... END_OF_DOCUMENT_TOKEN_TO_BE_REPLACED
Join 143 other subscribers