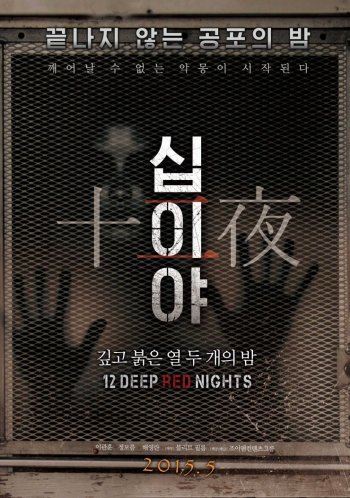 Horror omnibus films are consistently prevalent in Korean cinema, particularly arising at film festivals where directors – who are typically between projects – use the medium to showcase and experiment with their respective aesthetics through the short story form.

Yet while the format allows directors to experiment with their craft, it also inevitably results in comparisons regarding which tale is more effective, an unfortunate byproduct director Oh In-cheon smartly circumvents by helming all four stories within 12 Deep Red Nights: Chapter 1.

Following his well-received feature debut Mourning Grave, director Oh’s 12 Deep Red Nights: Chapter 1 articulates four tales of woe in the dark recesses of Korea after dark which, while competently helmed, disappointingly lack flair and creativity. While disorientating scenes of the urban nightlife are effective, the omnibus seems to be more akin to a practice run for future endeavours as director Oh experiments with pacing and generating suspense, with actual scares in very short supply. That said, it’s interesting how horror is derived from commonplace features of life in the peninsula.

In 1st Night – Driver, a young socialite calls for a driving service to take her home and begs the driver to kill her, promising to bestow all her wealth as a reward. For foreign audiences the notion of this industry will undoubtedly be initially difficult to digest, yet once accepted as commonplace in Korea the tale becomes an intriguing one. Tension is generated well as the driver struggles with the morality of the situation, yet the climax is a letdown.

2nd Night – PM 11:55 sees a female office worker return to her apartment, unknowingly followed by a hooded figure. Tasked with completing a translation assignment before midnight, the woman achieves her goal with five minutes to spare. Yet as she unwinds, the hooded figure begins consistently ringing her door bell and refuses to leave, with the woman unable to contact the outside world for help. PM 11:55 sets up a sense of panic well, clearly inspired by real circumstances. However director Oh seems unsure how to end the story, which comes to an unsatisfying, abrupt end. 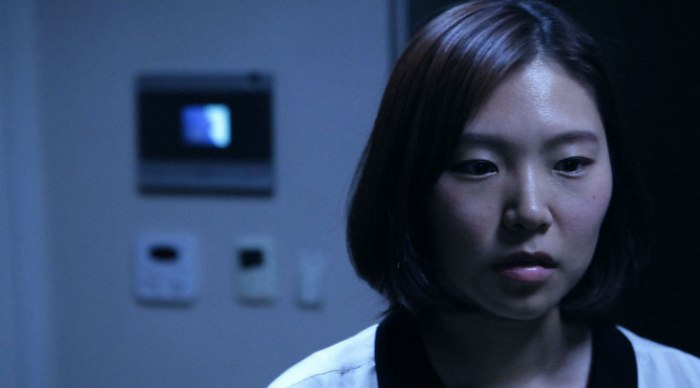 The next tale, 3rd Night – atmosFEAR (or literally Sounds of a Man) is the most impressive in terms of generating an increasingly heightened aura of suspense. An audio technician requires ambient sound for his latest project, and uses his equipment to record the sounds that occur at night. After capturing conversations of couples arguing, he traverses a countryside area for natural ambience. Yet upon hearing a girl’s scream, he follows his recording equipment to investigate the source. While the camerawork and props are employed to created palpable tension, the finale is easily the most disappointing of all the short stories.

Finally, 4th Night – Secret Night tells the tale of junior office worker Yeong-min who attempts to steal company secrets. This segment is the most narratively driven and complete tale within the film, exploring the fraught dynamic between senior and junior company staff in Korea alongside issues of blackmail. Yet while Secret Night is the most structured tale, it’s also the most bland and laborious due to the overly long running time and drawn out story.

Depicting four tales of nightly horror, omnibus 12 Deep Red Nights: Chapter 1 is a competent yet uninspiring addition to director Oh In-cheon’s filmography. The anthology serves more akin to a practice run for future endeavours rather than an inventive take on the genre. While suspense is generated well throughout each story disappointment quickly follows, and is a mediocre effort by a usually solid director.

For Korean cinema, 2019 was a year that saw the continuation of trends that have been readily apparent for the past several years - an increasing number of big blockbuster/commercially-orientated films with high production values, and the decreasing quality of creative, engaging, and memorable stories. That is not to say the talent has disappeared of... END_OF_DOCUMENT_TOKEN_TO_BE_REPLACED
2018 was quite a bizarre year for Korean cinema. The year began much like any other. The first few months of the year were typically dedicated to family-friendly fare. News of Korean films that were... END_OF_DOCUMENT_TOKEN_TO_BE_REPLACED
While the films released throughout any particular year are indicative of a country's identity, for Korean cinema in 2017 the exploration of political and social issues were especially revealing of the cultural shift that has... END_OF_DOCUMENT_TOKEN_TO_BE_REPLACED

Acclaimed actress Jeon Do-yeon is to be honoured at the 21st Bucheon International Fantastic Film Festival (BiFan) this year, in celebration of her 20 year career that began with Contact back in 1997. Entitled 'Contact, Jeon Do-yeon,' the special program is dedicated to the revered actress and will feature highlights from her incredible filmography, including Secret Sunshine... END_OF_DOCUMENT_TOKEN_TO_BE_REPLACED
Director Kim Jong-Kwan is well-known to fans of independent Korean cinema. A graduate of the Seoul Institute of the Arts, his short film How to Operate a Polaroid... END_OF_DOCUMENT_TOKEN_TO_BE_REPLACED
We are just one week away from the start of the 2nd Korea International Expat Film Festival (KIXFF).  Festival director Kevin Lambert took some time from his busy schedule to answer questions about the festival which... END_OF_DOCUMENT_TOKEN_TO_BE_REPLACED

Having a film selected to premiere at the Cannes Film Festival is an incredible achievement - having two is quite extraordinary. Yet that is precisely what director Hong Sang-soo has done, as The Day After (그 후) and Claire's Camera (클레어의 카메라) are due to be screened, with both films starring actress Kim Min-hee. Selected for the 'In Competition'... END_OF_DOCUMENT_TOKEN_TO_BE_REPLACED
The Villainess (악녀) has received an explosive trailer in the run-up to its debut at the Cannes Film Festival on May 21st. Appearing in the 'Out of Competition - Midnight Projections' program, writer/director Jung Byung-gil's latest... END_OF_DOCUMENT_TOKEN_TO_BE_REPLACED
Director Bong Joon-ho's Okja (옥자) is almost upon us. The highly anticipated science-fiction/drama is set to premiere In Competition at the Cannes Int. Film Festival on May 19th, before appearing on Korean cinema screens around June... END_OF_DOCUMENT_TOKEN_TO_BE_REPLACED