Chronicle of a Blood Merchant (허삼관)

In 1953, Gongju City is in the process of rebuilding following the devastating war. Resting for lunch with his fellow workers, Sam-gwan (Ha Jeong-woo (하정우) is ridiculed for his status as a bachelor. Yet upon seeing beautiful Ok-ran (Ha Ji-won (하지원) he becomes instantly smitten and determined to marry her and, after acquiring money through selling his blood and striking a deal with her father, Sam-gwan and Ok-ran are wed. 11 years later, the couple live in relative harmony with their three sons, until a rumour spreads through the village that their eldest boy Il-rak (Nam Da-reum (남다름) actually belongs to Ok-ran’s ex-suitor. As the household is thrown into turmoil by the news, Sam-gwan again finds himself selling blood as the family are forced to redefine their relationships.

Sam-gwan falls for the most beautiful girl in the village, Ok-ran

Based on Yu Hua’s 1995 novel, Chronicle of a Blood Merchant is Ha Jeong-woo’s second attempt at writing and directing duties following Fasten Your Seatbelt and, while generally competently helmed and produced, the comedy-drama features truly abysmal and outrageous sexual politics, plot holes galore, and an intensely dislikable ‘hero’ in the form of Ha’s Sam-gwan.

The premise of Blood Merchant is centered around raising an illegitimate child, and the narrative consistently attempts and fails to generate comedy from the situation. After hearing the rumours regarding eldest son Il-rak’s parentage, Sam-gwan confronts his wife demanding answers and as Ok-ran reluctantly explains how an ex-suitor forced himself upon her, the film has the gall to focus on Sam-gwan’s suffering as a man who didn’t marry a virgin as well as raise a boy biologically not his own. The narrative intends to generate humour by inferring Sam-gwan is a victim of humiliation rather than focusing on Ok-ran’s suffering from the legacy of sexual assault, a strategy which is completely appalling particularly as a source of entertainment. The fact that Sam-gwan then spends the rest of the film punishing Ok-ran for being raped by sulking as well as virtually disowning Il-rak makes the character particularly despicable and impossible to empathise with. It’s a creative decision from which Blood Merchant never recovers and, following on from Sam-gwan’s almost literal ‘purchase’ of Ok-ran in the first act, the comedy-drama is anything but enlightened.

Things change in the finale however as Blood Merchant opts for the oft-used cliche of poor health in order to bring the family together once more. As both writer and director Ha works hard to generate sentiment though the use of melodramatic conventions which work well, yet as Sam-gwan has behaved so dreadfully leading up to the resolution it is especially difficult to invest in his journey, let alone consider him the hero and saviour of the family. Furthermore the gaps in logic are particularly puzzling, for if any man were to undertake the tasks Sam-gwan does, death would be an absolute certainty.

In terms of star power, both Ha Jeong-woo and Ha Ji-won perform capably. Unfortunately they lack any sort of onscreen chemistry and the narrative doesn’t really create opportunities for it to arise, yet individually they do well despite the lack of characterisation. Their presence in Blood Merchant should guarantee that the film will be a greater success than Fasten Your Seatbelt, though ironically the film isn’t really theirs but young actor Nam Da-reum’s. Nam is the heart and soul of the film and it’s his performance as eldest son Il-rak that makes Blood Merchant watchable and entertaining. 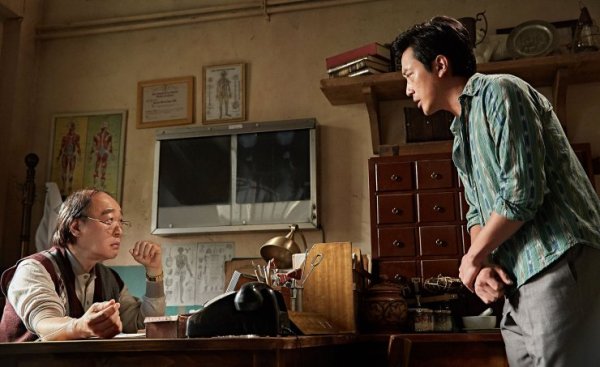 The sale of blood helps the family through tough times

Chronicle of a Blood Merchant is Ha Jeong-woo’s second foray as writer/director, and while he competently helms the comedy drama the shameful sexual politics within the film results in an intensely dislikable lead protagonist. It’s an issue from which the comedy-drama never recovers despite the inclusion of traditional melodramatic conventions in the final act, yet luckily the film is made watchable through the performance of young actor Nam Da-reum.

For Korean cinema, 2019 was a year that saw the continuation of trends that have been readily apparent for the past several years - an increasing number of big blockbuster/commercially-orientated films with high production values, and the decreasing quality of creative, engaging, and memorable stories. That is not to say the talent has disappeared of... END_OF_DOCUMENT_TOKEN_TO_BE_REPLACED
2018 was quite a bizarre year for Korean cinema. The year began much like any other. The first few months of the year were typically dedicated to family-friendly fare. News of Korean films that were... END_OF_DOCUMENT_TOKEN_TO_BE_REPLACED
While the films released throughout any particular year are indicative of a country's identity, for Korean cinema in 2017 the exploration of political and social issues were especially revealing of the cultural shift that has... END_OF_DOCUMENT_TOKEN_TO_BE_REPLACED

Acclaimed actress Jeon Do-yeon is to be honoured at the 21st Bucheon International Fantastic Film Festival (BiFan) this year, in celebration of her 20 year career that began with Contact back in 1997. Entitled 'Contact, Jeon Do-yeon,' the special program is dedicated to the revered actress and will feature highlights from her incredible filmography, including Secret Sunshine... END_OF_DOCUMENT_TOKEN_TO_BE_REPLACED
Director Kim Jong-Kwan is well-known to fans of independent Korean cinema. A graduate of the Seoul Institute of the Arts, his short film How to Operate a Polaroid... END_OF_DOCUMENT_TOKEN_TO_BE_REPLACED
We are just one week away from the start of the 2nd Korea International Expat Film Festival (KIXFF).  Festival director Kevin Lambert took some time from his busy schedule to answer questions about the festival which... END_OF_DOCUMENT_TOKEN_TO_BE_REPLACED

Having a film selected to premiere at the Cannes Film Festival is an incredible achievement - having two is quite extraordinary. Yet that is precisely what director Hong Sang-soo has done, as The Day After (그 후) and Claire's Camera (클레어의 카메라) are due to be screened, with both films starring actress Kim Min-hee. Selected for the 'In Competition'... END_OF_DOCUMENT_TOKEN_TO_BE_REPLACED
The Villainess (악녀) has received an explosive trailer in the run-up to its debut at the Cannes Film Festival on May 21st. Appearing in the 'Out of Competition - Midnight Projections' program, writer/director Jung Byung-gil's latest... END_OF_DOCUMENT_TOKEN_TO_BE_REPLACED
Director Bong Joon-ho's Okja (옥자) is almost upon us. The highly anticipated science-fiction/drama is set to premiere In Competition at the Cannes Int. Film Festival on May 19th, before appearing on Korean cinema screens around June... END_OF_DOCUMENT_TOKEN_TO_BE_REPLACED