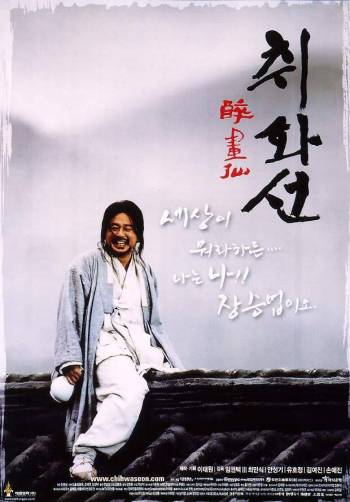 In 1882, the Joseon dynasty is coming to an end. As the country battles with foreign invaders seeking to colonise the region and as corrupt officials tear the country apart from within, Joseon stands on a knife edge. It is at this time that a wealthy Japanese dignitary requests a conference with renowned artist Jang Seung-ub (Choi Min-sik (최민식), one of the greatest painters of the era, in order to purchase his work. Yet when he enquires as to how a man of such humble origins can acquire such talent, Seung-ub merely laughs. The artist recounts his life as a young man in squalor during the mid-19th century, of being saved by kindly scholar Kim Byung-moon (Ahn Sung-gi (안성기), of the development of his skill followed by his strident desperation to go beyond the boundaries of art, of his ever growing addiction to alcohol and women. Through Seung-ub’s story, the history of a country in turmoil and the artistic fervour of the era are revealed.

Chihwaseon – also known as Strokes of Fire, Painted Fire, or more colourfully as Drunk on Women and Poetry – is a lovingly crafted tribute to the beauty and philosophy of traditional Korean art by film maestro Im Kwon-taek, which also notably won the veteran filmmaker the Best Director Award at the Cannes International Film Festival in 2002. The accolade is well-deserved as the drama is absolutely superb in capturing the turbulent spirit of the era through the story of real-life artist Jang Seung-ub. As historical records reveal little in regards to Jang Seung-ub’s life, director Im is free to apply his own brand of artistic license in depicting the great man and he skillfully uses the opportunity to examine Korean traditional artistry and the quest for perfection with palpable devotion. The methodologies and principles employed, the poetry infused within every stroke, even the manner in which such convictions stifled creativity, are all explored through the perspective of Seung-ub which, due to his status as a commoner, often results in affectionately poking fun at the artistic philosophies as much as revering them.

The cinematography and mise-en-scene are captivating throughout Chihwaseon. The visuals wonderfully portray the abject squalor of the artist’s youth in the 1850s as he runs through muddy and poverty-stricken hanok villages, which contrast incredibly effectively with Seung-ub’s later years as he is exposed to the affluence of the middle classes as he serves various masters, before he himself becomes a wealthy man of renown. Such locations provide stunningly poetic backdrops for the journey Seung-ub undertakes as director Im explores the artist’s destructive quest for aesthetic perfection, as his tumultuous personality, as well as critical moments tied to historical circumstance, result in tragic irony in the creation of – and annihilation of – countless masterpieces.

Seung-ub is a drunken, womanising rogue at war with himself

Choi Min-sik utterly excels in portraying Seung-ub as a man at war with himself, desperately seeking to go beyond the limitations of his birth and his craft while drinking and womanising and causing conflict wherever he roams. Yet amazingly the actor never makes him a figure of ridicule but rather a loveable rogue, and certainly one of the most memorable characters in director Im’s filmography.

If there is criticism to be made of Chihwaseon, it comes in the form of the breakneck pace of the film’s early stages. The events that transpire move so quickly during the artist’s formative years that it halts the creation of an empathetic connection, which is of particular import given that his inspiration, motivation, and self-loathing all stem from the period. Following the opening, it’s an issue that the film struggles with throughout as the investment in Seung-ub’s journey ultimately becomes less compelling, yet it’s a testament to director Im’s prowess and Choi Min-sik’s charismatic performance that the drama continues to be engaging. 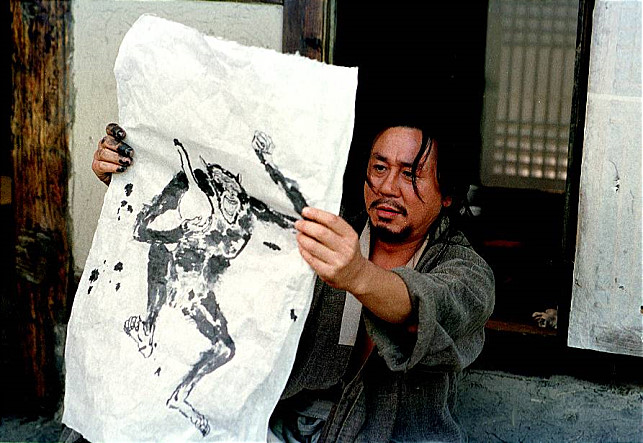 Chihwaseon is a beautifully crafted tribute to traditional Korean artistry by virtuoso director Im Kwon-taek. Featuring stunning locations and mise-en-scene, the period drama is superb in capturing the tumultuous spirit of the era as well as the unbridled dedication to art and poetry, while Choi Min-sik is on top form as charismatic yet self-loathing artist Jang Seung-ub. Chihwaseon is a genuine testament to the creativity and grace of the past masters.

For Korean cinema, 2019 was a year that saw the continuation of trends that have been readily apparent for the past several years - an increasing number of big blockbuster/commercially-orientated films with high production values, and the decreasing quality of creative, engaging, and memorable stories. That is not to say the talent has disappeared of... END_OF_DOCUMENT_TOKEN_TO_BE_REPLACED
2018 was quite a bizarre year for Korean cinema. The year began much like any other. The first few months of the year were typically dedicated to family-friendly fare. News of Korean films that were... END_OF_DOCUMENT_TOKEN_TO_BE_REPLACED
While the films released throughout any particular year are indicative of a country's identity, for Korean cinema in 2017 the exploration of political and social issues were especially revealing of the cultural shift that has... END_OF_DOCUMENT_TOKEN_TO_BE_REPLACED

Acclaimed actress Jeon Do-yeon is to be honoured at the 21st Bucheon International Fantastic Film Festival (BiFan) this year, in celebration of her 20 year career that began with Contact back in 1997. Entitled 'Contact, Jeon Do-yeon,' the special program is dedicated to the revered actress and will feature highlights from her incredible filmography, including Secret Sunshine... END_OF_DOCUMENT_TOKEN_TO_BE_REPLACED
Director Kim Jong-Kwan is well-known to fans of independent Korean cinema. A graduate of the Seoul Institute of the Arts, his short film How to Operate a Polaroid... END_OF_DOCUMENT_TOKEN_TO_BE_REPLACED
We are just one week away from the start of the 2nd Korea International Expat Film Festival (KIXFF).  Festival director Kevin Lambert took some time from his busy schedule to answer questions about the festival which... END_OF_DOCUMENT_TOKEN_TO_BE_REPLACED

Having a film selected to premiere at the Cannes Film Festival is an incredible achievement - having two is quite extraordinary. Yet that is precisely what director Hong Sang-soo has done, as The Day After (그 후) and Claire's Camera (클레어의 카메라) are due to be screened, with both films starring actress Kim Min-hee. Selected for the 'In Competition'... END_OF_DOCUMENT_TOKEN_TO_BE_REPLACED
The Villainess (악녀) has received an explosive trailer in the run-up to its debut at the Cannes Film Festival on May 21st. Appearing in the 'Out of Competition - Midnight Projections' program, writer/director Jung Byung-gil's latest... END_OF_DOCUMENT_TOKEN_TO_BE_REPLACED
Director Bong Joon-ho's Okja (옥자) is almost upon us. The highly anticipated science-fiction/drama is set to premiere In Competition at the Cannes Int. Film Festival on May 19th, before appearing on Korean cinema screens around June... END_OF_DOCUMENT_TOKEN_TO_BE_REPLACED
Join 143 other followers