The 19th Busan International Film Festival (BIFF), which runs from October 2nd (Thu) ~ 11th (Sat), has unveiled the line-up for its 2014 edition.

An impressive 314 films from 79 different countries will be screened during the event. Boasting an array of features from around the world, BIFF will also cast a spotlight on countries such as Iraq, Bangladesh and Lebanon, who have, in a cinematic sense, been somewhat overlooked in the past.

BIFF 2014 will also play host to some of Asia’s biggest films of the year. Chinese auteur Zhang Yimou once again teams up with actress Gong Li for Coming Home, which screened in Cannes earlier this year, in the Gala Presentation. Ann Hui’s highly anticipated period drama The Golden Era, starring Tang Wei, will also feature in the category, while director Hui herself will also be honored with a hand printing ceremony for her contributions to cinema. Meanwhile, A Window on Asian Cinema contains Diao Yinan’s Berlin Golden Bear winner Black Coal, Thin Ice, and the latest work from renowned directors including Takashi Miike’s Over Your Dead Body, Johnnie To’s Don’t Go Breaking My Heart 2, Peter Chan’s Dearest, and Sion Sono’s Tokyo Tribe, respectively.

The World Cinema program also features critically acclaimed work from prolific filmmakers not from Asia, such as David Cronenberg’s Maps to the Stars, Richard Linklater’s  highly championed 12 year project Boyhood, drama Two Days and One Night which had critics raving due to Marion Cotillard’s performance, Asia Argento’s Misunderstood, and UK directors are represented by Michael Winterbottom’s Face of an Angel and Ken Loach’s Jimmy’s Hall, amongst others.

Special Programs in Focus also serves to highlight the attention to diversity. The Power of Georgian Women Filmmakers includes the 1930 film A Story of Mountainous Racha (which was banned until 2013) alongside a host of contemporary offerings, as well as New Turkish Cinema: Faces of the 21st Century, in order to coincide with and celebrate the 100th anniversary of Turkish cinema. 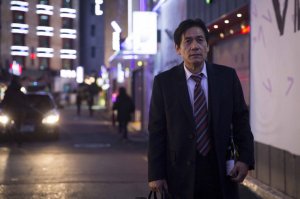 Yet what of Korean film? BIFF 2014 features a quite staggering array of Korean film for the 19th installment, arguably more so than last year. Director Im Kwon-taek‘s 102nd film Revivre, featuring acting legend Ahn Sung-ki, appears in the Gala Presentation section, while in the Open Cinema category (which screens a movie in an outdoor cinema) drama Cart, about women who go on strike in a after receiving unfair dismissal, will be exhibited. The greatest surprise however lies in the Korean Cinema Today – Panorama program. All the big summer hits – Kundo: Age of the Rampant, The Admiral: Roaring Currents, Haemoo (Sea Fog) and The Pirates – all feature alongside July Jung’s acclaimed Cannes hit A Girl at my Door and the latest from auteurs Hong Sang-soo (Hill of Freedom) and Kim Ki-duk (One on One).

Classic Korean films will be celebrated through Korean Cinema Retrospective: Reminiscing the Timeless Filmmaker, Jung Jin-woo. The prolific director, who helmed over 50 films and produced around 110, will have 8 of his of his most famous works screened as well as being honoured with a hand-printing ceremony. 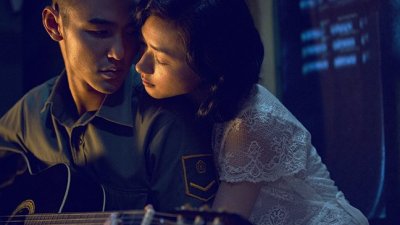 Taiwanese director Doze Chen-Zer Niu’s film is a wartime drama with a romantic/erotic twist. In 1969 a young conscript named Pao is sent to complete his military duties on the island of Kinmen, a notoriously dangerous place due to its proximity to China. Assigned to grueling physical training, Pao’s lack of ability leads to his superiors bestowing a new mission for the youngster, placing him in charge at Unit 831. Yet Unit 831 is actually military code for the brothels situated on the frontline of the war, used against China should they decide to attack. As Pao witnesses human rights abuses within the oppressive military system he struggles to retain his sanity, yet as he forms a relationship with Nini, one of the women who work at the brothel, his resolve to save his virginity for his girlfriend back home becomes tested.

Starring Ethan Juan and Wan Qian in the romantic lead roles, Paradise in Service is also produced by celebrated director/producer Hou Hsiao-Hsien. See below for the trailer.

For more information about the 19th Busan International Film Festival, including the full line-up of films to be screened, please click here to visit the official website.

For Korean cinema, 2019 was a year that saw the continuation of trends that have been readily apparent for the past several years - an increasing number of big blockbuster/commercially-orientated films with high production values, and the decreasing quality of creative, engaging, and memorable stories. That is not to say the talent has disappeared of... END_OF_DOCUMENT_TOKEN_TO_BE_REPLACED
2018 was quite a bizarre year for Korean cinema. The year began much like any other. The first few months of the year were typically dedicated to family-friendly fare. News of Korean films that were... END_OF_DOCUMENT_TOKEN_TO_BE_REPLACED
While the films released throughout any particular year are indicative of a country's identity, for Korean cinema in 2017 the exploration of political and social issues were especially revealing of the cultural shift that has... END_OF_DOCUMENT_TOKEN_TO_BE_REPLACED

Acclaimed actress Jeon Do-yeon is to be honoured at the 21st Bucheon International Fantastic Film Festival (BiFan) this year, in celebration of her 20 year career that began with Contact back in 1997. Entitled 'Contact, Jeon Do-yeon,' the special program is dedicated to the revered actress and will feature highlights from her incredible filmography, including Secret Sunshine... END_OF_DOCUMENT_TOKEN_TO_BE_REPLACED
Director Kim Jong-Kwan is well-known to fans of independent Korean cinema. A graduate of the Seoul Institute of the Arts, his short film How to Operate a Polaroid... END_OF_DOCUMENT_TOKEN_TO_BE_REPLACED
We are just one week away from the start of the 2nd Korea International Expat Film Festival (KIXFF).  Festival director Kevin Lambert took some time from his busy schedule to answer questions about the festival which... END_OF_DOCUMENT_TOKEN_TO_BE_REPLACED

Having a film selected to premiere at the Cannes Film Festival is an incredible achievement - having two is quite extraordinary. Yet that is precisely what director Hong Sang-soo has done, as The Day After (그 후) and Claire's Camera (클레어의 카메라) are due to be screened, with both films starring actress Kim Min-hee. Selected for the 'In Competition'... END_OF_DOCUMENT_TOKEN_TO_BE_REPLACED
The Villainess (악녀) has received an explosive trailer in the run-up to its debut at the Cannes Film Festival on May 21st. Appearing in the 'Out of Competition - Midnight Projections' program, writer/director Jung Byung-gil's latest... END_OF_DOCUMENT_TOKEN_TO_BE_REPLACED
Director Bong Joon-ho's Okja (옥자) is almost upon us. The highly anticipated science-fiction/drama is set to premiere In Competition at the Cannes Int. Film Festival on May 19th, before appearing on Korean cinema screens around June... END_OF_DOCUMENT_TOKEN_TO_BE_REPLACED
Join 143 other followers