In a seedy, crime-ridden city a young woman named Mizo (Lee Hyo (이효) forms a strange sexual relationship with brutal low-life thug Woo-sang (Yoon Dong-hwan (윤동환). As their love/hate affair develops, Mizo discovers that the extremely violent Woo-sang was a former detective, turning his back on the law following a shocking scandal with a bar-girl (Sin So-mi (신소미). Much to the chagrin of Woo-sang, his old girlfriend is now living with a small-time local gangster (Lee Jeong-yong (이정용), and the men clash over both her and Mizo. Yet the enigmatic Mizo is harboring a secret and an overpowering desire for revenge that could bring about the ruination of them all.

Mizo and Woo-sang have a violently sexual relatonship

Mizo is a film of excess in almost every respect, but then perhaps that’s to be expected from director Nam Gi-woong (남기웅), who previously helmed Teenage Hooker Became a Killing Machine in 2009. It is probably also unsurprising that the film is laced with misogyny. Indeed, shortly after the film begins Mizo is located within a motel instigating, as well as simultaneously enjoying and being a victim of, violent sexual intercourse with a man twice her age. This would be fine, of course, if the film were exploring the fraught life of a young prostitute yet no efforts are made to do so as director Nam appears more interested in shocking spectacle rather than introspection.

To his credit, director Nam does employ plenty of such displays through using taboo subjects, and fans of such stylisation will undoubtedly find much to be entertain by. The world that he has constructed is a dark and vice-filled underworld of sex and violence, and the altercations that arise between characters are often quite visceral and barbaric. Typically the motivations behind the violent confrontation involve Mizo and/or Woo-sang’s ex-girlfriend, with the men on either side fighting for ownership over one or both of them. Enlightened it is not.

Mizo faces her nemesis and rival for Woo-sang’s affections

Either way, it is extremely difficult to care who wins any conflict due to the woeful characterisation and absurdity of events. Two-dimension stereotypes are employed throughout the entirety of the film to the point of genuine annoyance. Woo-sang is a lumbering Neanderthal with zero redeeming qualities; Woo-sang’s rival, the small-time crook who ‘stole’ his ex, merely shouts and swears at every opportunity; and the bar madam is simply a victim waiting to be saved. As the titular protagonist Mizo escapes such treatment somewhat, but usually because she flits from one stereotype to the next creating an aura of unpredictability.

As Mizo, newbie actress Lee Hyo performs well. While the role itself is limited, Lee Hyo conveys a strong sense of melancholy in conjunction with quirks pertaining to being psychologically unbalanced. Her performance is ultimately what holds the entire film together as while the narrative itself is quite predictable, she is anything but. For much of the running time Lee Hyo is required to be aloof and unbalanced, yet when she has the opportunity to delve deeper into emotional material she does so in a melodramatic, but competent fashion. 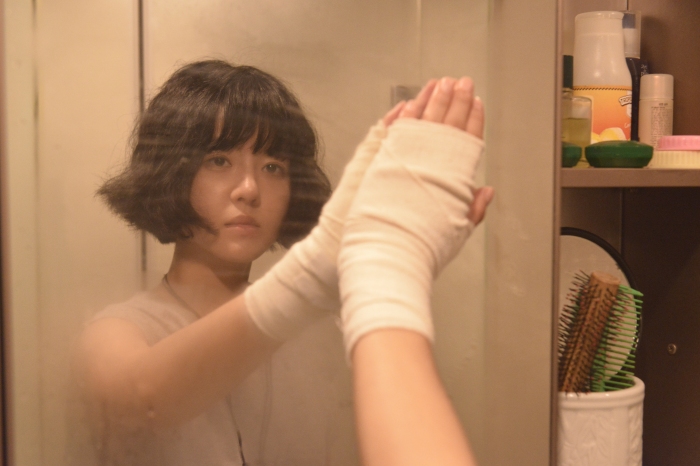 Mizo’s intentions remain quite an enigma throughout the film

Mizo is a drama of sexual and violent excess, but then perhaps that’s to be expected from director Nam Gi-woong, who was previously responsible for Teenage Hooker Was A Killing Machine. For fans of such spectacle, Mizo will quite likely be entertained and to his credit director Nam constructs a believable environment within which it occurs. However the film is blighted by a poor script and terrible characterisation, while the narrative is ultimately quite absurd. Newbie actress Lee Hyo holds the drama together well with a lofty, unpredictable aura yet introspective Mizo certainly is not.

For Korean cinema, 2019 was a year that saw the continuation of trends that have been readily apparent for the past several years - an increasing number of big blockbuster/commercially-orientated films with high production values, and the decreasing quality of creative, engaging, and memorable stories. That is not to say the talent has disappeared of... END_OF_DOCUMENT_TOKEN_TO_BE_REPLACED
2018 was quite a bizarre year for Korean cinema. The year began much like any other. The first few months of the year were typically dedicated to family-friendly fare. News of Korean films that were... END_OF_DOCUMENT_TOKEN_TO_BE_REPLACED
While the films released throughout any particular year are indicative of a country's identity, for Korean cinema in 2017 the exploration of political and social issues were especially revealing of the cultural shift that has... END_OF_DOCUMENT_TOKEN_TO_BE_REPLACED

Acclaimed actress Jeon Do-yeon is to be honoured at the 21st Bucheon International Fantastic Film Festival (BiFan) this year, in celebration of her 20 year career that began with Contact back in 1997. Entitled 'Contact, Jeon Do-yeon,' the special program is dedicated to the revered actress and will feature highlights from her incredible filmography, including Secret Sunshine... END_OF_DOCUMENT_TOKEN_TO_BE_REPLACED
Director Kim Jong-Kwan is well-known to fans of independent Korean cinema. A graduate of the Seoul Institute of the Arts, his short film How to Operate a Polaroid... END_OF_DOCUMENT_TOKEN_TO_BE_REPLACED
We are just one week away from the start of the 2nd Korea International Expat Film Festival (KIXFF).  Festival director Kevin Lambert took some time from his busy schedule to answer questions about the festival which... END_OF_DOCUMENT_TOKEN_TO_BE_REPLACED

Having a film selected to premiere at the Cannes Film Festival is an incredible achievement - having two is quite extraordinary. Yet that is precisely what director Hong Sang-soo has done, as The Day After (그 후) and Claire's Camera (클레어의 카메라) are due to be screened, with both films starring actress Kim Min-hee. Selected for the 'In Competition'... END_OF_DOCUMENT_TOKEN_TO_BE_REPLACED
The Villainess (악녀) has received an explosive trailer in the run-up to its debut at the Cannes Film Festival on May 21st. Appearing in the 'Out of Competition - Midnight Projections' program, writer/director Jung Byung-gil's latest... END_OF_DOCUMENT_TOKEN_TO_BE_REPLACED
Director Bong Joon-ho's Okja (옥자) is almost upon us. The highly anticipated science-fiction/drama is set to premiere In Competition at the Cannes Int. Film Festival on May 19th, before appearing on Korean cinema screens around June... END_OF_DOCUMENT_TOKEN_TO_BE_REPLACED