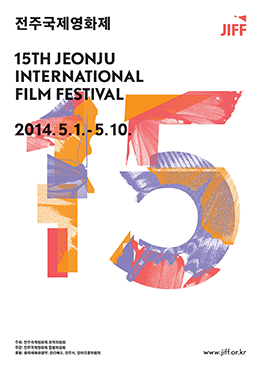 The 2014 Jeonju International Film Festival (JIFF) is due to commence from May the 1st through to the 10th.

Now in its 15th installment, JIFF has long been the festival for showcasing up and coming Korean independent talent as well as serving as a platform for international indies to receive attention. This year is of course no exception, as new features have added and programs extended in conjunction with the traditional core categories.

This year however sees not only an array of new Korean filmmakers but also some of the most renowned and reputable names in the independent film industry screening their latest work. Furthermore, the festival design is clearly emphasising JIFF as a celebration of elegance and subtle sincerity, as can be viewed in the trailer below.

The big change at JIFF 2014 lies in the greater focus on Korean films. Korea Cinemascape has now become a distinct program in its own right, and while previously more mainstream Korean films were integrated within, the focus has now shifted to more independent and low-budget productions. As such, there are some big names in indie cinema within Korea Cinemascape this year, including Lee Song Hee-il (White Night), Lee Sang-woo (Barbie) and Kim Kyung-mook (Stateless Things), as well as a greater number of world premieres which further cement JIFF’s reputation for discovering new talent.

In addition, two of JIFF’s staple programs – Jeonju Digital Project and Short! Short! Short! – have been amalgamated in order to enhance the overall quality of the productions as well as elevating the films into features. This year, two of of the three films are helmed by Korean directors.

MAD SAD BAD is a fascinating and exciting departure from traditional opening films. The 3D omnibus is helmed by three of Korea’s extremely talented directors. In Ghost, director Ryoo Seung-wan (The Berlin File) explores the life of a high school student who retreats from the world and instead finds purpose talking with a girl on SNS. The segment stars red hot indie star Lee David (Pluto, Poetry), Kwak Do-wan (The Attorney, National Security) and model Son Soo-hyeon in her acting debut, while the film itself is based on a true story. In futuristic zombie film I Saw You, director Han Ji-seung (Papa) plays with a variety of genres as he portrays the undead as factory workers. Featuring Park Ki-woong (Secretly Greatly) and kpop star See Ya’s Nam Gyoo-ri (Death Bell), the romantic musical horror will certainly be an attractive affair. Rounding out the omnibus is Picnic by director Kim Tae-yong (You Are More Than Beautiful). When a young girl loses her autistic brother on a picnic trip, her frantic search calls forth the realms of her imagination inspired from her beloved comic books. Child actress Kim Soo-an (Hide and Seek) stars.

Please see below for the MAD SAD BAD trailer.

For Korean cinema, 2019 was a year that saw the continuation of trends that have been readily apparent for the past several years - an increasing number of big blockbuster/commercially-orientated films with high production values, and the decreasing quality of creative, engaging, and memorable stories. That is not to say the talent has disappeared of... END_OF_DOCUMENT_TOKEN_TO_BE_REPLACED
2018 was quite a bizarre year for Korean cinema. The year began much like any other. The first few months of the year were typically dedicated to family-friendly fare. News of Korean films that were... END_OF_DOCUMENT_TOKEN_TO_BE_REPLACED
While the films released throughout any particular year are indicative of a country's identity, for Korean cinema in 2017 the exploration of political and social issues were especially revealing of the cultural shift that has... END_OF_DOCUMENT_TOKEN_TO_BE_REPLACED

Acclaimed actress Jeon Do-yeon is to be honoured at the 21st Bucheon International Fantastic Film Festival (BiFan) this year, in celebration of her 20 year career that began with Contact back in 1997. Entitled 'Contact, Jeon Do-yeon,' the special program is dedicated to the revered actress and will feature highlights from her incredible filmography, including Secret Sunshine... END_OF_DOCUMENT_TOKEN_TO_BE_REPLACED
Director Kim Jong-Kwan is well-known to fans of independent Korean cinema. A graduate of the Seoul Institute of the Arts, his short film How to Operate a Polaroid... END_OF_DOCUMENT_TOKEN_TO_BE_REPLACED
We are just one week away from the start of the 2nd Korea International Expat Film Festival (KIXFF).  Festival director Kevin Lambert took some time from his busy schedule to answer questions about the festival which... END_OF_DOCUMENT_TOKEN_TO_BE_REPLACED

Having a film selected to premiere at the Cannes Film Festival is an incredible achievement - having two is quite extraordinary. Yet that is precisely what director Hong Sang-soo has done, as The Day After (그 후) and Claire's Camera (클레어의 카메라) are due to be screened, with both films starring actress Kim Min-hee. Selected for the 'In Competition'... END_OF_DOCUMENT_TOKEN_TO_BE_REPLACED
The Villainess (악녀) has received an explosive trailer in the run-up to its debut at the Cannes Film Festival on May 21st. Appearing in the 'Out of Competition - Midnight Projections' program, writer/director Jung Byung-gil's latest... END_OF_DOCUMENT_TOKEN_TO_BE_REPLACED
Director Bong Joon-ho's Okja (옥자) is almost upon us. The highly anticipated science-fiction/drama is set to premiere In Competition at the Cannes Int. Film Festival on May 19th, before appearing on Korean cinema screens around June... END_OF_DOCUMENT_TOKEN_TO_BE_REPLACED
Join 143 other subscribers