The 5th DMZ Korean International Documentary Film Festival – or DMZ Docs for short – is due to commence this Thursday the 17th of October and will run through to Wednesday the 23rd.

While the opening ceremony will take place at the DMZ as usual, the rest of the festival has been moved to Lotte Cinema in La Festa, next to Jeongbalsan Station, Ilsan.

DMZ Docs will feature 119 films from 38 countries during its run, all of which are divided within various programs bringing focus to social issues from around the world. There are three competition categories – International, Korean, and Youth – while the non-competition arena includes sections such as Global Vision, Docs For All! and Masters respectively.

Opening the 2013 installment of DMZ Docs will be Manshin: Ten Thousand Spirits (만신) by director Park Chan-kyong (박찬경), who has made quite a reputation for himself helming films such as Night Fishing (파란만장) and Day Trip (청출어람) alongside his brother Park Chan-wook.

For the official DMZ Docs festival trailer, as well as information on opening film Manshin, please see below. 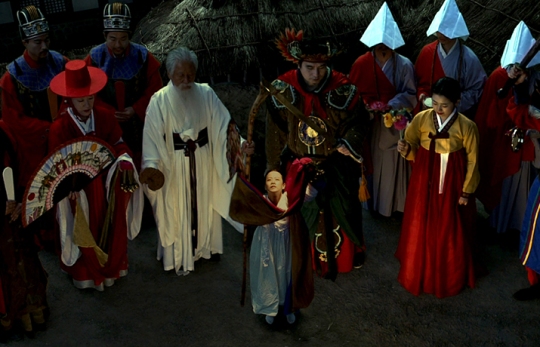 Director Park Chan-kyong explores the life of shaman Kim Geun-hwa in Manshin: Ten Thousand Spirits (만신). Ever since the end of the Korean War, Korean culture has had a tumultuous relationship with the past and the present. In order to develop and establish the country as an economic powerhouse,  traditions have often been swept aside in the ferocious adoption of capitalist ideology – shamanism included. Despite such oppression, shaman Kim has established herself as one of the country’s leading figures in the arena, earning the title of National Shaman. The film stars actresses Kim Sae-ron, Ryoo Hyoun-Kyoung, and Moon So-ri in the role of shaman Kim as the autobiographical story presents her complex and traumatic life.

For the full listing of all the programs and films due to take place at DMZ Docs, please visit the official website here.

For Korean cinema, 2019 was a year that saw the continuation of trends that have been readily apparent for the past several years - an increasing number of big blockbuster/commercially-orientated films with high production values, and the decreasing quality of creative, engaging, and memorable stories. That is not to say the talent has disappeared of... END_OF_DOCUMENT_TOKEN_TO_BE_REPLACED
2018 was quite a bizarre year for Korean cinema. The year began much like any other. The first few months of the year were typically dedicated to family-friendly fare. News of Korean films that were... END_OF_DOCUMENT_TOKEN_TO_BE_REPLACED
While the films released throughout any particular year are indicative of a country's identity, for Korean cinema in 2017 the exploration of political and social issues were especially revealing of the cultural shift that has... END_OF_DOCUMENT_TOKEN_TO_BE_REPLACED

Acclaimed actress Jeon Do-yeon is to be honoured at the 21st Bucheon International Fantastic Film Festival (BiFan) this year, in celebration of her 20 year career that began with Contact back in 1997. Entitled 'Contact, Jeon Do-yeon,' the special program is dedicated to the revered actress and will feature highlights from her incredible filmography, including Secret Sunshine... END_OF_DOCUMENT_TOKEN_TO_BE_REPLACED
Director Kim Jong-Kwan is well-known to fans of independent Korean cinema. A graduate of the Seoul Institute of the Arts, his short film How to Operate a Polaroid... END_OF_DOCUMENT_TOKEN_TO_BE_REPLACED
We are just one week away from the start of the 2nd Korea International Expat Film Festival (KIXFF).  Festival director Kevin Lambert took some time from his busy schedule to answer questions about the festival which... END_OF_DOCUMENT_TOKEN_TO_BE_REPLACED

Having a film selected to premiere at the Cannes Film Festival is an incredible achievement - having two is quite extraordinary. Yet that is precisely what director Hong Sang-soo has done, as The Day After (그 후) and Claire's Camera (클레어의 카메라) are due to be screened, with both films starring actress Kim Min-hee. Selected for the 'In Competition'... END_OF_DOCUMENT_TOKEN_TO_BE_REPLACED
The Villainess (악녀) has received an explosive trailer in the run-up to its debut at the Cannes Film Festival on May 21st. Appearing in the 'Out of Competition - Midnight Projections' program, writer/director Jung Byung-gil's latest... END_OF_DOCUMENT_TOKEN_TO_BE_REPLACED
Director Bong Joon-ho's Okja (옥자) is almost upon us. The highly anticipated science-fiction/drama is set to premiere In Competition at the Cannes Int. Film Festival on May 19th, before appearing on Korean cinema screens around June... END_OF_DOCUMENT_TOKEN_TO_BE_REPLACED