It goes without saying that the films of Quentin Tarantino have left an indelible impression on the cinematic landscape. This is especially the case with Pulp Fiction, whereby the amalgamation of extreme violence, pop culture, and variety of narrative threads have invited a host of admirers and homages. Director Ryoo Seung-wan (류승완) fits both areas, consistently expressing similar themes throughout his body of work albeit with his own Korean flair. Indeed, his nickname as ‘the Korean Tarantino’ is not entirely undeserved.

No Blood No Tears (피도 눈물도 없이), director Ryoo Seung-wan’s second feature, has clearly taken gangster films such as Pulp Fiction and Snatch as huge sources of inspiration, featuring a multi-strand narrative with an assortment of colorful low lives and gangsters seeking the perfect score. Being a Korean production, there is also a great deal of Confucian ideals and martial arts added to the mix for good measure. It’s a largely enjoyable ensemble piece featuring some wonderful character actors, yet the disparate narratives never coalesce convincingly, in addition to the vast number of protagonists, tonal imbalances, and blatant misogyny that permeates throughout the story.

Gyung-sun (Lee Hye-yeong, 이혜영), a down-on-her-luck taxi driver, is continually harassed by loan sharks seeking debt collection and the police for her criminal past. While attempting to forge a life for herself despite awful passengers, her taxi is hit by Su-jin (Jeon Do-yeon, 전도연) who is on the run from her violent boyfriend Dok-bul (Jeong Jae-yeong, 정재영). A former boxing champion, Dok-bul works for the aging local kingpin KGB, or Kim Geun-bok (Sin Goo, 신구) whose power base is unchallengeable particularly while flanked by martial arts master the Silent Man (Jeong Doo-hong, 정두홍). Unknown to KGB however, is that everyone around him is conspiring to steal his fortune, even local karaoke worker Chae Min-su (Ryoo Seung-beom, 류승범). 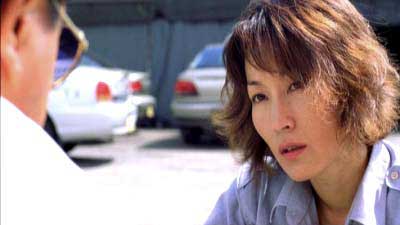 Gyeong-sun has trouble with loan sharks and the police

One of the great strengths of No Blood No Tears is the gritty, violence-fueled world of Incheon inhabited by the array of gangsters and charlatans. The aesthetics employed by director Ryoo Seung-wan, such as the wonderful use of low key lighting, convey an urban landscape fraught with danger and violence, while the dilapidated arenas in which confrontations occur lends a disturbing sense of realism to the proceedings. Within this world are a vast number of protagonists, each with their own foibles and agendas, all connected with one another through various relationships and each strand unfolds in a thoroughly entertaining manner. As such comparisons with Pulp Fiction are inevitable, particularly as director Ryoo Seung-wan uses similar non-linear editing techniques in which to orchestrate events, although he later succumbs to traditional linear storytelling. Unfortunately however, with so many characters the director doesn’t manage to balance the vast number of plot threads and therefore underdevelopment of key personnel is a profound issue throughout the film. This is acutely the case with indebted taxi driver Gyeong-sun and wannabe pop starlet Su-jin, who are the masterminds behind the heist but are forced to the sidelines while focus is granted to the male roles. The intention is clearly a Thelma and Louise style narrative whereby two unlikely women join forces to take on a male-dominated world, yet as well as lack of development the film contains some frankly awful misogyny as Gyeong-sun and Su-jin are repeatedly beaten to an absurd degree by the men around them.

Stylised violence is one of director Ryoo Seung-wan’s greatest assets, and when not used to abuse the female characters, it is a genuine delight. Of particular note is the confrontation between retired boxer Dok-bul and the Silent Man, which features some lightning fast and bone crunching moves made all the more powerful through utilizing the gritty realism of Incheon’s underworld. The blood, sweat, and deft use of light and shadow are exhilarating to behold as the men fight for their lives – and their stake of the money – within the battleground of a dog fighting cage, and is a testament to the director’s skill and flair for action sequences. 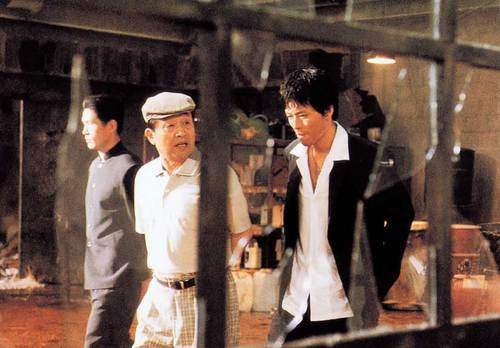 KGB gives orders to Dok-bul, while flanked by the Silent Man

The violence is also accompanied by a healthy dose of black comedy through humorous use of bad language and bizarre confrontations between the eccentric characters. While not as sophisticated as the films which inspired it, the comedy within No Blood No Tears is still highly enjoyable. A large amount of humor is left to the director’s brother, Ryoo Seung-beom, as dim-witted karaoke worker Chae Min-su. Unfortunately this tends to be slapstick in nature, although there are laugh-out-loud moments to be had. Most of the comedy appears through the double-crosses and surprise encounters as everyone attempts to outsmart each other and disappear with the money, and the quick pace as events unfold is entertaining. It is, however, difficult to be fully invested in the antics as Gyeong-sun and Su-jin tend to have little involvement in the robbery despite their central roles in the film, while villainous thug Dok-bul seems to emerge as an anti-hero of sorts, only for things to later reverse in an attempt to wrap all the narrative threads up nicely. As such, while certainly enjoyable, the finale is lacking in compulsion making the film somewhat hollow and bittersweet as the credits begin to role.

No Blood No Tears is a gritty, urban tale of gangsters and charlatans in a Korea-meets-Pulp Fiction style. Director Ryoo Seung-wan has crafted a world of danger and violence with expert use of lighting and environments, while his trademark of stylized action is exhilarating to behold. Yet the unbalanced narrative and lack of character development due to the enormous cast results in a lack of investment, particularly with the central female roles, who suffer from awful misogynistic abuse throughout the film. No Blood No Tears is ultimately an enjoyable, though uneven, gangster romp.

For Korean cinema, 2019 was a year that saw the continuation of trends that have been readily apparent for the past several years - an increasing number of big blockbuster/commercially-orientated films with high production values, and the decreasing quality of creative, engaging, and memorable stories. That is not to say the talent has disappeared of... END_OF_DOCUMENT_TOKEN_TO_BE_REPLACED
2018 was quite a bizarre year for Korean cinema. The year began much like any other. The first few months of the year were typically dedicated to family-friendly fare. News of Korean films that were... END_OF_DOCUMENT_TOKEN_TO_BE_REPLACED
While the films released throughout any particular year are indicative of a country's identity, for Korean cinema in 2017 the exploration of political and social issues were especially revealing of the cultural shift that has... END_OF_DOCUMENT_TOKEN_TO_BE_REPLACED

Acclaimed actress Jeon Do-yeon is to be honoured at the 21st Bucheon International Fantastic Film Festival (BiFan) this year, in celebration of her 20 year career that began with Contact back in 1997. Entitled 'Contact, Jeon Do-yeon,' the special program is dedicated to the revered actress and will feature highlights from her incredible filmography, including Secret Sunshine... END_OF_DOCUMENT_TOKEN_TO_BE_REPLACED
Director Kim Jong-Kwan is well-known to fans of independent Korean cinema. A graduate of the Seoul Institute of the Arts, his short film How to Operate a Polaroid... END_OF_DOCUMENT_TOKEN_TO_BE_REPLACED
We are just one week away from the start of the 2nd Korea International Expat Film Festival (KIXFF).  Festival director Kevin Lambert took some time from his busy schedule to answer questions about the festival which... END_OF_DOCUMENT_TOKEN_TO_BE_REPLACED

Having a film selected to premiere at the Cannes Film Festival is an incredible achievement - having two is quite extraordinary. Yet that is precisely what director Hong Sang-soo has done, as The Day After (그 후) and Claire's Camera (클레어의 카메라) are due to be screened, with both films starring actress Kim Min-hee. Selected for the 'In Competition'... END_OF_DOCUMENT_TOKEN_TO_BE_REPLACED
The Villainess (악녀) has received an explosive trailer in the run-up to its debut at the Cannes Film Festival on May 21st. Appearing in the 'Out of Competition - Midnight Projections' program, writer/director Jung Byung-gil's latest... END_OF_DOCUMENT_TOKEN_TO_BE_REPLACED
Director Bong Joon-ho's Okja (옥자) is almost upon us. The highly anticipated science-fiction/drama is set to premiere In Competition at the Cannes Int. Film Festival on May 19th, before appearing on Korean cinema screens around June... END_OF_DOCUMENT_TOKEN_TO_BE_REPLACED