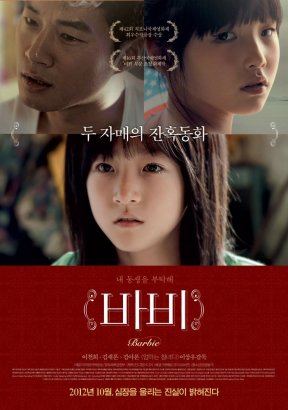 Director Lee Sang-woo (이상우) has earned the moniker of the ‘ogre of independent cinema’, a title which he is interestingly in favor of. The titles in his filmography attest to his desire to explore controversial subjects, notably Mother is a Whore (엄마는 창녀다) (2009) and Father is a Dog (아버지는 개다) (2010), both of which scrutinize the Korean family unit. As such, the influential director’s films are fascinating insights into taboo subjects often ignored by mainstream cinema.

With Barbie, the topic of international adoption is broached yet throughout the narrative director Lee Sang-woo also examines the concept of the ‘American dream’, the materialism within Korean society, and the poverty and human rights abuses that impact those living on the fringes of contemporary society. The film is a fascinating perspective on such an array of controversial subjects and, while it does takes some time to establish the story, Barbie is an incredibly compelling and poignant production.

Soon-yeong  (Kim Sae-ron (김새론) and her sickly younger sister Soon-ja (Kim Ah-ron (김아론), live with their mentally ill father on the coast of Pohang city. Life is extremely difficult for the family, and while Soon-yeong diligently takes care of everyone her sister dreams of escape. Their uncle Mang-taek  (Lee Cheon-hee (이천희) exploits them all in running his coastal motel where drunks and vagrants frequent. Yet everything changes when Mang-taek’s associate, an American named Steve (Earl Jackson) arrives with his daughter Barbie (Cat Tebo) with an offer to take Soon-yeong back to the USA for ‘a better life’. With the family thrown into chaos, and Steve’s motivations becoming increasingly unclear, Soon-yeong and Soon-ja must make decisions that will change them forever. 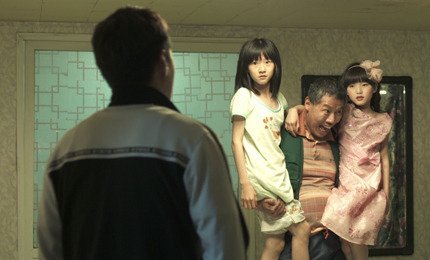 Soon-yeon, Soon-ja and their father have their lives turned upside down by Mang-taek

The world of Barbie  – the coastal area of Pohang City – is expertly constructed as a nihilistic purgatory by director Lee Sang-woo. The bleakness of the surroundings and the poverty that afflicts Soon-yeon’s family is palpable, while the vagrants and sexual predators that move in and out of their lives bring a genuine sense of danger to their well-being. The director constantly challenges the family with the society and culture that surrounds them, allowing for a slow-paced yet highly interesting examination of those struggling to survive in contemporary Korea. With no mother and a mentally ill father, it’s down to Soon-yeon to take on the roles of mother for her sibling Soon-ja, as well as wife and bread-winner as she sells home-made accessories and prepares meals. Yet the real tragedy lies in the fact her efforts are never appreciated, as her father cannot articulate his affection while Soon-ja has grown to despise the life into which she has been born, fantasizing of an escape of make-up and pretty dresses. Such protagonists are complex and acutely difficult to portray, yet the casting of real-life sisters Kim Sae-ron and Kim Ah-ron is an absolute masterstroke. The two young actresses are simply wonderful in conveying not only their poverty-stricken lifestyle, but also how it has forged them into very different beings. Kim Sae-ron, who has honed her talent through films such as The Man From Nowhere and Neighbors, is startlingly poignant throughout Barbie as her indomitable spirit overcomes the heartache before her. Yet younger sister Kim Ah-ron continually threatens to steal the show with her vehement bitterness towards those around her and the desperate attempts to make her fantasy of becoming a princess a reality. However, Soon-ja’s poor health always brings her back to the homestead and Soon-yeon’s care, adding further layers of nuance in exploring the family unit.

The notion of escape is ultimately provided by uncle Mang-taek, and his associate Steve. Mang-taek is a shockingly awful parental figure due to his abusive language and the manner in which he treats the young girls, bullying and insulting them to get what he wants. His awareness of their plight, and his refusal to share the burden, adds further animosity to his untrustworthy nature. His relationship with Steve is complex to say the least, with the two secretive men disliking and reviling yet needing one another, allegorizing the nature of Korean and American ties. While Mang-taek curses Steve with racial slurs and offenses under his breath, Steve openly displays his detest of Korea in a similarly offensive fashion, highlighting their mutual dislike and lack of cultural understanding yet are forced to work together. Furthermore, director Lee Sang-woo continually emphasises the wealth gap between them through contrasting the luxurious arenas in which Steve and daughter Barbie inhabit, with the extreme poverty occupied by Soon-yeon’s family. Hope appears, however, through the burgeoning friendship between Soon-yeon and Barbie. While they cannot communicate there is an unspoken mutual respect which the director uses to explore the generational ideological differences.

The crux of Barbie’s narrative is the adoption of Soon-yeong by Steve, yet her friendship with his daughter angers him to an unreasonable degree. The plot takes an incredibly long time to explore why this is the case, yet when it finally arrives the film shines as one of the most compelling and poignant pieces of independent cinema of 2012. The contrast between Soon-yeon, who wishes to stay, and Soon-ja, who wishes to go, is central in exploring the concept of the Korean family as well as the dream of America as a land of opportunity and escape. The bittersweet nature of both philosophies are wonderfully conveyed by director Lee Sang-woo, and his approach leaves a lasting and indelible impression.

Soon-ja dreams of America as an escape from poverty

Barbie is a highly compelling and poignant drama from director Lee Sang-woo that explores an incredible array of social issues within contemporary Korea. As with the director’s previous work the focus is squarely on interrogating the family unit, yet the inclusion of international adoption allows for an expansion in highlighting a variety of socio-cultural themes and issues. While it takes the film quite some time to get going, Barbie serves as a powerful reminder of the issues facing those in poverty and leaves an indelible impression.

For Korean cinema, 2019 was a year that saw the continuation of trends that have been readily apparent for the past several years - an increasing number of big blockbuster/commercially-orientated films with high production values, and the decreasing quality of creative, engaging, and memorable stories. That is not to say the talent has disappeared of... END_OF_DOCUMENT_TOKEN_TO_BE_REPLACED
2018 was quite a bizarre year for Korean cinema. The year began much like any other. The first few months of the year were typically dedicated to family-friendly fare. News of Korean films that were... END_OF_DOCUMENT_TOKEN_TO_BE_REPLACED
While the films released throughout any particular year are indicative of a country's identity, for Korean cinema in 2017 the exploration of political and social issues were especially revealing of the cultural shift that has... END_OF_DOCUMENT_TOKEN_TO_BE_REPLACED

Acclaimed actress Jeon Do-yeon is to be honoured at the 21st Bucheon International Fantastic Film Festival (BiFan) this year, in celebration of her 20 year career that began with Contact back in 1997. Entitled 'Contact, Jeon Do-yeon,' the special program is dedicated to the revered actress and will feature highlights from her incredible filmography, including Secret Sunshine... END_OF_DOCUMENT_TOKEN_TO_BE_REPLACED
Director Kim Jong-Kwan is well-known to fans of independent Korean cinema. A graduate of the Seoul Institute of the Arts, his short film How to Operate a Polaroid... END_OF_DOCUMENT_TOKEN_TO_BE_REPLACED
We are just one week away from the start of the 2nd Korea International Expat Film Festival (KIXFF).  Festival director Kevin Lambert took some time from his busy schedule to answer questions about the festival which... END_OF_DOCUMENT_TOKEN_TO_BE_REPLACED

Having a film selected to premiere at the Cannes Film Festival is an incredible achievement - having two is quite extraordinary. Yet that is precisely what director Hong Sang-soo has done, as The Day After (그 후) and Claire's Camera (클레어의 카메라) are due to be screened, with both films starring actress Kim Min-hee. Selected for the 'In Competition'... END_OF_DOCUMENT_TOKEN_TO_BE_REPLACED
The Villainess (악녀) has received an explosive trailer in the run-up to its debut at the Cannes Film Festival on May 21st. Appearing in the 'Out of Competition - Midnight Projections' program, writer/director Jung Byung-gil's latest... END_OF_DOCUMENT_TOKEN_TO_BE_REPLACED
Director Bong Joon-ho's Okja (옥자) is almost upon us. The highly anticipated science-fiction/drama is set to premiere In Competition at the Cannes Int. Film Festival on May 19th, before appearing on Korean cinema screens around June... END_OF_DOCUMENT_TOKEN_TO_BE_REPLACED