The opportunity to talk in terms of queer theory, ‘camp’, and ‘otherness’ in mainstream Korean cinema is quite rare. While Korean ideology continually changes at an incredible rate, the conservative Confucian ethics still hold immense influence over the attitudes towards the roles of men, women, and sexual relations. Yet cinema is arguably the best medium in which to explore such counter-cultural themes given the creative freedom of expression inherent to the industry, perhaps more so than the structurally rigid television dramas and K-pop. Enter Dasepo Naughty Girls (다세포 소녀).

Based on the highly popular web-comic, Dasepo Naughty Girls explores the lives of the students at Useless High School (or No Use High), a school where sexual promiscuity is encouraged and the curriculum is anything but traditional. Director Lee J-young (이재용) wisely exploits the opportunity to employ original and creative vision to a narrative that includes protagonists of every sexual persuasion and circumstance. The result is incredibly mixed, as the directorial flair is certainly unique and celebratory, yet is aligned with an awfully vapid and directionless narrative that not only forces the LGBT and transvestite characters into figures of ridicule, but also pushes the boundaries of perversity as certain scenarios are clearly middle-aged male fantasies.

The students at No Use High live rather disparate lives. ‘Poor Girl’ (Kim Ok-bin (김옥빈) lives an extremely humble life due to poverty, literally carrying its’ personification on her back. ‘Rich Boy’ Anthony (Park Jin-woo (박진우) has found love, yet is confused as she is a pre-op transgendered person interestingly named ‘Two Eyes’. Her brother, ‘Cyclops’ (Lee Kyeon (이켠), suffers as the loneliest and only virginal member of the school. As the students’ lives are interwoven, each one must face personal trials to overcome before the final day of graduation. Yet their greatest obstacle is posed by the evil and mysterious principle, who has the power to change bold, individualistic female students into brainwashed geeks. The students must work together to defeat the evil menace in order to continue their lifestyles and graduate unscathed.

Stylistically, Dasepo Naughty Girls is an enjoyable treat with a vibrant colour palette and quirky musical offerings. The opening sees a group of K-pop stylized girls in pink dancing through the school, which is not only fun but sets up the offbeat nature of the film well. Similarly the introduction of musical numbers within the film is entertaining and unique as Korean norae-bang (singing room) culture is wonderfully injected to provide comedy.

Yet aside from a few initial titters, Dasepo Naughty Girls is surprisingly very light on comedy as the scenes intended to provide laughs often result in either immature body jokes or are offensive. While it’s wonderful to see LGBT and transvestite characters receiving screen-time that is more celebratory than depressive, they are quickly ridiculed by a narrative that is desperately attempting to be fun and hip while disguising archaic ideological judgement. For example, ‘Rich Boy’ Anthony’s infatuation with transgendered ‘Double Eyes’ begins humorously during a bathroom error, yet a pornographic video reduces her to a mere body prop from which the character never recovers. ‘Poor Girl’s’ servicing of ‘clients’ also begins well, yet upon meeting transvestite ‘Big Razor Sis’ the duo compete for feminine superiority and acceptance through performance that clearly had only one winner from the start. Racism also appears in the form of an absentee English teacher who not only has sexual liaisons with students but has also infected them with an STD. In these and other scenes it is never the denizens of No Use High that pass judgement but rather the narrative that frequently posits such figures in society as shocking ‘deviants’ to be laughed at and from which comedy can be derived.

Yet ironically the most bizarre – and frankly perverse – plot involves the respected figure of the principal. The mystery involves female students who were previously sexually adventurous, but after visiting the principal’s office become studious nerds with little interest in boys. To achieve this, the principal takes a glob of green material (presumably jade) from his mouth and, using his finger, inserts it into the students’ vagina, for which they are thankful and grateful. As prior to such scenes the principal and his methods were barely a blip on the narrative radar, this tangent conveys not only a ‘tacked on’ sensibility but also a middle-aged male fantasy of intimacy with sexually willing high school girls. The resulting battle, which sees students wafting their genital ‘power’ at the source of the disturbance, is a surreal scenario that seemingly attempts to circumvent prior scenes through oddity, and additionally offers precious little closure on the array of narrative threads that lead to such a juncture. 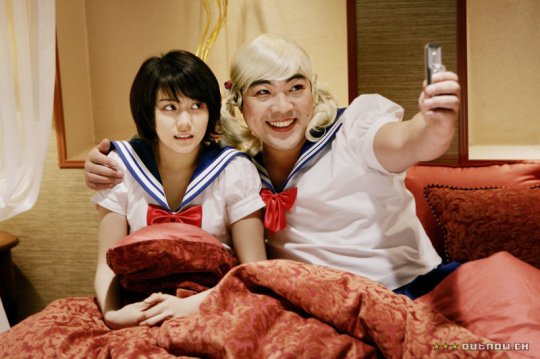 It is particularly difficult to discuss Dasepo Naughty Girls in terms of acting, as the film is intended to be an over-acted and surrealist take on high school life. The extremely limiting screen-time bestowed upon most of the protagonists also hinders proceedings as most characters barely reappear after their initial introduction.

Amongst the handful of characters that recur, it is  ‘Poor Girl’ who appears the most and as such carries Dasepo Naughty Girls on her shoulders. This is actually in the films’ favor as the actress is incredibly talented, managing to find the ambiguous fine line between tongue-in-cheek humour, offbeat comedy, and genuine acting. Kim Ok-bin gives the film much needed focus and grounding as well as a heart and soul, and her presence is sorely missed when other protagonists are followed. Her scenes with ‘Big Razor Sis’ are in stark contrast to the poverty inherent in her private life, yet the actress is convincing in each and every scenario.

Dasepo Naughty Girls is stylized entertainment, one that uses imaginative colour and camera techniques to provide fun and quirky originality within a national cinema that tends to focus on more standardized storytelling. Yet the stylization cannot hide the vacuous nature of the narrative which simultaneously celebrates and derides the protagonists within, and which also fails to merge the various threads into a coherent whole.

For Korean cinema, 2019 was a year that saw the continuation of trends that have been readily apparent for the past several years - an increasing number of big blockbuster/commercially-orientated films with high production values, and the decreasing quality of creative, engaging, and memorable stories. That is not to say the talent has disappeared of... END_OF_DOCUMENT_TOKEN_TO_BE_REPLACED
2018 was quite a bizarre year for Korean cinema. The year began much like any other. The first few months of the year were typically dedicated to family-friendly fare. News of Korean films that were... END_OF_DOCUMENT_TOKEN_TO_BE_REPLACED
While the films released throughout any particular year are indicative of a country's identity, for Korean cinema in 2017 the exploration of political and social issues were especially revealing of the cultural shift that has... END_OF_DOCUMENT_TOKEN_TO_BE_REPLACED

Acclaimed actress Jeon Do-yeon is to be honoured at the 21st Bucheon International Fantastic Film Festival (BiFan) this year, in celebration of her 20 year career that began with Contact back in 1997. Entitled 'Contact, Jeon Do-yeon,' the special program is dedicated to the revered actress and will feature highlights from her incredible filmography, including Secret Sunshine... END_OF_DOCUMENT_TOKEN_TO_BE_REPLACED
Director Kim Jong-Kwan is well-known to fans of independent Korean cinema. A graduate of the Seoul Institute of the Arts, his short film How to Operate a Polaroid... END_OF_DOCUMENT_TOKEN_TO_BE_REPLACED
We are just one week away from the start of the 2nd Korea International Expat Film Festival (KIXFF).  Festival director Kevin Lambert took some time from his busy schedule to answer questions about the festival which... END_OF_DOCUMENT_TOKEN_TO_BE_REPLACED

Having a film selected to premiere at the Cannes Film Festival is an incredible achievement - having two is quite extraordinary. Yet that is precisely what director Hong Sang-soo has done, as The Day After (그 후) and Claire's Camera (클레어의 카메라) are due to be screened, with both films starring actress Kim Min-hee. Selected for the 'In Competition'... END_OF_DOCUMENT_TOKEN_TO_BE_REPLACED
The Villainess (악녀) has received an explosive trailer in the run-up to its debut at the Cannes Film Festival on May 21st. Appearing in the 'Out of Competition - Midnight Projections' program, writer/director Jung Byung-gil's latest... END_OF_DOCUMENT_TOKEN_TO_BE_REPLACED
Director Bong Joon-ho's Okja (옥자) is almost upon us. The highly anticipated science-fiction/drama is set to premiere In Competition at the Cannes Int. Film Festival on May 19th, before appearing on Korean cinema screens around June... END_OF_DOCUMENT_TOKEN_TO_BE_REPLACED