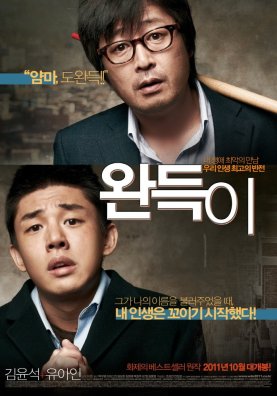 The representation of those outside of ‘mainstream’ culture is often problematic within cinema. While their daily struggles against prejudice and other such conflicts are incredibly compelling, it is easy for protagonists to fall into the ‘pitiable’ category and thus undermine their accomplishments.

Punch (완득이) deftly sidesteps such narrative pitfalls with a wonderfully moving and charming story about those on the fringes of society, one that never patronizes those within and instead focuses on the three-dimensional features and ironies of their lives. In a culture – and national cinema – where physical appearance and financial stability are highly regarded, Punch is a refreshing and comical perspective on oft-ignored contemporary issues.

Wan-deuk (Yoo Ah-in (유아인) lives a troubled existence, failing at school and perpetually involved in fights. His father (Park Soo-young (박수영), a hunchback, is ridiculed for his appearance yet supports them as a dancer and entertainer with mentally ill ‘uncle’ Min-goo (Kim Yeong-jae (김영재). Yet the real bane of Wan-deuk’s life is his teacher Dong-joo (Kim Yoon-seok (김윤석), who takes an active interest in the young man and encourages him to stretch and develop in ways unwanted. But when Wan-deuk’s estranged Filipino mother (Jasmine Lee (이쟈스민) arrives requesting time together, the young man is forced to mature and understand the complexities of those closest to him.

Wan-deuk and his family live a meagre existence

Punch – an odd title considering the original is the lead protagonist’s name – succinctly and organically explores an array of societal issues without foregrounding any one in particular, nor ramming any ideological message into the audience. Instead, Punch eloquently depicts the story of a young man at the head of a makeshift and dysfunctional family, suffering from the idiosyncrasies of life on the poverty line with charismatic sincerity. Kim Dong-woo (김동우) has crafted a wonderfully character-driven script that makes it virtually impossible not to empathize with Wan-deuk and his coming-of-age story, which director Lee Han (이한) competently brings to life.

What makes Punch such an interesting and unique offering are the variety of characters within and the ways in which they strive to turn what mainstream society considers to be weaknesses into strengths. Wan-deuk is an incredibly conflicted young man; as a young boy he idolized his hunchback father for his dancing ability alongside his mentally ill ‘uncle’, tragically ignorant to the reality of the entertainment being provided. Without a mother figure in his life, Wan-deuk, his hero-turned-ridiculed father and his kind ‘uncle’ form a makeshift family, relying on the charity of others to live. Wan-deuk’s inner turmoil is wonderfully conveyed through his apathetic stance towards life, simultaneously a class clown and violently entering in fights even when outnumbered, making him likable and engaging. Wan-deuk’s teacher, Dong-joo, is a highly charismatic character with his own conflicts yet strives to find and encourage the potential within everyone around him, an unsung hero in a deprived community. Yet the characters only truly align with the introduction of Wan-deuk’s estranged mother, shocking him with her Filipino nationality and desire to reconnect. The cultural problem of importing wives from developing Asian countries has been slowly encroaching Korean national cinema for the past few years, yet none are as three-dimensional, nor approach the situation from the perspective of the women themselves, as within Punch. The focus on such disparate characters, and the humanity they exhibit and discover as they come together, is undoubtedly what makes the film is so entertaining and life-affirming. 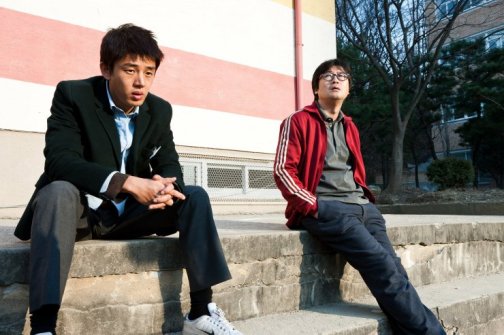 Yoo Ah-in gives a restrained performance as Wan-deuk, making the character likable with his irregular combination of dumb-struck apathy and belligerence. In lesser hands the role could have disintegrated into melodrama or portray his frustrations as disdainful, yet Yoo Ah-in balances the characterization well.

Yet by far the most engaging, comedic, and heart-warming protagonist is that of teacher Dong-joo, played by Kim Yoon-seok. The actor is wonderful in portraying the modest educator, doing so with sincerity, conviction, and with a great sense of comedic timing. His unorthodox style of teaching and encouraging students is humorous as well as unconventional, prompting his students to expand when others have given up. As such, Kim Yoon-seok forges his role into the soul of the film, with each layer of information revealed making him increasingly more charismatic and interesting.

If Dong-joo is the heart of the film then Wan-deuk’s mother, performed by Jasmine Lee, is the heart. Her introduction within the narrative is the catalyst for the disparate characters to bond together, and Jasmine Lee is excellent in conveying the sincerity of a mother wishing to reconnect with the son she abandoned. The actress performs the role with sincerity and integrity, forging sympathy with audiences yet never descends into pity, and her modesty and plight acutely reflects the difficulties faced by imported wives.

Wan-deuk is encouraged to take up kickboxing

Punch is a charming and heart-warming film about those on outside of ‘mainstream’ society and culture, made compelling by the wonderful characterization within. While the film may not push boundaries, the character-driven script features such an array of protagonists, issues and comedic idiosyncrasies that Punch becomes unique in its alternative perspective on a familial drama, and is highly entertaining.

For Korean cinema, 2019 was a year that saw the continuation of trends that have been readily apparent for the past several years - an increasing number of big blockbuster/commercially-orientated films with high production values, and the decreasing quality of creative, engaging, and memorable stories. That is not to say the talent has disappeared of... END_OF_DOCUMENT_TOKEN_TO_BE_REPLACED
2018 was quite a bizarre year for Korean cinema. The year began much like any other. The first few months of the year were typically dedicated to family-friendly fare. News of Korean films that were... END_OF_DOCUMENT_TOKEN_TO_BE_REPLACED
While the films released throughout any particular year are indicative of a country's identity, for Korean cinema in 2017 the exploration of political and social issues were especially revealing of the cultural shift that has... END_OF_DOCUMENT_TOKEN_TO_BE_REPLACED

Acclaimed actress Jeon Do-yeon is to be honoured at the 21st Bucheon International Fantastic Film Festival (BiFan) this year, in celebration of her 20 year career that began with Contact back in 1997. Entitled 'Contact, Jeon Do-yeon,' the special program is dedicated to the revered actress and will feature highlights from her incredible filmography, including Secret Sunshine... END_OF_DOCUMENT_TOKEN_TO_BE_REPLACED
Director Kim Jong-Kwan is well-known to fans of independent Korean cinema. A graduate of the Seoul Institute of the Arts, his short film How to Operate a Polaroid... END_OF_DOCUMENT_TOKEN_TO_BE_REPLACED
We are just one week away from the start of the 2nd Korea International Expat Film Festival (KIXFF).  Festival director Kevin Lambert took some time from his busy schedule to answer questions about the festival which... END_OF_DOCUMENT_TOKEN_TO_BE_REPLACED

Having a film selected to premiere at the Cannes Film Festival is an incredible achievement - having two is quite extraordinary. Yet that is precisely what director Hong Sang-soo has done, as The Day After (그 후) and Claire's Camera (클레어의 카메라) are due to be screened, with both films starring actress Kim Min-hee. Selected for the 'In Competition'... END_OF_DOCUMENT_TOKEN_TO_BE_REPLACED
The Villainess (악녀) has received an explosive trailer in the run-up to its debut at the Cannes Film Festival on May 21st. Appearing in the 'Out of Competition - Midnight Projections' program, writer/director Jung Byung-gil's latest... END_OF_DOCUMENT_TOKEN_TO_BE_REPLACED
Director Bong Joon-ho's Okja (옥자) is almost upon us. The highly anticipated science-fiction/drama is set to premiere In Competition at the Cannes Int. Film Festival on May 19th, before appearing on Korean cinema screens around June... END_OF_DOCUMENT_TOKEN_TO_BE_REPLACED