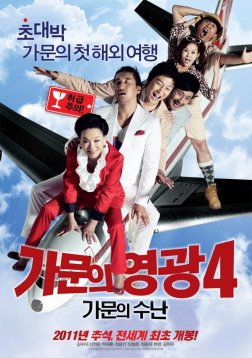 Family vacations are ripe arenas for comedy treatment, with the stress and clash of disparate personalities providing relatable scenarios for audiences. The frantic dash for the airport and abandonment of Kevin in Home Alone (1990), family feuds surfacing in The Great Outdoors (1998), and even bumping into an ex and their new lover in Forgetting Sarah Marshall (2008), are all seemingly part-and-parcel of the vacation experience.

In Marrying the Mafia IV: Family Ordeal (가문의 영광 4: 가문의 수난) – AKA The Unstoppable Family – a family of gangsters-turned-business moguls finally have the embargo on their visas lifted and opt for a trip to neighbouring Japan. What ensues is one of the worst films to emerge in recent memory, an unwatchable, vapid, and offensive piece of celluloid that is a contender for the title of worst sequel in cinematic history.

President Hong (Kim Soo-mi (김수미) is not only the matriarch of the family but also CEO of the highly successful family business – selling kimchi. Yet her empire comes under threat when companies within Japan begin producing their own sweeter version, ‘kimuchi’, reducing President Hong’s profit levels. On discovering the news that the embargo on her visa, obtained during her former days as a gangster, has been lifted she arranges for a family vacation to Fukuoka with her three sons; effeminate Jang In-jae (Shin Hyeon-joon (신현준); casanova Jang Seok-jae (Tak Jae-hoon (탁재훈); and wannabe gangster Jang Kyeong-jae (Lim Hyeong-joon (임형준). Also in tow is buffoonish dog’s body Jong Myeon (Jeong Joon-ha (정준하), helping to carry luggage. Yet upon arrival in Fukuoka the family are caught in a botched bank heist with In-jae’s former girlfriend Hyun-young (Hyeon Yeong (현영), and fearing incarceration due to miscommunication, flee the scene. The family must endeavour to return to Korea, yet without money it will be quite a challenge. 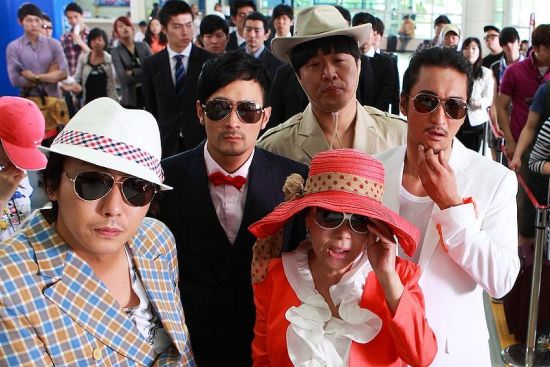 The unstoppable family prepare for their trip to Japan

When the best gag in a comedy film is an unattractive man passing wind, something is incredibly wrong. Yet that’s exactly what occurs within Marrying the Mafia IV: Family Ordeal, where attempts at humour are so acutely lame they barely register. Each protagonist is a ridiculous stereotype, so absurd and unfunny that they are impossible to laugh at. As such Marrying the Mafia IV: Family Ordeal is a highly offensive film in that the screenwriter and actors must surely believe the audience are fools in thinking such crass and banal jokes will actually work. The humour is so woefully juvenile that scenes depicting women drinking foot-cleansing water and a man farting to kill fish are actually intended to inspire laughter.

While stereotypes can often be mined for jokes, each member of the family may as well be the same person as only their costumes reflect the intended caricature. They are all void of personality and have zero redeeming features resulting in the absence of empathy, ultimately forcing their ‘struggle’ to survive in Fukuoka wholly redundant. The set-pieces that make their situation worse are ludicrous at best, as when a mentally ill man who apparently has the ability to speak the languages of the world allows the family to ride his bus – which he by canny coincidence is driving through the countryside at night – later becomes berserk and scares them. Offense is not reserved for the mentally ill however, as the misogyny within is utterly appalling. Aside from elderly matriarch President Hong, only two young female protagonists are present and are constantly sexualised as the camera traverses their legs and bodies. The worst is applied to Hong-young who is forced to dress as a schoolgirl and dance to Kpop, rip her dress to make a mini-skirt which the male protagonists look up at every opportunity, and also adorn the highly-sexualised attire of a man’s shirt with hot pants and high heels. She also sucks the cork out of a wine bottle – twice.

The family are bizarrely trapped on a mountain

The acting is nothing short of horrendous by all involved. While the protagonists are intended to be lacking in intelligence, the over-acting by the cast is intolerable. None of the actors make their character endearing, interesting or entertaining. 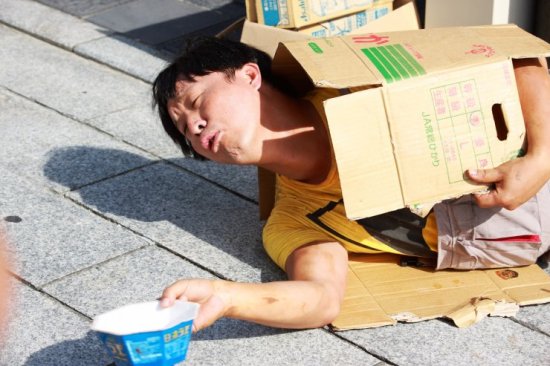 Begging is required to obtain money for noodles

Marrying the Mafia IV: Family Ordeal is without a doubt one of the worst films to emerge from Korea in recent times, a comedy that fails in every degree through the juvenile and absurd sensibilities within. It is offensive in the pursuit of cheap laughs, but the worst offense is ultimately bestowed upon audiences who are presumed to find the film funny. It isn’t. Avoid.

For Korean cinema, 2019 was a year that saw the continuation of trends that have been readily apparent for the past several years - an increasing number of big blockbuster/commercially-orientated films with high production values, and the decreasing quality of creative, engaging, and memorable stories. That is not to say the talent has disappeared of... END_OF_DOCUMENT_TOKEN_TO_BE_REPLACED
2018 was quite a bizarre year for Korean cinema. The year began much like any other. The first few months of the year were typically dedicated to family-friendly fare. News of Korean films that were... END_OF_DOCUMENT_TOKEN_TO_BE_REPLACED
While the films released throughout any particular year are indicative of a country's identity, for Korean cinema in 2017 the exploration of political and social issues were especially revealing of the cultural shift that has... END_OF_DOCUMENT_TOKEN_TO_BE_REPLACED

Acclaimed actress Jeon Do-yeon is to be honoured at the 21st Bucheon International Fantastic Film Festival (BiFan) this year, in celebration of her 20 year career that began with Contact back in 1997. Entitled 'Contact, Jeon Do-yeon,' the special program is dedicated to the revered actress and will feature highlights from her incredible filmography, including Secret Sunshine... END_OF_DOCUMENT_TOKEN_TO_BE_REPLACED
Director Kim Jong-Kwan is well-known to fans of independent Korean cinema. A graduate of the Seoul Institute of the Arts, his short film How to Operate a Polaroid... END_OF_DOCUMENT_TOKEN_TO_BE_REPLACED
We are just one week away from the start of the 2nd Korea International Expat Film Festival (KIXFF).  Festival director Kevin Lambert took some time from his busy schedule to answer questions about the festival which... END_OF_DOCUMENT_TOKEN_TO_BE_REPLACED

Having a film selected to premiere at the Cannes Film Festival is an incredible achievement - having two is quite extraordinary. Yet that is precisely what director Hong Sang-soo has done, as The Day After (그 후) and Claire's Camera (클레어의 카메라) are due to be screened, with both films starring actress Kim Min-hee. Selected for the 'In Competition'... END_OF_DOCUMENT_TOKEN_TO_BE_REPLACED
The Villainess (악녀) has received an explosive trailer in the run-up to its debut at the Cannes Film Festival on May 21st. Appearing in the 'Out of Competition - Midnight Projections' program, writer/director Jung Byung-gil's latest... END_OF_DOCUMENT_TOKEN_TO_BE_REPLACED
Director Bong Joon-ho's Okja (옥자) is almost upon us. The highly anticipated science-fiction/drama is set to premiere In Competition at the Cannes Int. Film Festival on May 19th, before appearing on Korean cinema screens around June... END_OF_DOCUMENT_TOKEN_TO_BE_REPLACED