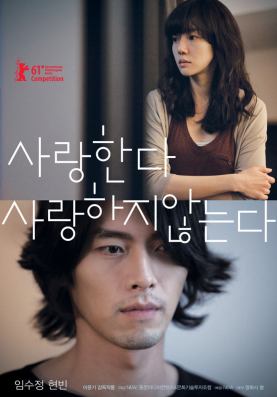 The break-up of a relationship is an oft explored area in television, yet in film the realism of such events tends to be eschewed in favor of either a dramatic arena of affairs and/or substance abuse, or the catalyst for comical shenanigans in an attempt to cope with the loss. The financial motivations behind such decisions are understandable, given that their success is dependent on the detachment from reality and the predictable pleasures they provide. Yet, what of the relationships where the love and passion simply dissipate?

Come Rain Come Shine (사랑한다, 사랑하지 않는다), literally translated as ‘I Love You, I Don’t Love You’, is a mediation on the breakdown of a couple and is a slow, thought-provoking film that poignantly conveys the emotional turmoil they experience during their final day together. The film was (rather unfairly) criticised upon release for the slow paced narrative and the lack of events therein, yet in the attempt to convey realism director Lee Yoon-ki (이윤기) has produced a calm and moderated exploration that deviates from typical audience expectations.

Driving his wife Yeong-shin (Im Soo-jeong (임수정) to Gimpo Airport, Ji-seok (Hyeon Bin (현빈) engages in small talk despite the strangely tense atmosphere between them. After the conversation runs dry, Yeong-shin announces that she is leaving him and will be shortly moving out of their home. Worse still is that she has been seeing another man, a fact she accuses Ji-seok of knowing but ignoring. Bizarrely, Ji-seok appears quiet but unfazed. Days later, Yeong-shin is packing her belongings at home while Ji-seok attempts to make the dissolution of their marriage easier by making coffee, preparing dinner, and helping with the packing. As they awkwardly converse and reminisce over items, Yeong-shin and Ji-seok discover the emotional distress and difficulty in the finality of their marriage.

Yeong-shin announces she will leave Ji-seok

The themes of alienation and loneliness are conveyed by director Lee Yoon-ki (이윤기) with incredible sensitivity and confidence throughout Come Rain Come Shine, as he allows the tense atmosphere created by the mise-en-scene to portray the hardship the couple endure rather than relying on melodrama. This focus on realism is enhanced further by his continual use of long takes which makes the tension between the central protagonists palpable. The opening scene in which Ji-seok drives Yeong-shin to the airport is a long take approximately eight minutes in length, conveying the search for small talk and the awkward silences as features of their relationship which now lacks intimacy and spontaneity. The realism conveyed through the voyeuristic gaze makes for slightly uncomfortable viewing due to their lack of communication and the resulting tension, playing upon the audience’s expectations that a confrontation must occur to disrupt the calm yet strained atmosphere. However as the take is so long, Lee Yoon-ki lulls audience into a false sense of stability which then serves to enhance the shock of Yeong-shin’s announcement she will leave her husband for another man.

Later at the house, Yeong-shin packs her belongings ready to vacate and leave Ji-seok. The house itself is  an incredible element of the mise-en-scene due the various floors that are present, with Lee Yoon-ki utilizing it to convey how the couple are exist on different levels, drift apart, and come together. Each floor, and each room, is unique in portraying the internal conflict within both protagonists, such as Yeong-shin’s isolated higher-tiered office compared with the basement which contains memories over which they reminisce, functioning as the foundation for the house as well as their relationship. The lighting within the house is incredible as the muted tones and lack of colour drain the emotion and passion from the environment, painstakingly exemplifying the numbness within Ji-seok and Yeong-shin. In addition the torrential downpour of rain throughout conveys the sadness both within the protagonists and of the event itself, which ironically forces the couple to communicate and spend more time together as nature seemingly desires the pair try once more – a feature that Lee Yoon-ki respects audiences, whether optimistic or pessimistic, to decide for themselves.

The performances of Im Soo-jeong as Yeong-sin and Hyeon Bin as Ji-seok came under scrutiny upon the release of Come Rain Come Shine which, when taken into consideration that melodrama is enormous popular in Korea, is understandable yet unfair. Both high-profile actors are incredibly talented with a catalogue of successful films and dramas, yet Come Rain Come Shine is a drastic departure from the roles – and expectations – of their previous work. The subtlety contained within their facial expressions and mannerisms conveys the abundance of emotional turmoil contained within. Im Soo-jeong initially projects a cold and heartless persona, yet her desire for passion and love from her highly reserved husband and her reluctance to leave tenderly present themselves as the finality of their situation becomes more apparent. Hyeon Bin is also charismatic in his role as while his quiet and humble nature is continually present, the moments in which he is alone reveal the overwhelming sadness that threatens to engulf him. Despite this he feels incapable of changing the situation yet his chivalry and kindness indicate his desperation to resolve the conflict. 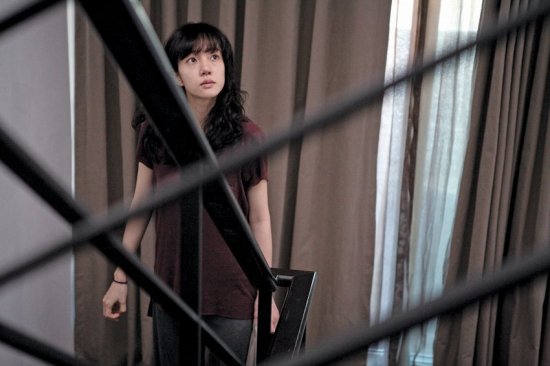 The multiple levels within the house are symbolic of the relationship

Come Rain Come Shine is a tender, thought-provoking, and sensitive portrayal of the final moments in the break-down of a marriage. Due to the slow-paced and meditative filmic style of director Lee Yoon-ki, the film will not satisfy audiences with expectations of melodrama and comedy, or an amalgamation thereof.  However, the realism conveyed through the masterful use of mise-en-scene and long takes, in conjunction with the subtle and highly poignant performances, make Come Rain Come Shine a powerful film about the tenderness of loss.

For Korean cinema, 2019 was a year that saw the continuation of trends that have been readily apparent for the past several years - an increasing number of big blockbuster/commercially-orientated films with high production values, and the decreasing quality of creative, engaging, and memorable stories. That is not to say the talent has disappeared of... END_OF_DOCUMENT_TOKEN_TO_BE_REPLACED
2018 was quite a bizarre year for Korean cinema. The year began much like any other. The first few months of the year were typically dedicated to family-friendly fare. News of Korean films that were... END_OF_DOCUMENT_TOKEN_TO_BE_REPLACED
While the films released throughout any particular year are indicative of a country's identity, for Korean cinema in 2017 the exploration of political and social issues were especially revealing of the cultural shift that has... END_OF_DOCUMENT_TOKEN_TO_BE_REPLACED

Acclaimed actress Jeon Do-yeon is to be honoured at the 21st Bucheon International Fantastic Film Festival (BiFan) this year, in celebration of her 20 year career that began with Contact back in 1997. Entitled 'Contact, Jeon Do-yeon,' the special program is dedicated to the revered actress and will feature highlights from her incredible filmography, including Secret Sunshine... END_OF_DOCUMENT_TOKEN_TO_BE_REPLACED
Director Kim Jong-Kwan is well-known to fans of independent Korean cinema. A graduate of the Seoul Institute of the Arts, his short film How to Operate a Polaroid... END_OF_DOCUMENT_TOKEN_TO_BE_REPLACED
We are just one week away from the start of the 2nd Korea International Expat Film Festival (KIXFF).  Festival director Kevin Lambert took some time from his busy schedule to answer questions about the festival which... END_OF_DOCUMENT_TOKEN_TO_BE_REPLACED

Having a film selected to premiere at the Cannes Film Festival is an incredible achievement - having two is quite extraordinary. Yet that is precisely what director Hong Sang-soo has done, as The Day After (그 후) and Claire's Camera (클레어의 카메라) are due to be screened, with both films starring actress Kim Min-hee. Selected for the 'In Competition'... END_OF_DOCUMENT_TOKEN_TO_BE_REPLACED
The Villainess (악녀) has received an explosive trailer in the run-up to its debut at the Cannes Film Festival on May 21st. Appearing in the 'Out of Competition - Midnight Projections' program, writer/director Jung Byung-gil's latest... END_OF_DOCUMENT_TOKEN_TO_BE_REPLACED
Director Bong Joon-ho's Okja (옥자) is almost upon us. The highly anticipated science-fiction/drama is set to premiere In Competition at the Cannes Int. Film Festival on May 19th, before appearing on Korean cinema screens around June... END_OF_DOCUMENT_TOKEN_TO_BE_REPLACED