It’s a sad trait that in order for one lifestyle to become dominant, the previous one must be demonised. This is acutely the case with religion, as the new philosophy supplants older belief systems by aligning it with barbarism, superstition and the occult in order to acquire more followers. This material is explicitly expressed within horror films, including the incredible The Wicker Man (1973) which demonises paganism, while Poltergeist (1982) conveys the horrors of spiritualism, and even The Exorcist (1973) has its origins in middle eastern practices that must be ‘cured’ by Catholicism.

With Ghastly (기생령) the apparent origin of ‘evil’ is aligned with Korean Shamanism and the practices therein. Yet rather than explore the theology/practices and the tense conflict it creates within the family unit, Ghastly opts for shallow and superficial horror, and is a prime example of how not to construct a horror film featuring lazy filmmaking and a substandard narrative.

Ghastly begins with a gruesome opening scene depicting a married couple cutting off their feet and committing suicide in front of their young son Bin (Lee Hyeong-seok (이형석). With no-one to care for him, Bin’s uncle Jang-hwan (Park Seong-min (박성민) and his wife Sunny (Han Eun-jeong (한은정) are given custody, and move into Bin’s house due to financial difficulty. They are joined by Sunny’s younger sister Yoo-rin (Hyomin (효민), a high schooler who becomes increasingly jealous with the attention bestowed upon Bin. As time passes Sunny finds a Shamanist shrine in the garden shed, and Bin’s behaviour becomes increasingly violent, leading to a showdown to uncover the truth of what happened the fateful night of the Bin’s parent died. 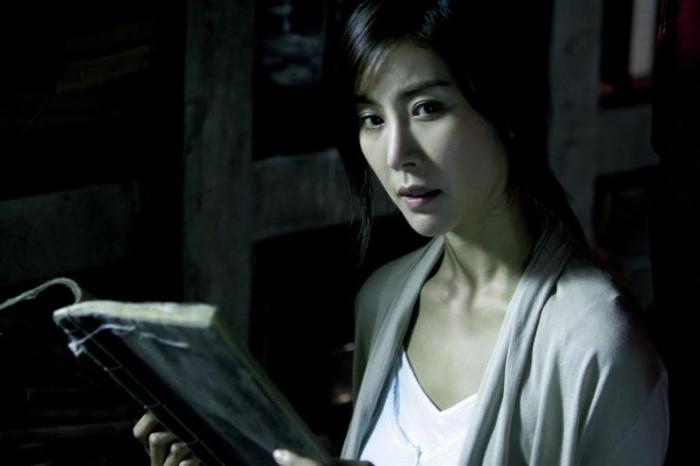 Ghastly opens promisingly enough with a horrific scene of self-mutilation and torture and setting up mystery within the narrative. However the film quickly descends following this, with a by-the-numbers narrative rife with cliches and plot holes by Kim Yoo-ra (김유라), and bland and uninspired direction from Ko Seok-jin (고석진). One of the key elements in any horror film is that the threat of violence/horror must be ‘real’ and impact the protagonist(s) in some manner. Yet aside from the opening and closing scenes, the vast majority of horrific scenes take place within Sunny and Yoo-rin’s minds as nightmares. This completely undermines any tension and suspense generated, although the incorporation of bland generic devices does little to install terror initially anyway. Bin’s grandmother (Baek Soo-ryeon, 백수련) is also portrayed as a source of horror with a truly unenlightened representation, conveying her as a mentally ill and a mindlessly chanting shaman. This extends to the blatant misogyny within the film as only the women are ‘punished’ by receiving nightmares. In regards to Yoo-rin (played by K-pop idol Hyomin), the camera continually fetishises her with tracking shots across her body and the perverse gaze of her step-brother, who later slaps her in the face for verbalizing her displeasure at his glances. Her death is also the most horrific as she is virtually boiled alive (after a shower scene featuring several close-ups on her body) in the bathroom, seemingly ‘punishing’ her merely for being attractive.

Director Ko Seok-jin (고석진) is generally competent in conveying scenes of horror and drama, but does little to create suspense that lead to such confrontations. The use of close-ups on severed limbs, and the manner in which they are removed, is effectively filmed and the best example of horror within the film. Yet the protagonists are less than compelling due to their lack of character development. By far the most interesting is Sunny, who is portrayed as kind, thoughtful and only person who appears interested in solving the mystery of the murders. However there is very little mystery to be solved as it lacks depth and the clues are not sufficient enough to add intrigue. The only real major clue to be uncovered is the shaman shrine, yet the finale is predictable far before this event. The finale unfortunately also succumbs to generic conventions in that once the true source of horror is revealed, a flashback is inaugurated to reveal events prior but does little to enhance the narrative.

Bin is traumatized by the loss of his parents

Aside from the opening scene and scant few additional sequences of horror, Ghastly is an uninspired and generic example of basic horror filmmaking.  The severe lack of character depth, and the absence of any substantial tangible threat due to its confinement within nightmares, vastly reduces the effectiveness of the danger that actually takes place. The level of misogyny is also appalling as the female protagonists are the cause of events, fetishised and beaten. There are far superior Korean horror films available.

For Korean cinema, 2019 was a year that saw the continuation of trends that have been readily apparent for the past several years - an increasing number of big blockbuster/commercially-orientated films with high production values, and the decreasing quality of creative, engaging, and memorable stories. That is not to say the talent has disappeared of... END_OF_DOCUMENT_TOKEN_TO_BE_REPLACED
2018 was quite a bizarre year for Korean cinema. The year began much like any other. The first few months of the year were typically dedicated to family-friendly fare. News of Korean films that were... END_OF_DOCUMENT_TOKEN_TO_BE_REPLACED
While the films released throughout any particular year are indicative of a country's identity, for Korean cinema in 2017 the exploration of political and social issues were especially revealing of the cultural shift that has... END_OF_DOCUMENT_TOKEN_TO_BE_REPLACED

Acclaimed actress Jeon Do-yeon is to be honoured at the 21st Bucheon International Fantastic Film Festival (BiFan) this year, in celebration of her 20 year career that began with Contact back in 1997. Entitled 'Contact, Jeon Do-yeon,' the special program is dedicated to the revered actress and will feature highlights from her incredible filmography, including Secret Sunshine... END_OF_DOCUMENT_TOKEN_TO_BE_REPLACED
Director Kim Jong-Kwan is well-known to fans of independent Korean cinema. A graduate of the Seoul Institute of the Arts, his short film How to Operate a Polaroid... END_OF_DOCUMENT_TOKEN_TO_BE_REPLACED
We are just one week away from the start of the 2nd Korea International Expat Film Festival (KIXFF).  Festival director Kevin Lambert took some time from his busy schedule to answer questions about the festival which... END_OF_DOCUMENT_TOKEN_TO_BE_REPLACED

Having a film selected to premiere at the Cannes Film Festival is an incredible achievement - having two is quite extraordinary. Yet that is precisely what director Hong Sang-soo has done, as The Day After (그 후) and Claire's Camera (클레어의 카메라) are due to be screened, with both films starring actress Kim Min-hee. Selected for the 'In Competition'... END_OF_DOCUMENT_TOKEN_TO_BE_REPLACED
The Villainess (악녀) has received an explosive trailer in the run-up to its debut at the Cannes Film Festival on May 21st. Appearing in the 'Out of Competition - Midnight Projections' program, writer/director Jung Byung-gil's latest... END_OF_DOCUMENT_TOKEN_TO_BE_REPLACED
Director Bong Joon-ho's Okja (옥자) is almost upon us. The highly anticipated science-fiction/drama is set to premiere In Competition at the Cannes Int. Film Festival on May 19th, before appearing on Korean cinema screens around June... END_OF_DOCUMENT_TOKEN_TO_BE_REPLACED