The London Korean Film Festival began today on a rather overcast and wet Thursday in Leceister Square. 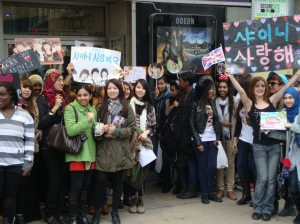 The festivities began with a concert by Kpop sensations SHINee. As you may have heard, the furore surrounding the group resulted in the Odeon website crashing due to demand, and even despite this the tickets were still sold out within an hour. The fans were in high spirits, dancing and singing while they queued for hours. Also noteworthy was that so many people from different cultural backgrounds attended the concert, which is a testament to not only SHINee’s appeal and the influence of the Korean Wave, but London’s multiculturalism as well. 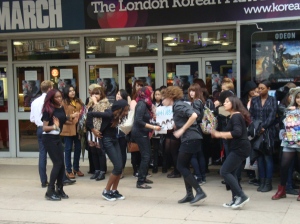 SHINee fans perform for the crowd

After the concert, the opening gala (and European premiere) commenced. But before Arrow, The Ultimate Weapon (최종병기 활) began, SHINee joined the audience (leading to most of the girls being told to remain in their seats), and director Kim Han-min (김한민) humbly introduced his film and stated he would stay after the credits for an audience Q +A. Arrow is an action/adventure film set during the era of the Manchurian invasions of Korea. When the Manchurians attack a village and steal a bride on her wedding day, it’s up to her brother and husband-to-be to track down the soldiers and retrieve her. The film was incredibly well-received by the audience, judging by the laughter/gasps during the film and the thanks given to the director directly after. 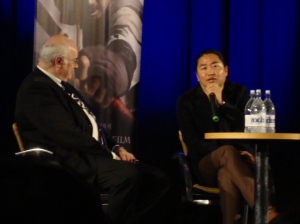 Next was the Q + A session with director Kim Han-min, who was very humble and polite throughout. During the event, the following interesting pieces of news were revealed:

For Korean cinema, 2019 was a year that saw the continuation of trends that have been readily apparent for the past several years - an increasing number of big blockbuster/commercially-orientated films with high production values, and the decreasing quality of creative, engaging, and memorable stories. That is not to say the talent has disappeared of... END_OF_DOCUMENT_TOKEN_TO_BE_REPLACED
2018 was quite a bizarre year for Korean cinema. The year began much like any other. The first few months of the year were typically dedicated to family-friendly fare. News of Korean films that were... END_OF_DOCUMENT_TOKEN_TO_BE_REPLACED
While the films released throughout any particular year are indicative of a country's identity, for Korean cinema in 2017 the exploration of political and social issues were especially revealing of the cultural shift that has... END_OF_DOCUMENT_TOKEN_TO_BE_REPLACED

Acclaimed actress Jeon Do-yeon is to be honoured at the 21st Bucheon International Fantastic Film Festival (BiFan) this year, in celebration of her 20 year career that began with Contact back in 1997. Entitled 'Contact, Jeon Do-yeon,' the special program is dedicated to the revered actress and will feature highlights from her incredible filmography, including Secret Sunshine... END_OF_DOCUMENT_TOKEN_TO_BE_REPLACED
Director Kim Jong-Kwan is well-known to fans of independent Korean cinema. A graduate of the Seoul Institute of the Arts, his short film How to Operate a Polaroid... END_OF_DOCUMENT_TOKEN_TO_BE_REPLACED
We are just one week away from the start of the 2nd Korea International Expat Film Festival (KIXFF).  Festival director Kevin Lambert took some time from his busy schedule to answer questions about the festival which... END_OF_DOCUMENT_TOKEN_TO_BE_REPLACED

Having a film selected to premiere at the Cannes Film Festival is an incredible achievement - having two is quite extraordinary. Yet that is precisely what director Hong Sang-soo has done, as The Day After (그 후) and Claire's Camera (클레어의 카메라) are due to be screened, with both films starring actress Kim Min-hee. Selected for the 'In Competition'... END_OF_DOCUMENT_TOKEN_TO_BE_REPLACED
The Villainess (악녀) has received an explosive trailer in the run-up to its debut at the Cannes Film Festival on May 21st. Appearing in the 'Out of Competition - Midnight Projections' program, writer/director Jung Byung-gil's latest... END_OF_DOCUMENT_TOKEN_TO_BE_REPLACED
Director Bong Joon-ho's Okja (옥자) is almost upon us. The highly anticipated science-fiction/drama is set to premiere In Competition at the Cannes Int. Film Festival on May 19th, before appearing on Korean cinema screens around June... END_OF_DOCUMENT_TOKEN_TO_BE_REPLACED