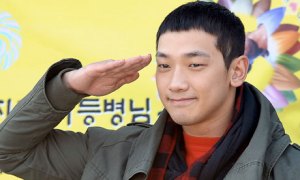 All Korean men have mandatory military service for two years, and while celebrities reporting for duty is nothing new, the level of coverage surrounding Rain’s departure has been unprecedented. News outlets from various countries have reported the event, including The Korean Times, the BBC, the Guardian, CBS, TIME, the China Daily, and more.

The Guardian’s Justin McCurry even went as far as to compare Rain to Elvis, stating:

‘More than half a century after the US military draft put Elvis Presley’s career on hold, his modern-day South Korean counterpart bade farewell to tearful fans this week as he prepared for two years’ national service.’

McCurry certainly has a point. At only 29 years of age, Rain’s career has been impressive and diverse. Primarily known for his

dancing and later his music, Rain has also starred in several Korean TV Dramas including Fugitive: Plan B (도망자 Plan B). He additionally broke into film through his role in the Korean film ‘I’m a Cyborg But That’s OK‘ (싸이보그지만 괜찮아, 2006), and even featured in Hollywood fare in ‘Speed Racer‘ (2008), and as main character Rizo in ‘Ninja Assassin‘ (2009). Rain’s popularity and wealth has also allowed him to create his own entertainment company entitled J Tune Entertainment, and has taken the top spot of TIME’s 100 most influential people poll for 3 years running.

With so many achievements, it will interesting to see how Rain’s military service will impact his career.

For Korean cinema, 2019 was a year that saw the continuation of trends that have been readily apparent for the past several years - an increasing number of big blockbuster/commercially-orientated films with high production values, and the decreasing quality of creative, engaging, and memorable stories. That is not to say the talent has disappeared of... END_OF_DOCUMENT_TOKEN_TO_BE_REPLACED
2018 was quite a bizarre year for Korean cinema. The year began much like any other. The first few months of the year were typically dedicated to family-friendly fare. News of Korean films that were... END_OF_DOCUMENT_TOKEN_TO_BE_REPLACED
While the films released throughout any particular year are indicative of a country's identity, for Korean cinema in 2017 the exploration of political and social issues were especially revealing of the cultural shift that has... END_OF_DOCUMENT_TOKEN_TO_BE_REPLACED

Acclaimed actress Jeon Do-yeon is to be honoured at the 21st Bucheon International Fantastic Film Festival (BiFan) this year, in celebration of her 20 year career that began with Contact back in 1997. Entitled 'Contact, Jeon Do-yeon,' the special program is dedicated to the revered actress and will feature highlights from her incredible filmography, including Secret Sunshine... END_OF_DOCUMENT_TOKEN_TO_BE_REPLACED
Director Kim Jong-Kwan is well-known to fans of independent Korean cinema. A graduate of the Seoul Institute of the Arts, his short film How to Operate a Polaroid... END_OF_DOCUMENT_TOKEN_TO_BE_REPLACED
We are just one week away from the start of the 2nd Korea International Expat Film Festival (KIXFF).  Festival director Kevin Lambert took some time from his busy schedule to answer questions about the festival which... END_OF_DOCUMENT_TOKEN_TO_BE_REPLACED

Having a film selected to premiere at the Cannes Film Festival is an incredible achievement - having two is quite extraordinary. Yet that is precisely what director Hong Sang-soo has done, as The Day After (그 후) and Claire's Camera (클레어의 카메라) are due to be screened, with both films starring actress Kim Min-hee. Selected for the 'In Competition'... END_OF_DOCUMENT_TOKEN_TO_BE_REPLACED
The Villainess (악녀) has received an explosive trailer in the run-up to its debut at the Cannes Film Festival on May 21st. Appearing in the 'Out of Competition - Midnight Projections' program, writer/director Jung Byung-gil's latest... END_OF_DOCUMENT_TOKEN_TO_BE_REPLACED
Director Bong Joon-ho's Okja (옥자) is almost upon us. The highly anticipated science-fiction/drama is set to premiere In Competition at the Cannes Int. Film Festival on May 19th, before appearing on Korean cinema screens around June... END_OF_DOCUMENT_TOKEN_TO_BE_REPLACED