Director Kim Jong-Kwan is well-known to fans of independent Korean cinema. A graduate of the Seoul Institute of the Arts, his short film How to Operate a Polaroid Camera is considered a classic Korean short film. Last year he had not one but two features premiere at the two biggest film festivals in Korea, respectively – Worst Woman at the Jeonju International Film Festival in the competition section, while The Table was part of the Busan International Film Festival’s panorama of contemporary Korean cinema. One of the rising stars of Korean film – actress Han Ye-ri (Haemoo, Kundo: Age of the Rampant) – is in both, while beside her in The Table appears another popular actress – Jung Yu-Mi (Train to Busan, The Himalayas).

Since both movies were among my favorites in 2016, I was more than happy when director Kim found some time in his busy schedule to answer my questions. And since most of his movies are told through the eyes of women, it was only logical for my first question to be about his choice of main characters.

Why the main characters in your movies are usually women?

I find it easier to write about a main female character. Maybe there is some feminine side in me – or so I have been told by people. My writing also reflects my literary taste: I seem to have read mainly novels either with women as protagonists or written by female authors. So I think that’s one of the reasons why creating female protagonists has become easier to me. Apart from that I think that the way I see the world and how I write about the relationships between people or the things that upset me in our society can be relayed better through the eyes of a woman.

After working together on a short film and the feature Worst Woman, actress Han Ye-Ri appears also in the director’s last film The Table.

So would you say that you know the heart of a woman?

I am not sure about that… Definitely there are things I don’t know about women. After all I am a man. But I think there is something appealing in writing from the female point of view. Women have both weak and strong sides in themselves. And I find that it is interesting to write about the situations when those two sides collide. Besides, in our society women are in a weaker position than men. So I seem to be more interested in writing about their struggles.

Ever since your first movie you have been making films about the relationships between men and women. What is the reason for that?

I like melodrama as a genre. Besides, I remember when I first had to shoot short films back in film school, I had to come up with stories that could be done on a really low budget. So writing scripts with 2 or 3 characters and concentrating on what is going on inside the relationship between a man and a woman was more comfortable.

Do you want to continue making melodramas?

Not necessarily. I would like to continue talking about the irony in relationships between people and about love. But I also want to explore in general what makes people sad, afraid, lonely… and that can be done through different genres. I’m interested, for example, in making a criminal drama. 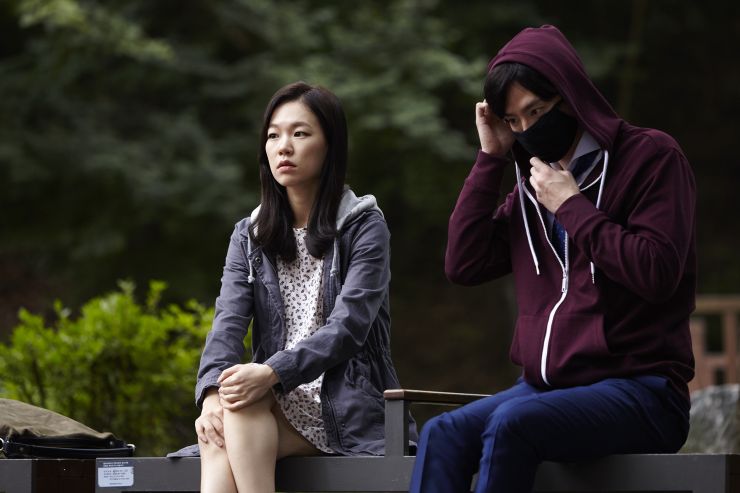 In Worst Woman, relationship strife is the source of both comedy and drama.

When you go to the cinema to watch a movie, what kind of film do you usually watch?

Depends on my mood. Sometimes when I want to get rid of stress, I would watch something that is easy to take in, that doesn’t make me think too much. But when I am about to start a new project, I look for movies that can inspire and motivate me.

There are film people who completely reject the idea of watching blockbuster movies. They don’t regard them as “art” or as “cinema.”

Movies are both art and industry. Blockbuster movies are the ones that most people enjoy and have stronger commercial value. So it is only natural to make them. It’s impossible not to have them. But! If there were to be only such movies, it would be kind of “too lonely.” There must be movies that explore other themes. But also, it is not possible only to have independent art films. It is hard to make them profitable.

Is there communication or cooperation between Korean independent and commercial filmmakers?

There are people who start by making independent movies and then go into big, commercial projects as well as the other way around.

We have big budget movies with high artistic values such as The Handmaiden by director Park Chan-Wook, and we have low budget independent movies like Dongju: Portrait of a Poet by director Lee Joon-Ik (who also made blockbuster The Throne) that became a commercial success.

Of course there are people who identify themselves as only independent film directors. But most filmmakers, including me, don’t carry with themselves the identity of “an indie film director.” When starting a new project, we write about a subject that is important to us. That “thing” can turn into both a blockbuster or an art-house film.

Actress Jung Yoo-Mi in a scene from the movie The Table.

You have worked on several occasions with the same actresses – Han Ye-Ri and Jung Yoo-Mi. Why is that?

I also like working with new actors and crew. On one hand if I work with the same people, I could go deeper in terms of film, but on the other hand my colors could blend into only one. Working with different people allows me to broaden up my spectrum, but working with the same ones allows us to get used to each other and there is some feeling of security in that.

But even if I cast actors I have worked with before I say to them not to act in the same way as before. For my part, I also try to cast them in films in which they can show a different side of themselves.

For example the first time I worked with Jung Yoo-Mi was in the 2004 short film How to Operate a Polaroid Camera. The next time we worked together was in the 2010 film Come. Closer. The character I entrusted her the 2nd time was so different from her 20 something personality – much more melancholic. Then in my last film The Table I showed her as quite a strong woman who faces her first love. I really like trying out things like that.

The first time I worked with Han Ye-Ri was also for a short film. Then we made Worst Woman together where she plays a woman who carries a kind of self-irony in herself but is also quite cool. In The Table the feeling is a bit different. There is irony in her part there too, but her character is more of a person who doesn’t feel guilt when lying.

When you are working with your actors, is it easier to give directions and communicate with female or male actors?

When working together, both sides – actors and directors – have to kind of match their style. But it’s not a matter of gender whether and how this will work out. It just depends on the person’s specificities, character. For me the most important thing is to have real conversations, to exchange views and ideas with my actors.

Worst Woman ironically tells the story of a woman that is not ‘the worst’.

Finally, ever since I watched Worst Woman, I wanted to ask you why you chose that title since the Korean one is Worst Day?

When we presented Worst Woman at the Jeonju International Film Festival last year, I thought such a title, both in English and Korean, had some charm in itself. To the male characters in the film she might seem as the worst woman, but ironically I wanted to tell the story of a woman that is not ‘the worst.’ So while watching the movie, people would have the title in their mind and would constantly ask themselves “Why is she ‘the worst woman’?” But our marketing team thought that the audience might feel uncomfortable with that title since it carries some prejudice in itself. So in Korean we changed it to Worst Day. As for the English one, on one hand there were films with such title and also most of the people working on the film thought it just sounds better, so we left it like that.

Our sincere thanks to director Kim Jong-kwan for taking the time to answer our questions.

Huge thanks also to our good friend Song Tae-Eun for helping with the transcription of the interview in Korean.

For Korean cinema, 2019 was a year that saw the continuation of trends that have been readily apparent for the past several years - an increasing number of big blockbuster/commercially-orientated films with high production values, and the decreasing quality of creative, engaging, and memorable stories. That is not to say the talent has disappeared of... END_OF_DOCUMENT_TOKEN_TO_BE_REPLACED
2018 was quite a bizarre year for Korean cinema. The year began much like any other. The first few months of the year were typically dedicated to family-friendly fare. News of Korean films that were... END_OF_DOCUMENT_TOKEN_TO_BE_REPLACED
While the films released throughout any particular year are indicative of a country's identity, for Korean cinema in 2017 the exploration of political and social issues were especially revealing of the cultural shift that has... END_OF_DOCUMENT_TOKEN_TO_BE_REPLACED

Acclaimed actress Jeon Do-yeon is to be honoured at the 21st Bucheon International Fantastic Film Festival (BiFan) this year, in celebration of her 20 year career that began with Contact back in 1997. Entitled 'Contact, Jeon Do-yeon,' the special program is dedicated to the revered actress and will feature highlights from her incredible filmography, including Secret Sunshine... END_OF_DOCUMENT_TOKEN_TO_BE_REPLACED
Director Kim Jong-Kwan is well-known to fans of independent Korean cinema. A graduate of the Seoul Institute of the Arts, his short film How to Operate a Polaroid... END_OF_DOCUMENT_TOKEN_TO_BE_REPLACED
We are just one week away from the start of the 2nd Korea International Expat Film Festival (KIXFF).  Festival director Kevin Lambert took some time from his busy schedule to answer questions about the festival which... END_OF_DOCUMENT_TOKEN_TO_BE_REPLACED

Having a film selected to premiere at the Cannes Film Festival is an incredible achievement - having two is quite extraordinary. Yet that is precisely what director Hong Sang-soo has done, as The Day After (그 후) and Claire's Camera (클레어의 카메라) are due to be screened, with both films starring actress Kim Min-hee. Selected for the 'In Competition'... END_OF_DOCUMENT_TOKEN_TO_BE_REPLACED
The Villainess (악녀) has received an explosive trailer in the run-up to its debut at the Cannes Film Festival on May 21st. Appearing in the 'Out of Competition - Midnight Projections' program, writer/director Jung Byung-gil's latest... END_OF_DOCUMENT_TOKEN_TO_BE_REPLACED
Director Bong Joon-ho's Okja (옥자) is almost upon us. The highly anticipated science-fiction/drama is set to premiere In Competition at the Cannes Int. Film Festival on May 19th, before appearing on Korean cinema screens around June... END_OF_DOCUMENT_TOKEN_TO_BE_REPLACED
Join 143 other subscribers
Loading Comments...