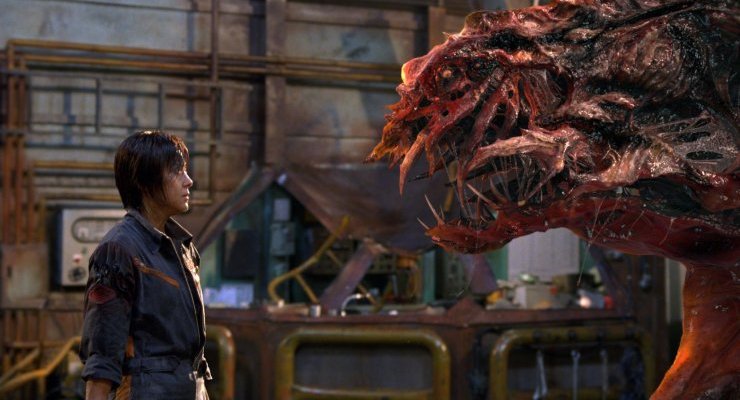 When Sector 7 (7광구) was announced, it came with a wave of anticipation. It had a blockbuster story that resembled Hollywood fare, guaranteeing a foreign market; it had assembled some of the most popular actors in the country, including hot property Ha Ji-won (하지원) also known as ‘the Korean Angelina Jolie’; and it was to be filmed in 3D, insinuating the high level of confidence film executives had in the project.

The story, about workers on an oil rig that come face to face with a monster, had more than a few similarities with Ridley Scott’s classic Alien (1979) and had cinephiles wondering if it could compete in Hollywood and reignite international attention in Korean cinema. To be fair, the expectations were so ridiculously high that any film would have fallen short. But no-one was prepared for just how far short, and how awful, Sector 7 truly is.

On an isolated oil rig off the coast of Jeju Island, the crew are experiencing difficulties as there is no oil to be found. The supervisor (Park Jeong-hak (박정학), wants to abandon the search but is repeatedly challenged by team member Cha Hae-joon (Ha Ji-won (하지원) for his cowardice. That is, until senior official Jeong-man (Ahn Seong-gi (안성기) returns to the rig and demands the search continues until an oil well is found; yet once their objective has been achieved, members of the crew are found dead. As the crew attempt to find the murderer, the come face-to-face with a monster from the depths of the ocean.

The narrative itself is not an inherently bad premise, yet director Kim Ji-hoon (김지훈) continually pushes audiences’ suspension of disbelief well beyond their limits. For example, motorcycle drag racing on an oil rig appears to be a commonplace activity on this particular rig, as does the bizarre mixture of futuristic and archaic technology within it. The absurdity is not helped by the use of terrible CGI and green screen that seriously detracts an sense of logic to the proceedings. The worst is saved for the monster itself, an unbelievably poor creation that appears like a reject from a Final Fantasy video game. The monster has supposedly been forcefully evolved from a smaller creature yet bares no resemblance to it whatsoever, and exhibits an entirely different set of abilities. Luckily most scenes involving the creature are at night and in shadows, yet even then the lackluster design, movement, skin texture and so on are obviously apparent. This is all the more baffling when considering Bong Joon-ho‘s incredible monster film The Host was made 5 years earlier.

The crew must fight to survive the new menace

The actors portraying the tyrannized protagonists are also unimpressive, although they cannot be held fully accountable as the dialogue is woeful. Ha Ji-won is usually an actress that guarantees quality, yet even she provides an under-par performance as she schizophrenically flits from cute airhead to hardened independent woman. Her love interest played by Oh Ji-ho (as Kim Dong-soo (김동수) is so under-represented that he hardly warrants being in the film, let alone providing adequate interest as the source of her affections. Duo Park Cheol-min (박철민) and Song Sae-byeok (송새벽) are intended to add comedy to the mix however become so irritating that it’s something of a relief when they meet their demise. Park Cheol-min in particular shouts his way through his dialogue, while his compatriot merely whines. The less said about Park Yeong-soo’s (박영수) mentally ill crew member Jang Chi-soon the better. Only Ahn Seong-gi as senior crew member Jeong-man conveys credibility through his quiet-albeit-authoritative tones, yet he too succumbs to the oddities in the narrative when his supposedly true nature is revealed.

Cha Hae-joon faces off against the monster

Sector 7 is not a complete disaster, as director Kim Ji-hoon competently composes scenes and keeps the action moving at a swift pace. Apart from the awful CGI it’s clear that Sector 7 has a large budget which has been well spent on creating the mise-en-scene of an oil rig. It’s a shame that so many negative features outweigh the few scant positives, rendering a potential blockbuster into a substandard film well below the talents of all involved.

For Korean cinema, 2019 was a year that saw the continuation of trends that have been readily apparent for the past several years - an increasing number of big blockbuster/commercially-orientated films with high production values, and the decreasing quality of creative, engaging, and memorable stories. That is not to say the talent has disappeared of... END_OF_DOCUMENT_TOKEN_TO_BE_REPLACED
2018 was quite a bizarre year for Korean cinema. The year began much like any other. The first few months of the year were typically dedicated to family-friendly fare. News of Korean films that were... END_OF_DOCUMENT_TOKEN_TO_BE_REPLACED
While the films released throughout any particular year are indicative of a country's identity, for Korean cinema in 2017 the exploration of political and social issues were especially revealing of the cultural shift that has... END_OF_DOCUMENT_TOKEN_TO_BE_REPLACED

Acclaimed actress Jeon Do-yeon is to be honoured at the 21st Bucheon International Fantastic Film Festival (BiFan) this year, in celebration of her 20 year career that began with Contact back in 1997. Entitled 'Contact, Jeon Do-yeon,' the special program is dedicated to the revered actress and will feature highlights from her incredible filmography, including Secret Sunshine... END_OF_DOCUMENT_TOKEN_TO_BE_REPLACED
Director Kim Jong-Kwan is well-known to fans of independent Korean cinema. A graduate of the Seoul Institute of the Arts, his short film How to Operate a Polaroid... END_OF_DOCUMENT_TOKEN_TO_BE_REPLACED
We are just one week away from the start of the 2nd Korea International Expat Film Festival (KIXFF).  Festival director Kevin Lambert took some time from his busy schedule to answer questions about the festival which... END_OF_DOCUMENT_TOKEN_TO_BE_REPLACED

Having a film selected to premiere at the Cannes Film Festival is an incredible achievement - having two is quite extraordinary. Yet that is precisely what director Hong Sang-soo has done, as The Day After (그 후) and Claire's Camera (클레어의 카메라) are due to be screened, with both films starring actress Kim Min-hee. Selected for the 'In Competition'... END_OF_DOCUMENT_TOKEN_TO_BE_REPLACED
The Villainess (악녀) has received an explosive trailer in the run-up to its debut at the Cannes Film Festival on May 21st. Appearing in the 'Out of Competition - Midnight Projections' program, writer/director Jung Byung-gil's latest... END_OF_DOCUMENT_TOKEN_TO_BE_REPLACED
Director Bong Joon-ho's Okja (옥자) is almost upon us. The highly anticipated science-fiction/drama is set to premiere In Competition at the Cannes Int. Film Festival on May 19th, before appearing on Korean cinema screens around June... END_OF_DOCUMENT_TOKEN_TO_BE_REPLACED
Loading Comments...
Comment
×