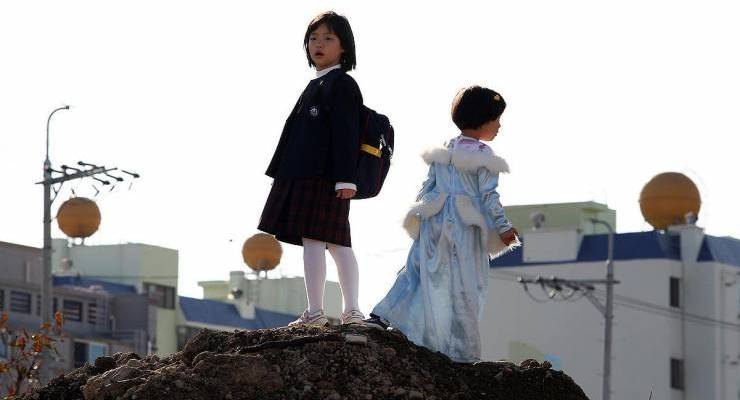 The notion of family is incredibly important within all cultures, yet while ‘Western’ countries have dealt with the breakdown of the family unit for several generations it is only in the last decade that Korea has seen an enormous rise in the national divorce rate. Due to the highly competitive culture and emphasis on diligence and financial earnings, such divorces often result in the ignorance, or outright abandonment, of the children and their needs as parents strive in the workplace or seek pastures new.

Treeless Mountain (나무없는 산), the second feature written and directed by Kim So-yong (김소영), explores the lives of two such children with elegance, grace, and poignancy. The simplistic narrative allows the director to convey every emotional nuance from the young actresses, resulting in an outstandingly heartfelt drama of loss and the desire for kindness, the effects of which stay long after the closing credits.

At seven years old, Jin (Kim Hee-yeon (김희연) is developing well at school and is beginning to display keen intelligence. Yet when school is finished, she must rush home to take care of her younger sister Bin (Kim Seong-hee (김성희) until their mother (Lee Soo-ah (이수아) returns from work. Struggling financially, their mother decides to leave Jin and Bin with their aunt (Kim Mi-hyang (김미향) while she looks for their father, promising to return when their piggy bank is full. Distraught, Jin and Bin set out to earn enough money to fill their piggy bank, and await the return of their family unit. 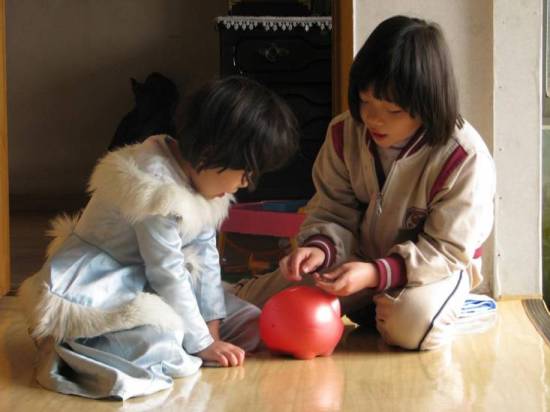 Jin and Bin work hard to fill their piggy bank

Writer/director Kim So-yong does a masterful job in conveying the unkind world inhabited by youngsters Jin and Bin. Jin in particular receives the most focus and is the heart of the film, old enough to understand that changes are occurring within her life yet too young to comprehend why. Jin’s intelligence in school, as well as her lack of self-confidence, are wonderfully conveyed only to be later poignantly contrasted with her parental role as caretaker of her younger sister Bin. Her resentment of the role is amazingly restrained, while her heartache as Bin receives more attention and affection from their mother is heartbreakingly sincere. Such subtle emotional responses are expertly captured by Kim So-yong, with her highly effective and consistent use of close-ups and extreme close-ups making for a simultaneously riveting and a borderline claustrophobic experience, forcing the audience to engage and empathize with the young girls. While Jin almost instinctively takes on the role of responsibility, Bin is excellent in attempting to ignore the sense of abandonment and pretend everything is fine, as exemplified by her princess dress which she constantly wears. She is delightfully optimistic and treats her mother’s abandonment as a quest or game, the completion of which involves filling a piggy bank full of coins by any means necessary. Jin and Bin’s childhood logic in fulfilling the task set by their mother is comical, endearing and tragic, making their plight ever more compelling.

As well as depicting the story of the two young girls, Treeless Mountain is a scathing account of the contemporary absence of parental responsibility. Jin and Bin’s father never appears within the film, and while their mother is caring she also treats Jin unfairly, as well as failing to return to her children as promised. While the situation is never made clear, the mother’s quest of finding the father of her children is her ultimate goal and decides to stay with him – the man who abandoned his family – rather than return to their children. Similarly, the aunt who takes responsibility for Jin and Bin during this time is woefully inept, using money to drink alcohol rather than on food for the hungry youngsters. It is only the mother of a disabled child and Jin and Bin’s grandmother who are portrayed as understanding the nature of parenting, clearly stating that parental responsibility is a specialist comprehension that is shockingly absent in contemporary society.

The girls await their mother atop the ‘treeless mountain’

Kim Hee-yeon is absolutely enthralling as Jin, giving an astonishing performance for such a young actress. She completely shines in every scene and conveys a startling array of emotional depth throughout the film. Her intelligence, shyness, and her desire to play and live the life of a child are wonderfully performed, yet the young actress really excels during more dramatic events that reveal her animosity and resentment towards her situation, lashing out at younger sister Bin in moments of frustration and later subtly expressing guilt through kindness. Throughout Treeless Mountain, Kim Hee-yeon performs with utmost sincerity.

As younger sister Bin, Kim Seong-hee is also wonderfully endearing. Her childish optimism and logic are a joy to watch, as is her boldness which helps her and her reluctant older sister during times of hardship. Her innocence and naivety are excellent counterparts to Jin’s growing awareness and cynicism, and the co-dependency they share in their relationship is elegantly symbiotic.

Writer/director Kim So-yong has crafted a beautifully poetic tale of the hardships of childhood in Treeless Mountain, with incredibly endearing performances by the two young leads that are conveyed with a startling level of sincerity. The film is one of the few to tackle the concept of the breakdown of the family unit from the perspective of the children, lambasting parents who renege on their responsibilities yet emphasizing the resilience and adaptability of the youngsters. Treeless Mountain is an elegantly poignant film about the desire for kindness in a cynical world, and is an absolute delight.

For Korean cinema, 2019 was a year that saw the continuation of trends that have been readily apparent for the past several years - an increasing number of big blockbuster/commercially-orientated films with high production values, and the decreasing quality of creative, engaging, and memorable stories. That is not to say the talent has disappeared of... END_OF_DOCUMENT_TOKEN_TO_BE_REPLACED
2018 was quite a bizarre year for Korean cinema. The year began much like any other. The first few months of the year were typically dedicated to family-friendly fare. News of Korean films that were... END_OF_DOCUMENT_TOKEN_TO_BE_REPLACED
While the films released throughout any particular year are indicative of a country's identity, for Korean cinema in 2017 the exploration of political and social issues were especially revealing of the cultural shift that has... END_OF_DOCUMENT_TOKEN_TO_BE_REPLACED

Acclaimed actress Jeon Do-yeon is to be honoured at the 21st Bucheon International Fantastic Film Festival (BiFan) this year, in celebration of her 20 year career that began with Contact back in 1997. Entitled 'Contact, Jeon Do-yeon,' the special program is dedicated to the revered actress and will feature highlights from her incredible filmography, including Secret Sunshine... END_OF_DOCUMENT_TOKEN_TO_BE_REPLACED
Director Kim Jong-Kwan is well-known to fans of independent Korean cinema. A graduate of the Seoul Institute of the Arts, his short film How to Operate a Polaroid... END_OF_DOCUMENT_TOKEN_TO_BE_REPLACED
We are just one week away from the start of the 2nd Korea International Expat Film Festival (KIXFF).  Festival director Kevin Lambert took some time from his busy schedule to answer questions about the festival which... END_OF_DOCUMENT_TOKEN_TO_BE_REPLACED

Having a film selected to premiere at the Cannes Film Festival is an incredible achievement - having two is quite extraordinary. Yet that is precisely what director Hong Sang-soo has done, as The Day After (그 후) and Claire's Camera (클레어의 카메라) are due to be screened, with both films starring actress Kim Min-hee. Selected for the 'In Competition'... END_OF_DOCUMENT_TOKEN_TO_BE_REPLACED
The Villainess (악녀) has received an explosive trailer in the run-up to its debut at the Cannes Film Festival on May 21st. Appearing in the 'Out of Competition - Midnight Projections' program, writer/director Jung Byung-gil's latest... END_OF_DOCUMENT_TOKEN_TO_BE_REPLACED
Director Bong Joon-ho's Okja (옥자) is almost upon us. The highly anticipated science-fiction/drama is set to premiere In Competition at the Cannes Int. Film Festival on May 19th, before appearing on Korean cinema screens around June... END_OF_DOCUMENT_TOKEN_TO_BE_REPLACED
Join 143 other followers
Loading Comments...