When Saving Private Ryan (1998) was released, the style in which war battle scenes were filmed was forever changed. The intensity that accompanied the hand-held, debris-hitting-the-camera, point-of-view shot served to (almost) place audiences within the action and offered a more thrilling, and more compelling, viewing experience. This ‘raw’ method of filming battle sequences is arguably why the film received such universal praise, and why so many war films since have attempted to emulate the formula.

Brotherhood [Taegukgi] (태극기 휘날리며) employs the same techniques in depicting the Korean War, yet the structure is markedly different and all the better for it. While Spielberg unloaded the horrors of war in the opening 20 minutes (consequently resulting in the rest of the film to be rather dull by comparison), director Kang Je-gyu (강제규) wisely uses the style sparingly at first before building to a brutal finale.

Brotherhood tells the story of two brothers, Jin Tae (Jang Dong Gun, 장동건) and Jin Seok (Won Bin, 원빈) who live a modest existence in central Seoul, 1950. Jin Tae, the eldest brother, is a street-smart shoe-shiner with ambitions to open his own shoe store. His younger 18 year old brother Jin Seok is a dedicated student, who carries the burden of the hopes of all the family. Jin Tae is soon to be married to Young Shin (Lee Eun Joo, 이은주), who co-owns a noodle restaurant with her future mother-in-law. The lifestyle of the makeshift family is humble but happy, and the cinematography is incredibly detailed in reinforcing the differences between the rich and poor, the city and country. When war inevitably breaks out, Jin Tae leads the family to the midland city of Daegu in an attempt to avoid the battle.

An incredible battle sequence in Brotherhood

Traditionally, war films present an ‘us vs. them’ framework in order to inspire patriotism and align the viewer with the central protagonist(s). Brotherhood refrains from such a simplistic dichotomy, as when the family reaches Daegu, Jin Tae and Jin Seok are forced into drafting for the military; when Jin Tae protests that his sibling has a heart condition, he is beaten for defiance. On the frontline, the enemy is berated by the South Korean soldiers for being ‘Communist’, but the definition, and the ideology, is lost beneath the torrent of inhumane behaviour by both sides. When the northern forces murder villagers, the south brutally dispatches them with flamethrowers; while the southern forces execute everyone who had signed up for Communist rallies, the north hangs women outside cities as a warning. The ‘enemy’ becomes interchangeable to the point where the enemy doesn’t exist, only who wronged who last, and how gravely. 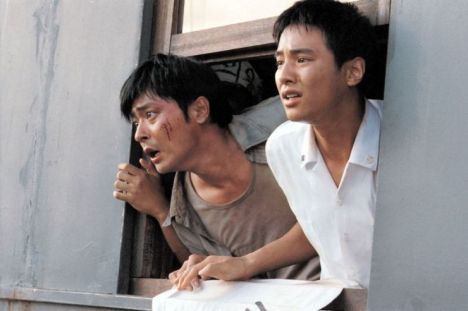 Jin Tae and Jin Seok are forced into the military draft

At the front line, it becomes apparent that Jin Seok’s health condition is serious. As such, Jin Tae volunteers for every risky mission that arises in the hope of earning a medal, and thus the influence to be able to send his younger brother home. Faults with the plan quickly become clear, as Jin Tae becomes increasingly adept at his missions and begins to lose his compassion, while Jin Seok begs his older brother to stop and retain his humanity. The relationship is reminiscent of Sgt. Barnes and Sgt. Elias in Platoon (1986), however the duality represented in Brotherhood is intensified as the brothers fight for each other in their own unique way. Even more compelling is how Jin Tae begins to lose himself in the accolades and cheers of his fellow soldiers until atrocities become second nature, forcing Jin Seok to reject his brother and his noble intentions.

As the American soldiers land in Incheon, and the South Korean forces push north toward China, the brothers are locked in the emotional battle with each, the appalling situations they are pitted against, and history as the Chinese forces will inevitably counterattack.  The acting by both leads is superb. Jang Dong Gun is incredible in his portrayal of shoe-shine boy turned psychotic soldier, and the rage in his eyes is genuinely terrifying. When he encounters the barbarity of war, his facial expressions of sorrow and anger convey more than words ever could. As the younger intellectual brother, Won Bin is equally tremendous as he continually gives an intense emotional performance whether suffering from health problems or fighting for his brothers conscience.

The aftermath of battle

Equally as profound is the musical score, which adds tangible  intensity to the film. The incredible battle sequences, the tender emotional moments, and even the silences are all given extra poignancy thanks to the score, and the haunting orchestral soundtrack stays long after the final credits.

Critics of Brotherhood often cite that certain scenes and scenarios are rendered melodramatic, and detracted from the authenticity of the viewing experience. However, it’s this emotional intensity that makes Brotherhood such an incredible film. While war films traditionally tend to focus on the lack of humanity and portray ever-increasing scenes of violence – or ‘war pornography’ – Brotherhood veers away from that trend to focus on the emotional bonds between family, and emerges stronger for it.

For Korean cinema, 2019 was a year that saw the continuation of trends that have been readily apparent for the past several years - an increasing number of big blockbuster/commercially-orientated films with high production values, and the decreasing quality of creative, engaging, and memorable stories. That is not to say the talent has disappeared of... END_OF_DOCUMENT_TOKEN_TO_BE_REPLACED
2018 was quite a bizarre year for Korean cinema. The year began much like any other. The first few months of the year were typically dedicated to family-friendly fare. News of Korean films that were... END_OF_DOCUMENT_TOKEN_TO_BE_REPLACED
While the films released throughout any particular year are indicative of a country's identity, for Korean cinema in 2017 the exploration of political and social issues were especially revealing of the cultural shift that has... END_OF_DOCUMENT_TOKEN_TO_BE_REPLACED

Acclaimed actress Jeon Do-yeon is to be honoured at the 21st Bucheon International Fantastic Film Festival (BiFan) this year, in celebration of her 20 year career that began with Contact back in 1997. Entitled 'Contact, Jeon Do-yeon,' the special program is dedicated to the revered actress and will feature highlights from her incredible filmography, including Secret Sunshine... END_OF_DOCUMENT_TOKEN_TO_BE_REPLACED
Director Kim Jong-Kwan is well-known to fans of independent Korean cinema. A graduate of the Seoul Institute of the Arts, his short film How to Operate a Polaroid... END_OF_DOCUMENT_TOKEN_TO_BE_REPLACED
We are just one week away from the start of the 2nd Korea International Expat Film Festival (KIXFF).  Festival director Kevin Lambert took some time from his busy schedule to answer questions about the festival which... END_OF_DOCUMENT_TOKEN_TO_BE_REPLACED

Having a film selected to premiere at the Cannes Film Festival is an incredible achievement - having two is quite extraordinary. Yet that is precisely what director Hong Sang-soo has done, as The Day After (그 후) and Claire's Camera (클레어의 카메라) are due to be screened, with both films starring actress Kim Min-hee. Selected for the 'In Competition'... END_OF_DOCUMENT_TOKEN_TO_BE_REPLACED
The Villainess (악녀) has received an explosive trailer in the run-up to its debut at the Cannes Film Festival on May 21st. Appearing in the 'Out of Competition - Midnight Projections' program, writer/director Jung Byung-gil's latest... END_OF_DOCUMENT_TOKEN_TO_BE_REPLACED
Director Bong Joon-ho's Okja (옥자) is almost upon us. The highly anticipated science-fiction/drama is set to premiere In Competition at the Cannes Int. Film Festival on May 19th, before appearing on Korean cinema screens around June... END_OF_DOCUMENT_TOKEN_TO_BE_REPLACED
Loading Comments...