For any independent film maker, getting the project off the ground is a daunting task. While the freedom from studios is enviable, the production costs have the potential to escalate due to an incredible variety of external factors. Having a established actor/actress is therefore something of a coup, often guaranteeing both finance and audience revenue. Interesting then, that writer/director Min Yong-geun (민용근) intentionally chose not to cast any renowned stars in his second feature length film Re-encounter (혜화,동), rather allowing for the narrative to be the centerpiece.

Hye-hwa (Yoo Da-in (유다인) works for a canine veterinary surgery in a small rustic town. During the day she often visits the abandoned and dilapidated area on the outskirts of town where feral dogs roam, in a bid to save and treat them before they are caught by a cruel dog-napper. That is, until she surprisingly re-encounters ex-boyfriend Han-soo (Yoo Yeon-seok (유연석). Han-soo informs Hye-hwa that the child they had together years earlier, and believed to be dead, is actually alive and has been adopted. Forced to face the pain of her past, Hye-hwa’s life becomes increasingly fraught with the stress of who she is, and who she feels she ought to be.

Director Min Yong-geun (민용근) has constructed a a very delicately paced drama, and wonderfully conveys Hye-hwa’s life as lonely and fragile. As she walks through the desolate landscape of abandoned buildings and feral animals, Hye-hwa is actually allegorically exploring the fragments of her consciousness which has never healed following the traumatic loss of her baby. Similarly, her passionate desire to find and treat the sick dogs in the area are the result of Hye-hwa’s inability to cope with her loss, chasing the helpless inside her psychosis as she desperately tries to exert control over the one thing she can never rectify. If all this sounds like an enormous burden, it is; the large red muffler that Hye-hwa wears is symbolic of the enormous strain she ‘wears’ day after day that weighs her down and threatens to engulf her.

Min Yong-geun also interrogates the root of Hye-hwa’s neurosis, highlighting the archaic notion of ‘the family unit’ in Korean culture as the cause of disruption. As Hye-hwa and Han-soo were only (unmarried) teenagers at the time of pregnancy, the families of both intervened and removed the decision process from the parents-to-be. Spiraling out this domineering attitude are two psychologically and emotionally scarred young people, and the director expertly conveys their trauma through the subtle use of the mise-en-scene and slow pacing. 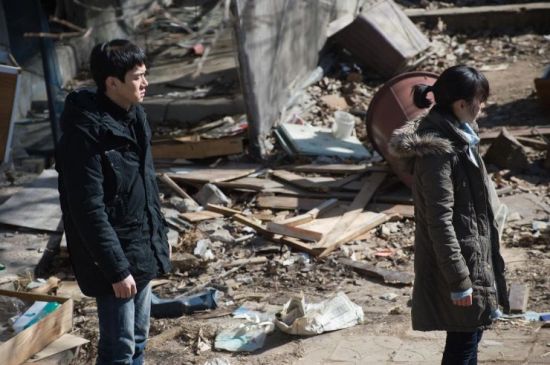 The decision to use non-prolific actors is an interesting one and serves the narrative well, adding a shade more realism than more renowned counterparts. Yoo Da-in gives an incredibly restrained and subtle performance, and fully deserves her nomination for ‘Best Actress’ at the 32nd Blue Dragon Film Awards. Her expression of conflict as she cannot part with her cut nails is poignant and moving, as is her inability to recognise her underlying neurosis but determination to continue a ‘normal’ life. Yoo Yeon-seok fares less well, and while his performance is competent it fails to attract the same level of empathy as his love interest. This is perhaps unfair as this is also due to the significantly less screen-time he is provided, as the narrative belongs to the emotional turmoil of Hye-hwa.

Re-encounter is a thought provoking and restrained exploration of how trauma becomes a part of a person’s character when not confronted. It is incredibly slow-paced as director Min Yong-geun establishes his protagonists through imagery, which is something of a double-edged sword; while the mise-en-scene is expertly crafted, the characterization suffers slightly through the lack of interaction with others. But then, in highlighting their loneliness, Min Yong-geun emphasizes that such reconciliation is the fundamental way in which to begin healing trauma, and has crafted a touching humanist story in making such a statement.

For Korean cinema, 2019 was a year that saw the continuation of trends that have been readily apparent for the past several years - an increasing number of big blockbuster/commercially-orientated films with high production values, and the decreasing quality of creative, engaging, and memorable stories. That is not to say the talent has disappeared of... END_OF_DOCUMENT_TOKEN_TO_BE_REPLACED
2018 was quite a bizarre year for Korean cinema. The year began much like any other. The first few months of the year were typically dedicated to family-friendly fare. News of Korean films that were... END_OF_DOCUMENT_TOKEN_TO_BE_REPLACED
While the films released throughout any particular year are indicative of a country's identity, for Korean cinema in 2017 the exploration of political and social issues were especially revealing of the cultural shift that has... END_OF_DOCUMENT_TOKEN_TO_BE_REPLACED

Acclaimed actress Jeon Do-yeon is to be honoured at the 21st Bucheon International Fantastic Film Festival (BiFan) this year, in celebration of her 20 year career that began with Contact back in 1997. Entitled 'Contact, Jeon Do-yeon,' the special program is dedicated to the revered actress and will feature highlights from her incredible filmography, including Secret Sunshine... END_OF_DOCUMENT_TOKEN_TO_BE_REPLACED
Director Kim Jong-Kwan is well-known to fans of independent Korean cinema. A graduate of the Seoul Institute of the Arts, his short film How to Operate a Polaroid... END_OF_DOCUMENT_TOKEN_TO_BE_REPLACED
We are just one week away from the start of the 2nd Korea International Expat Film Festival (KIXFF).  Festival director Kevin Lambert took some time from his busy schedule to answer questions about the festival which... END_OF_DOCUMENT_TOKEN_TO_BE_REPLACED

Having a film selected to premiere at the Cannes Film Festival is an incredible achievement - having two is quite extraordinary. Yet that is precisely what director Hong Sang-soo has done, as The Day After (그 후) and Claire's Camera (클레어의 카메라) are due to be screened, with both films starring actress Kim Min-hee. Selected for the 'In Competition'... END_OF_DOCUMENT_TOKEN_TO_BE_REPLACED
The Villainess (악녀) has received an explosive trailer in the run-up to its debut at the Cannes Film Festival on May 21st. Appearing in the 'Out of Competition - Midnight Projections' program, writer/director Jung Byung-gil's latest... END_OF_DOCUMENT_TOKEN_TO_BE_REPLACED
Director Bong Joon-ho's Okja (옥자) is almost upon us. The highly anticipated science-fiction/drama is set to premiere In Competition at the Cannes Int. Film Festival on May 19th, before appearing on Korean cinema screens around June... END_OF_DOCUMENT_TOKEN_TO_BE_REPLACED
Loading Comments...