While narrative conventions of heterosexual relationships enjoy an almost absurd level of repetition, homosexual couples are still very much a rarity in world cinema. This is especially so in Korea, where homosexuality has only in recent times considered to even be in existence. In a culture predicated on the importance of marriage, the traditional family unit, and the continuation of bloodlines, Korea has – as with other countries – struggled to accept gay culture within itself.

This is precisely the situation tackled by first time director Kim Jo Kwang-su (김조광수) who, upon discovering the extreme lack of ‘queer’ movies in the Korean film industry, resolved to redress the balance. With Two Weddings and a Funeral (두 번의 결혼식과 한 번의 장례식) the director explores the complexity of being gay in contemporary Korea, as a gay man and lesbian woman marry to offset suspicion. The film is an interesting amalgamation of camp comedy and social issues although never manages to perfect the cohesion between the two, resulting in an enjoyably quirky yet underdeveloped romantic-comedy.

In a lovely ceremony, Min-su (Kim Dong-yoon (김동윤) and Hyo-jin (Ryu Hyeon-kyeong (류현경) are married in front of their dearest loved ones, all of whom are blissfully happy that the couple can now enjoy wedded life and the happiness that follows. Yet unbeknownst to them both Min-su and Hyo-jin are homosexual, performing the sham marriage to halt nagging parents and to help adopt an abandoned baby. While Hyo-jin’s lesbian lover Seo-yeong (Jeong Ae-yeon (정애연) lives next door, Min-su’s new boyfriend Seok (Song Yong-jin (송용진) moves into the marital home. As family members, friends and colleagues become evermore curious about Min-su and Hyo-jin’s relationship, their ruse becomes increasingly problematic with the tension threatening to destroy everything they have worked so hard to conceal. 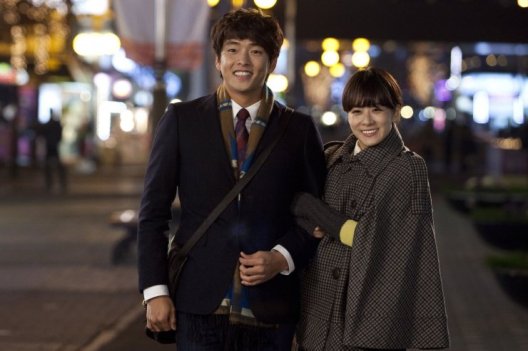 From the outset Two Weddings and a Funeral is a jovial affair, as Min-su explains with the use of graphics and diagrams his frustrations at being a gay Korean man, which is wonderfully juxtaposed with the sham wedding ceremony in which only a select few know the truth beneath the huge smiles. Once things settle however the film struggles to find direction, introducing Min-su’s gay friends who act as comic relief, and a troupe performance in which he is due to feature, as the only impetus for the troubled young man. It is only with the inception of Korean-American Seok that Two Weddings and a Funeral begins to take flight, exploring his and Min-su’s burgeoning relationship that must be hidden from prying eyes, which director  Kim Jo Kwang-su poignantly conveys as simultaneously saddening, frightening, exciting and romantic in equal measure. Their relationship is wonderfully charming, featuring kissing and other amorous scenes that contain far greater passion than most heterosexual scenes of a similar nature, while both protagonists also experience their own different forms of prejudice and pressure to conform. Themes of traditional marriage are also humorously undermined through the unscheduled visitations of Min-su’s mother, as Hyo-jin must not only pretend to understand her husband implicitly but also adhere to the stereotypical role of the dutiful wife. As such gender politics as well as sexuality are interrogated in a thought-provoking (albeit farcical) manner.

Yet Two Weddings and a Funeral never quite knows what film it wants to be, and as such the balance between comical gay life and socio-cultural examination do not coalesce well. Min-su has, other than to stop his nagging parents, no real reason to marry and his plans are rather immature while Hyo-jin needs the marriage to help adopt an abandoned child. The decision to focus on Min-su and his gay friends results in the shocking underutilization of Hyo-jin’s incredibly important narrative arc, as the potential to show homosexuals as loving parents is wasted. Hyo-jin and lesbian lover Seo-yeong feature very little throughout the film despite their relevance, with the extensive time devoted to Min-su’s gay pals somewhat of a mystery as aside from comic relief they offer precious little else. Additionally these friends are generally woeful as they are essentially infantile stereotypical ‘queens’ rather than fully formed characters, with the overacting at times cringeworthy as they ‘perform’ gayness in a silly and irreverent manner. This is acutely ironic as the writers go to great lengths in attempting to dispel myths surrounding homosexuality yet they – and the male actors – seem unaware of what being gay truly is, aligning it with overt-feminization and transvestitism throughout the narrative on several occasions. The most prominent character in this regard is Tina (Park Jeong-pyo (박정표) who is a genuine irritation, yet during more intimate scenes where over-indulgences and ‘performing’ homosexuality are cast aside the protagonist is highly likable and conveys the potential of a route not followed. As the title suggests there are three events that take place and while the first wedding is the catalyst for the film, the funeral is predictable and the second marriage fantastical. The funeral could have spurred an incredible social drama with the married couple yet instead with limited running time remaining, the writers clearly wrote themselves into a corner and the ending, despite being jovial and in keeping with the opening, feels tacked on for the sake of brevity.

As the central couple of Two Weddings and a Funeral, Min-su and Seok – played by Kim Dong-yoon and Song Yong-jin respectively – are a delight. Neither one portrays homosexuality as a ‘performance’ and as such their sexuality and their relationship are conveyed as natural and organic. Song Yong-jin is by far the best actor in the film as he inhabits a fraught individuality, playful and innocent whilst on dates yet poignant and emotive when relaying his past. Kim Dong-yoon is much more stoic than his co-star making him less likable initially, yet he seems to loosen as time passes and his emotional scenes are competent.

The supporting cast of gay men provide occasional moments of comedy, yet are generally frustrating with their ‘performances’ of homosexuality as extremely-feminized men. As such the artifice of their acting and roles shine through and hampers the narrative, which would not be so problematic if they actually contributed to Min-su and Seok’s journey in any way. Unfortunately, aside from – ironically – creating a stage performance, they do not and their inclusion tends to detract from the main arc.

It is difficult to comment on Ryoo Hyeon-kyeong and Jeong Ae-yeon who, as long-term lesbian lovers Hyo-jin and Seo-young, are pushed to the fringes in order to focus on Min-su. While on screen both actresses are competent and convey their predicament with sincerity. 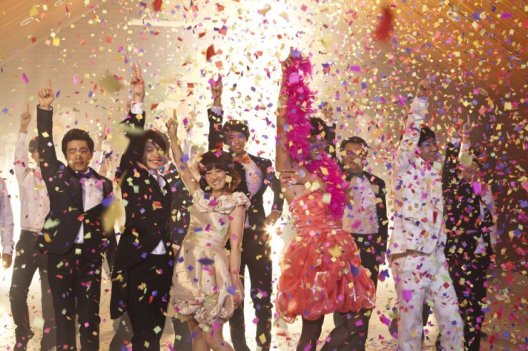 Two Weddings and a Funeral is an interesting take on homosexuality in contemporary Korea, with a compelling central couple (who convey more romance and passion than a lot of heterosexual counterparts) and a mixture of comical sequences and socio-cultural examinations. However the disparate features never quite manage to converge as a unified whole, with a supporting cast that offers precious little while other more intriguing arcs are brushed aside. As such Two Weddings and a Funeral is generally light-hearted fare that, while enjoyable, never fulfills its potential.

For Korean cinema, 2019 was a year that saw the continuation of trends that have been readily apparent for the past several years - an increasing number of big blockbuster/commercially-orientated films with high production values, and the decreasing quality of creative, engaging, and memorable stories. That is not to say the talent has disappeared of... END_OF_DOCUMENT_TOKEN_TO_BE_REPLACED
2018 was quite a bizarre year for Korean cinema. The year began much like any other. The first few months of the year were typically dedicated to family-friendly fare. News of Korean films that were... END_OF_DOCUMENT_TOKEN_TO_BE_REPLACED
While the films released throughout any particular year are indicative of a country's identity, for Korean cinema in 2017 the exploration of political and social issues were especially revealing of the cultural shift that has... END_OF_DOCUMENT_TOKEN_TO_BE_REPLACED

Acclaimed actress Jeon Do-yeon is to be honoured at the 21st Bucheon International Fantastic Film Festival (BiFan) this year, in celebration of her 20 year career that began with Contact back in 1997. Entitled 'Contact, Jeon Do-yeon,' the special program is dedicated to the revered actress and will feature highlights from her incredible filmography, including Secret Sunshine... END_OF_DOCUMENT_TOKEN_TO_BE_REPLACED
Director Kim Jong-Kwan is well-known to fans of independent Korean cinema. A graduate of the Seoul Institute of the Arts, his short film How to Operate a Polaroid... END_OF_DOCUMENT_TOKEN_TO_BE_REPLACED
We are just one week away from the start of the 2nd Korea International Expat Film Festival (KIXFF).  Festival director Kevin Lambert took some time from his busy schedule to answer questions about the festival which... END_OF_DOCUMENT_TOKEN_TO_BE_REPLACED

Having a film selected to premiere at the Cannes Film Festival is an incredible achievement - having two is quite extraordinary. Yet that is precisely what director Hong Sang-soo has done, as The Day After (그 후) and Claire's Camera (클레어의 카메라) are due to be screened, with both films starring actress Kim Min-hee. Selected for the 'In Competition'... END_OF_DOCUMENT_TOKEN_TO_BE_REPLACED
The Villainess (악녀) has received an explosive trailer in the run-up to its debut at the Cannes Film Festival on May 21st. Appearing in the 'Out of Competition - Midnight Projections' program, writer/director Jung Byung-gil's latest... END_OF_DOCUMENT_TOKEN_TO_BE_REPLACED
Director Bong Joon-ho's Okja (옥자) is almost upon us. The highly anticipated science-fiction/drama is set to premiere In Competition at the Cannes Int. Film Festival on May 19th, before appearing on Korean cinema screens around June... END_OF_DOCUMENT_TOKEN_TO_BE_REPLACED