Despite his young age, Min-su (Jo Dong-in (조동인) is an extremely intelligent and talented baduk (Go) player. To make ends meet and with few prospects, Min-su uses his skills to hustle other players, forming friendships with small-time crooks as well as making several enemies in the criminal underworld. Yet when a local mob boss (Kim Roe-ha (김뢰하) unwittingly challenges Min-su to a duel and loses with significant embarrassment, the gangster hires Min-su as his baduk teacher and the two become close, changing them both irrevocably.

First and foremost, The Stone (스톤) is a palpable love letter to the game of baduk, often referred to as ‘Go.’ Director Cho Se-rae (조세래) uses the game as a form in which to emphasise a person’s personality through their technique, as well as to express the evolving relationships between players.  Baduk is continually conveyed as something of a gentleman’s game, requiring a cool demeanor and keen intellect to truly master. As such the unlikely bond that forms between hustler Min-su and the gang boss is quite believable, as they converse about increasingly personal stories during their friendly matches. Their tournaments also allow them to gain insight into each other’s lives. The gangster recognises his own tormented youth in Min-su, while Min-su dislikes the path the boss has chosen yet sees it before himself, and as their bond increases they attempt to guide each other while playing. 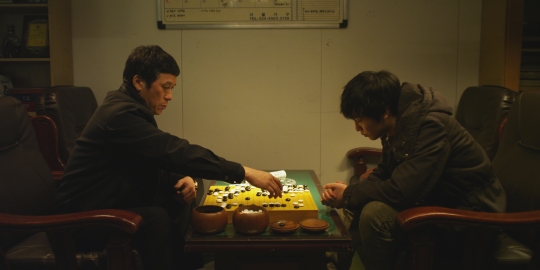 However at nearly two hours in length The Stone is far too long, as the story continually expands to add further menial sub-plots that are quite unnecessary. It is also acutely ironic that with such an excessive running time that the character development is also quite minimal. Despite the fact that Min-su and the gangster are the central protagonists, surprisingly little depth is ascribed to either. Hints are alluded to, such as Min-su’s unrepentant mother who suffers from a gambling addiction, yet there are precious few moments that help to define the characters in any detail, nor give any reason why the audience should care about them. As such the film becomes a series of vignettes about baduk in the criminal underworld, rather than a character-driven study.

Luckily Park Won-sang (박원상) is on hand to provide a wonderfully charismatic and humourous performance as the mob’s second-in-command. The actor has risen to prominence in recent years following his roles in Unbowed (부러진 화살) and National Security (남영동 1985), and as a foolish gangster who constantly oversteps his bounds he brings a sense of genuine enjoyment to The Stone. Whenever Park Won-sang appears on screen he overshadows everyone with his performance, yet he is no mere comedic foil as he infuses the character with a deep such of integrity and loyalty, as well as danger, that makes him extremely likable. It is often due to his appearances within the vignette-style storytelling that The Stone becomes an entertaining film.

The mob boss uses baduk as respite from his violent world

The Stone is an interesting drama about the game of baduk (Go). Conveyed as a gentleman’s game, director Cho Se-rae uses it as a way for characters to develop relationships, as well as a window into the gambling habits of the criminal underworld. Yet the overly long running time and lack of character development, in conjunction with the vignette-style storytelling, stops the film from being a deep and compelling exploration. Actor Park Won-sang makes the film entertaining whenever he appears, yet even with his significant performance The Stone is a rather standard affair.

For Korean cinema, 2019 was a year that saw the continuation of trends that have been readily apparent for the past several years - an increasing number of big blockbuster/commercially-orientated films with high production values, and the decreasing quality of creative, engaging, and memorable stories. That is not to say the talent has disappeared of... END_OF_DOCUMENT_TOKEN_TO_BE_REPLACED
2018 was quite a bizarre year for Korean cinema. The year began much like any other. The first few months of the year were typically dedicated to family-friendly fare. News of Korean films that were... END_OF_DOCUMENT_TOKEN_TO_BE_REPLACED
While the films released throughout any particular year are indicative of a country's identity, for Korean cinema in 2017 the exploration of political and social issues were especially revealing of the cultural shift that has... END_OF_DOCUMENT_TOKEN_TO_BE_REPLACED

Acclaimed actress Jeon Do-yeon is to be honoured at the 21st Bucheon International Fantastic Film Festival (BiFan) this year, in celebration of her 20 year career that began with Contact back in 1997. Entitled 'Contact, Jeon Do-yeon,' the special program is dedicated to the revered actress and will feature highlights from her incredible filmography, including Secret Sunshine... END_OF_DOCUMENT_TOKEN_TO_BE_REPLACED
Director Kim Jong-Kwan is well-known to fans of independent Korean cinema. A graduate of the Seoul Institute of the Arts, his short film How to Operate a Polaroid... END_OF_DOCUMENT_TOKEN_TO_BE_REPLACED
We are just one week away from the start of the 2nd Korea International Expat Film Festival (KIXFF).  Festival director Kevin Lambert took some time from his busy schedule to answer questions about the festival which... END_OF_DOCUMENT_TOKEN_TO_BE_REPLACED

Having a film selected to premiere at the Cannes Film Festival is an incredible achievement - having two is quite extraordinary. Yet that is precisely what director Hong Sang-soo has done, as The Day After (그 후) and Claire's Camera (클레어의 카메라) are due to be screened, with both films starring actress Kim Min-hee. Selected for the 'In Competition'... END_OF_DOCUMENT_TOKEN_TO_BE_REPLACED
The Villainess (악녀) has received an explosive trailer in the run-up to its debut at the Cannes Film Festival on May 21st. Appearing in the 'Out of Competition - Midnight Projections' program, writer/director Jung Byung-gil's latest... END_OF_DOCUMENT_TOKEN_TO_BE_REPLACED
Director Bong Joon-ho's Okja (옥자) is almost upon us. The highly anticipated science-fiction/drama is set to premiere In Competition at the Cannes Int. Film Festival on May 19th, before appearing on Korean cinema screens around June... END_OF_DOCUMENT_TOKEN_TO_BE_REPLACED
Join 143 other subscribers