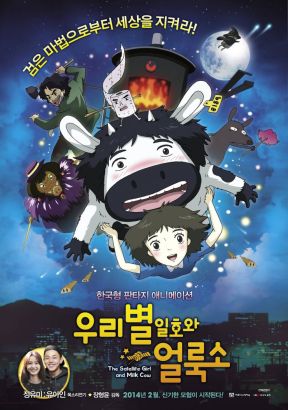 After circling the Earth for years transmitting data, satellite Il-ho (Jeong Yu-mi (정유미) intercepts the sound of a beautiful song. Nearly at the end of its lifespan, Il-ho decides to return home and find the source of the song before its power is drained completely. Upon arriving however, Il-ho discovers a walking, talking milk cow being pursued by a giant incinerator, and upon impact with the metal creature Il-ho is transformed into the form of a girl. With the help of magical toilet paper Merlin the wizard, they discover that the milk cow is actually musician Kyeong-cheon (Yoo Ah-in (유아인), and the group try to set him free of the curse while fighting against those who would steal his liver. 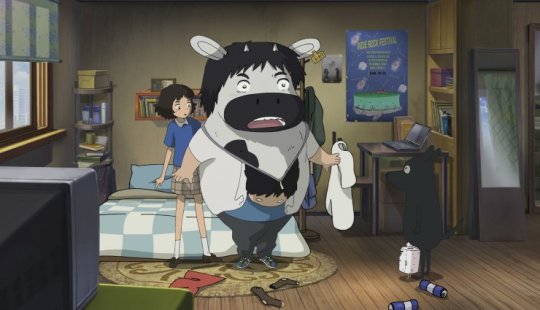 Upon release, The Satellite Girl and Milk Cow (우리별 일호와 얼룩소) had certain critics comparing it with Japanese animation maestro Hayao Miyazaki’s Studio Ghibli output, which is both huge praise as well as a disservice. Writer/director Jang Hyeong-yoon’s (장형윤) feature length is a charming animation that features wonderfully quirky and lovable characters who traverse different realms, which is undoubtedly the source of such comparisons, yet the film is also a uniquely Korean blend of sci-fi and fantasy that ultimately lacks the grace and polish of Miyazaki’s work.

The Satellite Girl and Milk Cow is certainly one of the most entertaining and wacky family-orientated Korean animations in quite some time. Director Jang has impressively combined the conventions of science-fiction with magical fantasy and the results are consistently enjoyable and fun, particularly due to the wonderfully eccentric cast of characters. Kyeong-cheon is front and center in this regard as the visually comedic milk cow, with the obstacles he endures to become human forming the crux of the narrative. The gags often come at his expense and are often really enjoyable, especially scenes in which he has difficulties with his human ‘suit’ made of toilet paper and his attempts to continue living as he did before his transformation. Other jokes tend to come out of left field, such as literally being milked in order to pay the rent, which are quite odd yet are still amusing. Kyeong-cheon’s melodramatic character works well when playing off robotic satellite girl Il-ho and bizarre tissue magician Merlin. Their conversations and conflicts are by far the most entertaining and engaging feature of the film and drive the story forward. 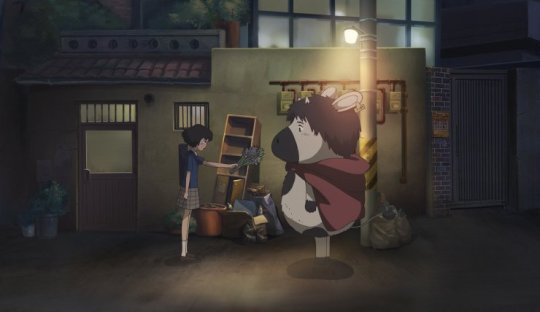 Yet while the animation is fluid and the characters charming, The Satellite Girl and Milk Cow comes undone due to the haphazard narrative. The screenplay really requires several more rewrites as the film is mostly comprised of a series of sketches rather than an overarching story, and while such vignettes are enjoyable there really isn’t a sense of a greater story being told.  As Kyeong-cheon attempts to continue his life as a milk cow and Il-ho seeks to understand her purpose of existence, a variety of tangents enter the fray that stop both of them from exploring such desires, serving as fun yet distracting moments from the greater quests at hand. Such events rarely contribute to the story and often create a greater number of sub-stories that never achieve fruition.

As the story tends to jump between various events further supporting characters are also introduced, including an old witch in the form of a boar as well as a shadow organisation that harvests the livers of citizens-turned-animals. Each inception holds a new and interesting concept yet they are never explored or capitalised on, and have very little impact on the overall story. A prime example is the giant incinerator, which exists solely as a central threat in the film without rhyme or reason, appearing when the story has no other place to maneuver and needs a sense of urgency. There are so many unresolved elements within the film that, combined with the unfocused central story, serve to make The Satellite Girl and Milk Cow an enjoyable but not particularly magical viewing experience. 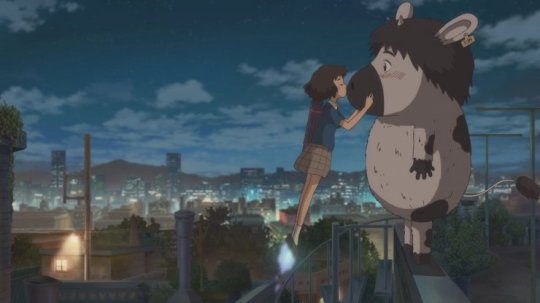 The Satellite Girl and Milk Cow is one of the most entertaining family-orientated animations to come from Korea in quite some time. It’s a charming effort by writer/director Jang Hyeong-yoon who blends the worlds of magic and sci-fi well, but it’s let down by a haphazard script and too many characters and tangents that go unresolved, making the film an enjoyable experience rather than a magical one.

For Korean cinema, 2019 was a year that saw the continuation of trends that have been readily apparent for the past several years - an increasing number of big blockbuster/commercially-orientated films with high production values, and the decreasing quality of creative, engaging, and memorable stories. That is not to say the talent has disappeared of... END_OF_DOCUMENT_TOKEN_TO_BE_REPLACED
2018 was quite a bizarre year for Korean cinema. The year began much like any other. The first few months of the year were typically dedicated to family-friendly fare. News of Korean films that were... END_OF_DOCUMENT_TOKEN_TO_BE_REPLACED
While the films released throughout any particular year are indicative of a country's identity, for Korean cinema in 2017 the exploration of political and social issues were especially revealing of the cultural shift that has... END_OF_DOCUMENT_TOKEN_TO_BE_REPLACED

Acclaimed actress Jeon Do-yeon is to be honoured at the 21st Bucheon International Fantastic Film Festival (BiFan) this year, in celebration of her 20 year career that began with Contact back in 1997. Entitled 'Contact, Jeon Do-yeon,' the special program is dedicated to the revered actress and will feature highlights from her incredible filmography, including Secret Sunshine... END_OF_DOCUMENT_TOKEN_TO_BE_REPLACED
Director Kim Jong-Kwan is well-known to fans of independent Korean cinema. A graduate of the Seoul Institute of the Arts, his short film How to Operate a Polaroid... END_OF_DOCUMENT_TOKEN_TO_BE_REPLACED
We are just one week away from the start of the 2nd Korea International Expat Film Festival (KIXFF).  Festival director Kevin Lambert took some time from his busy schedule to answer questions about the festival which... END_OF_DOCUMENT_TOKEN_TO_BE_REPLACED

Having a film selected to premiere at the Cannes Film Festival is an incredible achievement - having two is quite extraordinary. Yet that is precisely what director Hong Sang-soo has done, as The Day After (그 후) and Claire's Camera (클레어의 카메라) are due to be screened, with both films starring actress Kim Min-hee. Selected for the 'In Competition'... END_OF_DOCUMENT_TOKEN_TO_BE_REPLACED
The Villainess (악녀) has received an explosive trailer in the run-up to its debut at the Cannes Film Festival on May 21st. Appearing in the 'Out of Competition - Midnight Projections' program, writer/director Jung Byung-gil's latest... END_OF_DOCUMENT_TOKEN_TO_BE_REPLACED
Director Bong Joon-ho's Okja (옥자) is almost upon us. The highly anticipated science-fiction/drama is set to premiere In Competition at the Cannes Int. Film Festival on May 19th, before appearing on Korean cinema screens around June... END_OF_DOCUMENT_TOKEN_TO_BE_REPLACED
Join 143 other followers