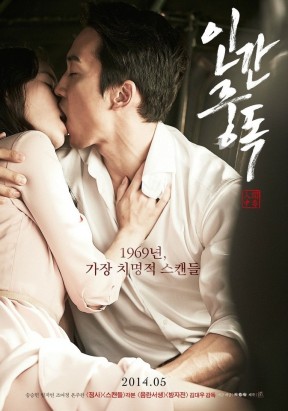 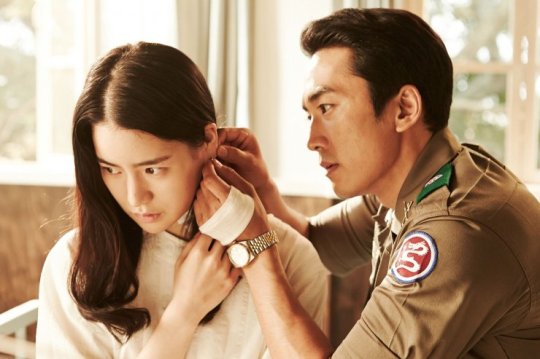 The year is 1969. Commander Kim Jin-pyeong (Song Seung-heon (송승헌) is a respected Vietnam War veteran at the military base he now resides, making great effort to hide his dependence on anxiety medication due to past trauma. Life is generally quite agreeable, except for Jin-pyeong and his wife’s (Jo Yeo-jeong (조여정) struggles to become pregnant. When a subordinate (On Joo-wan (온주완) arrives on base with his Chinese wife Jong Ga-heun (Lim Ji-yeon (임지연), Jin-pyeong feels an immediate, uncontrollable attraction…one is equally reciprocated. As he and Ga-heun begin their passionate affair, their desires threaten to destroy everything around them as well as their very sanity.

From the outset, it becomes very clear that director Kim is attempting to emulate Ang Lee’s masterful Lust, Caution mixed with classic American melodrama. He moderately succeeds yet mostly in terms of production design, as the sets, mise-en-scene and costumes are truly impressive and are wonderful in creating the world in which the affair takes place. The care and detail applied to each scene, whether in the homestead, hospital, or local dance bar, is consistently remarkable and does wonders in drawing the audience into the narrative, and the production team deserve to be congratulated. That said, Obsessed feels more skin to an American production as aside from the actors, there is very little evidence of Korean culture on screen. Interestingly efforts are made to convey ’50s era American housewives through hierarchy and gossiping, and to authenticate Ga-heun’s Chinese nationality through the crude inclusion of bird cages, yet surprisingly, other than the language, there’s little to suggest the film is Korean.

Despite the strength of the production values, it’s not enough to distract from the poor script and mediocre acting. The power of a film of this nature lies primarily on the build of passion and the chemistry between the lead actors, and in this respect Obsessed is lacking. The event at the hospital that initially draws Ga-heun and Jin-pyeong together is silly at best, conveying the commander as inept rather than a strong military leader, with later confrontations equally as contrived. The quiet stoicism both actors exude, particularly Lim Ji-yeon, makes such cliches stand out all the more meaning that when the couple declare their love it feels more like a leap in logic rather than a natural and sincere build of emotion.

Despite such criticisms, Obsessed is entertaining for the most part. Fans of the genre will undoubtedly enjoy the story and derive pleasure from witnessing such cliches play out, while others will find the drama to be a watchable experience. Obsessed is generally a competent film though one of little depth, leading to a final act where the narrative jumps head-first into the pitfall of attempting to melodramatically wrap up all the narrative threads, yet as the film is generally dispassionate such scenes have little emotional impact.

Jin-pyeong suffers a crisis of morality, and must come to terms with his actions

For Korean cinema, 2019 was a year that saw the continuation of trends that have been readily apparent for the past several years - an increasing number of big blockbuster/commercially-orientated films with high production values, and the decreasing quality of creative, engaging, and memorable stories. That is not to say the talent has disappeared of... END_OF_DOCUMENT_TOKEN_TO_BE_REPLACED
2018 was quite a bizarre year for Korean cinema. The year began much like any other. The first few months of the year were typically dedicated to family-friendly fare. News of Korean films that were... END_OF_DOCUMENT_TOKEN_TO_BE_REPLACED
While the films released throughout any particular year are indicative of a country's identity, for Korean cinema in 2017 the exploration of political and social issues were especially revealing of the cultural shift that has... END_OF_DOCUMENT_TOKEN_TO_BE_REPLACED

Acclaimed actress Jeon Do-yeon is to be honoured at the 21st Bucheon International Fantastic Film Festival (BiFan) this year, in celebration of her 20 year career that began with Contact back in 1997. Entitled 'Contact, Jeon Do-yeon,' the special program is dedicated to the revered actress and will feature highlights from her incredible filmography, including Secret Sunshine... END_OF_DOCUMENT_TOKEN_TO_BE_REPLACED
Director Kim Jong-Kwan is well-known to fans of independent Korean cinema. A graduate of the Seoul Institute of the Arts, his short film How to Operate a Polaroid... END_OF_DOCUMENT_TOKEN_TO_BE_REPLACED
We are just one week away from the start of the 2nd Korea International Expat Film Festival (KIXFF).  Festival director Kevin Lambert took some time from his busy schedule to answer questions about the festival which... END_OF_DOCUMENT_TOKEN_TO_BE_REPLACED

Having a film selected to premiere at the Cannes Film Festival is an incredible achievement - having two is quite extraordinary. Yet that is precisely what director Hong Sang-soo has done, as The Day After (그 후) and Claire's Camera (클레어의 카메라) are due to be screened, with both films starring actress Kim Min-hee. Selected for the 'In Competition'... END_OF_DOCUMENT_TOKEN_TO_BE_REPLACED
The Villainess (악녀) has received an explosive trailer in the run-up to its debut at the Cannes Film Festival on May 21st. Appearing in the 'Out of Competition - Midnight Projections' program, writer/director Jung Byung-gil's latest... END_OF_DOCUMENT_TOKEN_TO_BE_REPLACED
Director Bong Joon-ho's Okja (옥자) is almost upon us. The highly anticipated science-fiction/drama is set to premiere In Competition at the Cannes Int. Film Festival on May 19th, before appearing on Korean cinema screens around June... END_OF_DOCUMENT_TOKEN_TO_BE_REPLACED
Loading Comments...