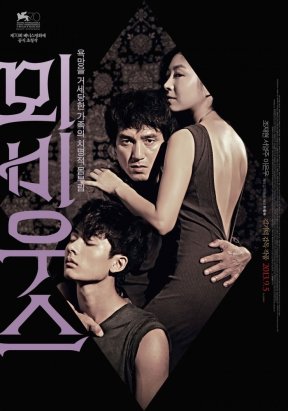 The controversy that continually surrounds director Kim Ki-duk (김기덕) ultimately stems from his consistent explorations into the nature of sexuality, and the misogynistic representations that arise through them. Director Kim is clearly aware how such explicit sexual debates generate audience interest, as with each subsequent film he seemingly seeks to outdo himself by exploring ever-darker – and for many, disturbing – areas of desire and pleasure.

Incest appears to be director Kim’s current interest as, following on from his acclaimed and award-winning Pieta, comes Moebius (뫼비우스). Featuring zero dialogue, the film is an extremely literal Freudian interpretation of sexuality within the family unit. The story is interesting but far from subtle as the Oedipus complex, female hysteria and phallus appropriation is viscerally reenacted. Ultimately Kim’s film is intriguing to watch, yet Moebius lacks the depth and finesse of his prior work.

Pushed to breaking point by her husband’s (Jo Jae-hyeon (조재현) infidelity, the mother (Lee Eun-woo (이은우) arms herself with a knife and attempts to sever his penis while he sleeps. Foiled in her attempt, the mother then decides to punish their son (Seo Yeong-joo (서영주) instead, cutting off the boy’s manhood. After the mother runs away in shame, the father and son attempt to rebuild their lives and learn to experience pleasure through pain. However when the mother returns, their lives become increasingly fraught.

The hysterical mother severs her son’s penis, sparking a chain of events

Director Kim has never been most subtle of filmmakers, yet his work often contains interesting symbolism that alludes to the depth of his characters and/or the socio-cultural issues he explores. With Moebius, however, such sensibilities take somewhat of a back seat as Freudian theories are quite literally recreated on screen. This is acutely ironic as Freud’s work is often rooted within symbolic moments of everyday life, notably in this case the Oedipus complex and castration anxiety, yet director Kim seems unconcerned with such motifs and instead directs the actors to perform the frameworks physically. The result is a mixture of intrigue and horror, as ‘the monstrous castrating mother’ fulfills the promise of her title, while the themes of incest associated with the Oedipus complex become increasingly explicit. It’s thoroughly interesting to see Freud’s theories play out, however the absurdity of it all can occasionally be cringe inducing, or worse, comical.

Roles with no dialogue are challenging at best, but with scenes such as the ones in Moebius it must undoubtedly be extremely arduous. Luckily all three principle actors perform convincingly. Lee Eun-woo is exceptional in her joint roles as an hysterical mother as well as a convenience store clerk. As the mother Lee Eun-woo conveys a powerful raw intensity that is simultaneously frightening yet attractive, while her vulnerability  and inner strength as the clerk is touching. Teenager Seo Yeong-joo also performs admirably as the son who experiences horrific trauma. At 15 years old the role is quite a shocking one given the explicit scenes in which he is required, yet he does very well particularly when conveying the pleasure and pain from sadist acts.

Phallic appropriation abounds as the Oedpius complex plays out

Moebius (뫼비우스) is yet another powerful and disturbing exploration of sexuality from director Kim Ki-duk. In quite literally – and explicitly – interpreting Freudian theories on screen, director Kim has crafted a very interesting film yet due to the far from unsubtle adaptation the absurdity of it all can often be cringeworthy and/or comical. Lee Eun-woo is undoubtedly the breakout star of the film as she performs with incredibly intensity throughout as the monstrous jealous mother. Moebius is not for the faint-hearted.

For exciting new Korean films, the Korean Cinema Today program at the Busan International Film Festival (BIFF) highlights some of the best and latest productions emerging from the industry.

The 14 films in Panorama 2013 contains some of the biggest names working in the industry today. For arthouse fans, Kim Ki-duk’s highly controversial Moebius, as well as two Hong Sang-soo films – Nobody’s Daughter Haewon and Our Sunhi – make appearances. Two directorial debuts are included in the form of superstar Ha Jeong-woo’s Fasten Your Seatbelt, and veteran actor Park Joong-hoon’s Top Star. King of Pigs director Yeon Sang-ho’s latest animation The Fake is featured. There are also exciting new projects that involve crowdfunding, human rights issues, and the debut of K-pop idol Lee Joon from MBLAQ in a lead role.

For the lowdown on all the films within the sub-category, please see below.

Synopsis: Abbi – or rather, Twisted Daddy – is a drama about a father whose dedication to his son becomes out of hand. Working hard to ensure his son can study law and become successful, the aging father risks everything.

Synopsis: Crowdfunding was sourced to produce this real life legal drama about a woman who contracts leukemia while working at a Samsung factory. The film follows the family’s efforts overcome the disease as well as the corporation responsible. 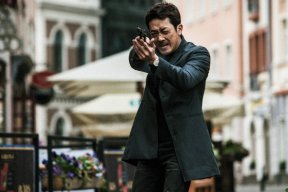 Synopsis: The Berlin File was a big hit upon release earlier his year. With an all-star cast including Ha Jeong-woo and Jeon Ji-hyeon, the action-thriller showcased director Ryoo’s style like never before. For the full review, please click here.

Synopsis: Following on from his hugely successful film King of Pigs, director Yeon Sang-ho employs his biting cultural critique stylisation to explore corrupted religious officials who are holding a small town to ransom. 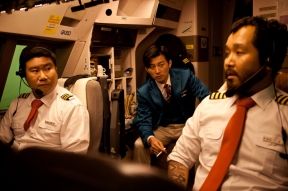 Synopsis: Lee Jang-ho was a prominent director during the 1970s and ’80s, and after an 18 year hiatus has re-entered filmmaking with God’s Eye View. The film explores a group of missionaries whose faith wanes after abduction by Islamic rebels.

Synopsis: Produced by the National Human Rights Commission, this omnibus film represents radically different stories about people living on the fringes of society, and the hardships they endure.

Synopsis: Moebius was marred by controversy before it was released.  Kim Ki-duk’s psychosexual thriller examines a family torn apart by adultery, penis dismemberment, and incest. 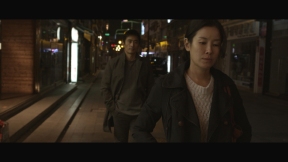 Synopsis: Town trilogy and The Weight director Jeon Kyu-hwan explores the life of an impulse disorder patient and his long-suffering family in My Boy. cultural attitudes towards mental health and the medical system are examined.

Synopsis: Sunhi is a film student who, wishing to continue her studies in America, seeks a recommendation letter from her professor. Yet in doing so, she unwittingly allows 3 different men attempt to advise her over her future.

Synopsis: A sequel of sorts to Rough Cut, Rough Play is concerned with a rising film star who becomes involved with gangsters, leading to a downward spiral. Based on an idea by Kim Ki-duk, the film features K-pop idol Lee Joon from MBLAQ in the lead role. 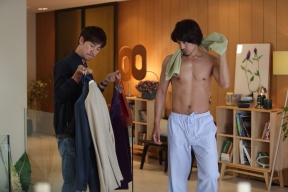 Synopsis: Veteran actor Park Joong-hoon makes his debut with Top Star, a film about a talent manager who suddenly becomes a superstar. Yet as his popularity increase, so does his arrogance and determination to stay at the top.

No stranger to controversy, director Kim Ki-duk’s latest film Moebius (뫼비우스) appears to be pushing more boundaries than ever before. Billed as his most controversial film to date, sexual thriller Moebius explores the themes of incest, genital dismemberment, and dark sado-masochistic desires within a family unit, employing the director’s trademark silent characterisation in emphasising the severity of their actions.

The story depicts a mother (Lee Eun-woo (이은우) who, sick of her husband’s (Jo Jae-hyeon (조재현) constant infidelities, plots her own unique brand of revenge. However the conflict dramatically backfires upon their son (Seo Yeong-joo (서영주), with the resulting shame forcing the mother into exile. While the father and son attempt to build their relationship once again, their lives are once again thrown into turmoil when the mother returns, sparking a dramatic chain of events towards an even darker path.

Perhaps unsurprisingly, Moebius was initially rejected by The Korean Media Rating Board upon submission, bestowing a ‘restricted’ rating upon the film. Yet as there are no cinemas in Korea that are licensed to screen ‘restricted’ rated films, the decision effectively meant that director Kim’s latest could not be released domestically. In a statement the Board explained, “The story and contents of the movie are highly violent, terrifying and harmful to underage audiences. The unethical and unsocial expressions of sexual activity between immediate family members make it only suitable for screening in limited theaters”. However, after director Kim edited several of the more controversial scenes from the film, Moebius was finally approved for domestic release, which should occur sometime in early September.

Interestingly such issues have not effected director Kim’s reputation abroad, as the film has been selected by both Venice and Toronto for their respective film festivals. Kim’s Pieta was the big winner at last year’s Venice Film Festival, scooping the highly coveted ‘Golden Lion’ award for best film, while this year’s Moebius will be screened as part of the ‘Out of Competition’ category. Toronto Film Festival are due to screen the film under their ‘Masters’ program, describing the film as bearing, “the clear mark of Kim’s singular genius. It’s a modern Greek tragedy bordering on psychological thriller, a pitchblack comedy, a crazy-weird depiction of pain-induced pleasure.”

Love him or loathe him, Kim Ki-duk’s films are consistently fascinating. Audiences will be able to form their own opinions regarding Moebius in early September. Please see below for the trailer.

For Korean cinema, 2019 was a year that saw the continuation of trends that have been readily apparent for the past several years - an increasing number of big blockbuster/commercially-orientated films with high production values, and the decreasing quality of creative, engaging, and memorable stories. That is not to say the talent has disappeared of... END_OF_DOCUMENT_TOKEN_TO_BE_REPLACED
2018 was quite a bizarre year for Korean cinema. The year began much like any other. The first few months of the year were typically dedicated to family-friendly fare. News of Korean films that were... END_OF_DOCUMENT_TOKEN_TO_BE_REPLACED
While the films released throughout any particular year are indicative of a country's identity, for Korean cinema in 2017 the exploration of political and social issues were especially revealing of the cultural shift that has... END_OF_DOCUMENT_TOKEN_TO_BE_REPLACED

Acclaimed actress Jeon Do-yeon is to be honoured at the 21st Bucheon International Fantastic Film Festival (BiFan) this year, in celebration of her 20 year career that began with Contact back in 1997. Entitled 'Contact, Jeon Do-yeon,' the special program is dedicated to the revered actress and will feature highlights from her incredible filmography, including Secret Sunshine... END_OF_DOCUMENT_TOKEN_TO_BE_REPLACED
Director Kim Jong-Kwan is well-known to fans of independent Korean cinema. A graduate of the Seoul Institute of the Arts, his short film How to Operate a Polaroid... END_OF_DOCUMENT_TOKEN_TO_BE_REPLACED
We are just one week away from the start of the 2nd Korea International Expat Film Festival (KIXFF).  Festival director Kevin Lambert took some time from his busy schedule to answer questions about the festival which... END_OF_DOCUMENT_TOKEN_TO_BE_REPLACED

Having a film selected to premiere at the Cannes Film Festival is an incredible achievement - having two is quite extraordinary. Yet that is precisely what director Hong Sang-soo has done, as The Day After (그 후) and Claire's Camera (클레어의 카메라) are due to be screened, with both films starring actress Kim Min-hee. Selected for the 'In Competition'... END_OF_DOCUMENT_TOKEN_TO_BE_REPLACED
The Villainess (악녀) has received an explosive trailer in the run-up to its debut at the Cannes Film Festival on May 21st. Appearing in the 'Out of Competition - Midnight Projections' program, writer/director Jung Byung-gil's latest... END_OF_DOCUMENT_TOKEN_TO_BE_REPLACED
Director Bong Joon-ho's Okja (옥자) is almost upon us. The highly anticipated science-fiction/drama is set to premiere In Competition at the Cannes Int. Film Festival on May 19th, before appearing on Korean cinema screens around June... END_OF_DOCUMENT_TOKEN_TO_BE_REPLACED
Join 143 other followers
Loading Comments...