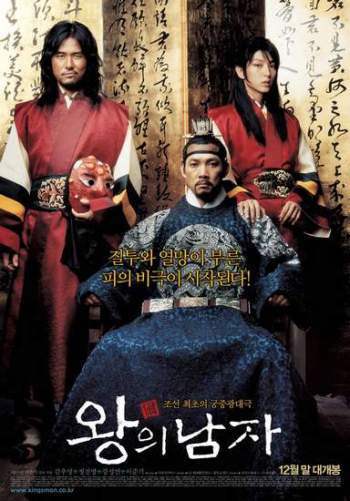 The King and the Clown (왕의 남자)

As a breathtaking romantic period-drama set during the Joseon dynasty, The King and the Clown is, perhaps unsurprisingly, one of the highest grossing films in Korean cinema history. However what may be surprising for some is that the romance is homosexual in nature, particularly in a culture where such relationships remain largely taboo. Yet despite such prejudice the film has not only garnered incredible critical praise and commercial success, but has also acted as something of a catalyst for a shift in ignorance largely thanks to androgynous actor Lee Joon-ki.

Two talented male minstrels – ruggedly masculine Jang-saeng (Kam Woo-seong (감우성) and delicately feminine Gong-gil (Lee Joon-ki (이준기) – are the leads in an acting troupe that perform for nobility in Joseon dynasty-era Korea. After the performances, Gong-gil is often forced into sexual slavery by their corrupt manager for extra money, sickening his partner. Unable to continue the de-humanising practice, the pair escape and depart for Seoul to earn their fortunes as performance artists and comedians in the capital city. Upon hearing of the cruel absurdities of the current ruler King Yeon-san (Jeong Jin-yeong (정진영), the duo join forces with other street performers to enact a comical tale ridiculing the King with the truths that others are too scared to tell. Their popularity is such that government officials take note, punishing them violently. However they are spared upon one condition – they must perform their mocking routine in front of the King himself, and, should he laugh, Jang-saeng and Gong-gil will be freed.

The King and the Clown – or more literally translated as ‘The King’s Man’ – is an incredibly poignant and captivating film and a wonderfully colourful historical tale. This is largely due to the partnership between the highly charismatic lead protagonists who never cease to be compelling, and an extremely well-balanced script by Choi Seok-hwan (최석환) who artfully plays with pacing to provide sensitive and thought provoking scenes throughout. Characterization is central to the success of the film, providing fully-rounded roles to individuals who could easily be stereotyped by continually emphasizing their emotional complexity. Jang-saeng is a gifted athlete and performer, with an over-powering compulsion to be truthful and to upset those in power through disrespect; Gong-gil is an equally talented artist who is as adept at acting as he is beautiful, aware that both features are a blessing and a curse; even King Yeon-san, who is often described in the annals of history as the most brutal and selfish ruler in the Joseon era, is portrayed as a psychologically damaged man through childhood torment and the pressures of court. In each case, the narrative allows the protagonists the time to convey their motivations – conscious or otherwise – while the actors that portray them fully inhabit their roles and are utterly convincing whenever they appear on screen.

The concept of truth-through-performance is masterfully conveyed, recalling the likes of Shakespeare’s Hamlet of the ‘play within a play’. As such the film operates as an insightful commentary of the era, depicting the obscurity of truth that is seemingly inherent with power as well as the corruption and tyranny of those in court, through traditional cultural forms. Due to this The King and the Clown expresses a grand, ‘epic’ quality, one which is unfortunately not capitalized on by director Lee Joon-ik. The director is highly competent throughout the film, featuring some wonderful set-pieces and intimate sequences, yet he falters in conveying the grandiose scale of Joseon and the palace in particular, with an establishing shot of Seoul the only notable exception. Despite such shortcomings director Lee Joon-ik is incredibly skilled at conveying intimacy and poignancy as he visualizes the cultural flair and exhibitions with passion and verve, in conjunction with the violence and intense distress that consistently follows. The director’s representation of the homosexual relationships within the film are cautious and understated yet rather than a criticism this actually infers a more innocent and a sweet natured love, although some factions of the audience may take issue with King Yeon-san’s dalliance with Gong-gil as the product of an unresolved Oedipal complex. 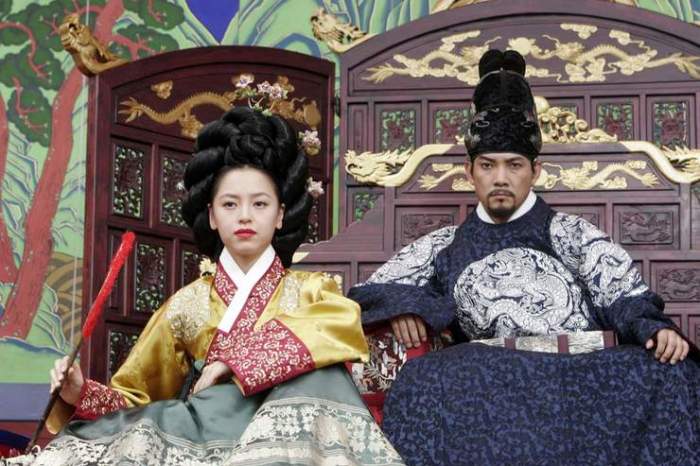 The vindictive King Yeon-san and his consort observe the performers

As comic performers Jang-saeng and Gong-gil, Kam Woo-seong and Lee Joon-ki are absolutely enthralling. Kam Woo-seong masterfully conveys the arrogance and audacity of the character, with his unbridled distain for those of a higher societal position palpable. The actor is wonderfully charismatic yet simultaneously tragic, traits that he exemplifies through every mannerism and facial expression with sincerity. Such a description also befits Lee Joon-ki who, as the androgynously beautiful Gong-gil, is a delight. He conveys femininity and elegance with startling conviction, with his resignation to fulfill his sexual role following the performances tender and heartbreaking. His character is as much a commentary about the manipulation of women as it is about homosexuals by those in power, and Lee Joon-ki does not disappoint in emphasizing the sheer injustice of societal inequality.

As the film’s other central protagonist, Jeong Jin-yeong is also frighteningly mesmerizing as King Yeon-san. The actor eloquently conveys the sadistically tragic nature of the ruler as he unpredictably switches emotions on a whim, portraying the leader as an underdeveloped adolescent in one breathe whilst in the next a violent and cruel man. As such Jeong Jin-yeong is fascinating to watch as the long hidden truths are revealed, for his reactions are unpredictably horrifying.

Through their performances Jang-saeng and Gong-gil reveal truths to King Yeon-san, which often incur violence

The King and the Clown is an amazing tale and a wonderful journey through one of the darkest eras of the Joseon dynasty. The narrative and characterization are excellent, as is the acting by all the principal cast who never cease to be enthralling and compelling. While the directing is somewhat lacking in scale the emphasis on intimacy and poignancy makes the film and enduring classic and a testament to the creative qualities of Korean filmmakers.

For Korean cinema, 2019 was a year that saw the continuation of trends that have been readily apparent for the past several years - an increasing number of big blockbuster/commercially-orientated films with high production values, and the decreasing quality of creative, engaging, and memorable stories. That is not to say the talent has disappeared of... END_OF_DOCUMENT_TOKEN_TO_BE_REPLACED
2018 was quite a bizarre year for Korean cinema. The year began much like any other. The first few months of the year were typically dedicated to family-friendly fare. News of Korean films that were... END_OF_DOCUMENT_TOKEN_TO_BE_REPLACED
While the films released throughout any particular year are indicative of a country's identity, for Korean cinema in 2017 the exploration of political and social issues were especially revealing of the cultural shift that has... END_OF_DOCUMENT_TOKEN_TO_BE_REPLACED

Acclaimed actress Jeon Do-yeon is to be honoured at the 21st Bucheon International Fantastic Film Festival (BiFan) this year, in celebration of her 20 year career that began with Contact back in 1997. Entitled 'Contact, Jeon Do-yeon,' the special program is dedicated to the revered actress and will feature highlights from her incredible filmography, including Secret Sunshine... END_OF_DOCUMENT_TOKEN_TO_BE_REPLACED
Director Kim Jong-Kwan is well-known to fans of independent Korean cinema. A graduate of the Seoul Institute of the Arts, his short film How to Operate a Polaroid... END_OF_DOCUMENT_TOKEN_TO_BE_REPLACED
We are just one week away from the start of the 2nd Korea International Expat Film Festival (KIXFF).  Festival director Kevin Lambert took some time from his busy schedule to answer questions about the festival which... END_OF_DOCUMENT_TOKEN_TO_BE_REPLACED

Having a film selected to premiere at the Cannes Film Festival is an incredible achievement - having two is quite extraordinary. Yet that is precisely what director Hong Sang-soo has done, as The Day After (그 후) and Claire's Camera (클레어의 카메라) are due to be screened, with both films starring actress Kim Min-hee. Selected for the 'In Competition'... END_OF_DOCUMENT_TOKEN_TO_BE_REPLACED
The Villainess (악녀) has received an explosive trailer in the run-up to its debut at the Cannes Film Festival on May 21st. Appearing in the 'Out of Competition - Midnight Projections' program, writer/director Jung Byung-gil's latest... END_OF_DOCUMENT_TOKEN_TO_BE_REPLACED
Director Bong Joon-ho's Okja (옥자) is almost upon us. The highly anticipated science-fiction/drama is set to premiere In Competition at the Cannes Int. Film Festival on May 19th, before appearing on Korean cinema screens around June... END_OF_DOCUMENT_TOKEN_TO_BE_REPLACED
Join 143 other followers
Loading Comments...