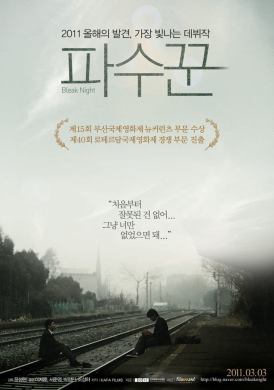 The younger generations, and their lifestyles, are generally not represented well in cinema. For every La Haine (1995) is an American Pie franchise; for every Kidulthood (2006) a season of 90210. Actors in their 20s and 30s portraying the formative teenage years in the bourgeoisie do well financially, due in no small part through the over-emphasis of sex, alcohol, drugs, and more sex. Despite the blatant lack of realism, the anxieties that so concern the younger generations are routinely dismissed in favor of cinematic hedonism.

Not so in Bleak Night (파수꾼), which depicts the trials and tribulations of three high school friends in a raw, independent manner that highlights their tumultuous lifestyles, and is without a doubt one of the best films of 2011. Even more astounding is that the film is the directorial debut of Yoon Sung-hyun (윤성현), fresh from film school and with his keen eye for realism and drama is clearly a filmmaker to watch.

Gi-tae (Lee Je-hoon (이제훈), Dong-yoon (Seo Joon-yeong (서준영) and Hee-joon (Park Jeong-min (박정민) are inseparable friends; when not together in high school, they can be found playing baseball on the abandoned rail tracks nearby, joking, swearing and occasionally smoking. In an effort to pair each other with a girlfriend, they arrange a trip to Wolmido amusement park with three girls, yet Hee-joon’s crush is unrequited as she likes Gi-tae instead. This simple jealous misunderstanding becomes the catalyst for disharmony amongst the group, escalating into bullying, fighting and the disintegration of friendship.

Bleak Night is a staggering achievement from first-time writer/director Yoon Sung-hyun, who conveys his protagonists and their environment with visionary skill. As the title suggests, the film is indeed bleak not only in a narrative sense but also technically as filters block any colour from entering the lives of the characters. Combined with the visual repetition of the high-rise apartment blocks and abandoned rail station, the bland and drab surroundings are more akin to a dystopian landscape than contemporary Seoul, forming a prison from which there is seemingly no escape.  The only time colour enters the film is during the group date at Wolmido amusement park, when Hee-joon’s hopes are dashed and the catalytic event that engulfs the friendship originates; when colour and passion are allowed to enter their lives, conveys the director, is the time when their vulnerabilities are revealed. The protagonists raw and uncontrollable emotion is wonderfully articulated through the camerawork, with the non-static hand-held prowess and close-ups conveying the uncomfortably intense situations that arise.

Yoon Sung-hyun also deserves praise for his editing skills, which are reminiscent of auteur Christopher Nolan in taking a fairly uncomplicated narrative and creating a non-linear, compelling viewing experience. The time displacement, while initially somewhat jarring, is edited extraordinarily well and makes somewhat predictable scenes enthralling as audiences are forced to wait for the ramifications – or the prelude – of dramatic encounters. For example, the reason for Hee-joon’s lack of interest in playing games with the class is unknown, as is the over-zealous insistence of Gi-tae for him to join; yet through the carefully edited framework, the events originating Hee-joon’s reluctance are portrayed, while later still is the resultant battle he must fight due to his lack of co-operation. The edited sequences are structured as if they were memories, as the friends recount the events that alienated them from each other; just as their memories are fragmented and non-linear, so too are the events portrayed.

Bullying and fighting develop between the friends

Lee Je-hoon won the 2011 32nd Blue Dragon Award for Best New Actor in his portrayal as Gi-tae, and it’s quite clear why. The young actor portrays the conflicted protagonist with incredible skill, with the ability to switch from happy and playful to intense and violent at will. His actions are motivated by his obsessive desire for attention and friendship, and his aggression when either fails is palpable. Lee Je-hoon’s eyes are perhaps his most his most vital asset, conveying sheer joy when playing games or sheer ferocity when being ignored. As Dong-yoon, Seo Joon-yeong was also nominated for the award of Best New Actor. Slightly relegated to the second and final acts, Seo Joon-yeong nevertheless gives a wonderful dramatic display as a student unable to halt the self-destruction of his friends. His turmoil when confronted with relationship problems with his friends and girlfriend are conveyed like a seasoned actor, forging empathy from audiences with his subtle and indecisive mannerisms. Park Jeong-min fairs less well, although that’s a rather unfair criticism given that his role is largely limited to the first act in which he must be aloof and ignorant as Hee-joon. Park Jeong-min expresses the immature jealousy of Hee-joon very well, refusing to acknowledge his emotions and instead projecting his anguish into pretentious defiance, furthering the ire of his counterparts. 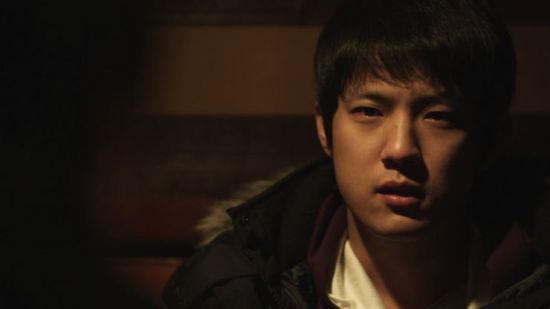 Dong-yoon must attempt to explain the disintegration of the group

Bleak Night would be considered an incredible achievement for a seasoned director, but for first-time writer/director/editor Yoon Sung-hyun it is a monumental and career forging film. His creative and technical prowess, combined with three young and talented actors, have earned Bleak Night the Best New Director and Best New Actor awards domestically, while the film has been invited to several high profile international festivals. Bleak Night is proof that an enormous budget and renowned stars are not necessary in creating a compelling and thought-provoking drama, and is highly, highly, recommended.

For Korean cinema, 2019 was a year that saw the continuation of trends that have been readily apparent for the past several years - an increasing number of big blockbuster/commercially-orientated films with high production values, and the decreasing quality of creative, engaging, and memorable stories. That is not to say the talent has disappeared of... END_OF_DOCUMENT_TOKEN_TO_BE_REPLACED
2018 was quite a bizarre year for Korean cinema. The year began much like any other. The first few months of the year were typically dedicated to family-friendly fare. News of Korean films that were... END_OF_DOCUMENT_TOKEN_TO_BE_REPLACED
While the films released throughout any particular year are indicative of a country's identity, for Korean cinema in 2017 the exploration of political and social issues were especially revealing of the cultural shift that has... END_OF_DOCUMENT_TOKEN_TO_BE_REPLACED

Acclaimed actress Jeon Do-yeon is to be honoured at the 21st Bucheon International Fantastic Film Festival (BiFan) this year, in celebration of her 20 year career that began with Contact back in 1997. Entitled 'Contact, Jeon Do-yeon,' the special program is dedicated to the revered actress and will feature highlights from her incredible filmography, including Secret Sunshine... END_OF_DOCUMENT_TOKEN_TO_BE_REPLACED
Director Kim Jong-Kwan is well-known to fans of independent Korean cinema. A graduate of the Seoul Institute of the Arts, his short film How to Operate a Polaroid... END_OF_DOCUMENT_TOKEN_TO_BE_REPLACED
We are just one week away from the start of the 2nd Korea International Expat Film Festival (KIXFF).  Festival director Kevin Lambert took some time from his busy schedule to answer questions about the festival which... END_OF_DOCUMENT_TOKEN_TO_BE_REPLACED

Having a film selected to premiere at the Cannes Film Festival is an incredible achievement - having two is quite extraordinary. Yet that is precisely what director Hong Sang-soo has done, as The Day After (그 후) and Claire's Camera (클레어의 카메라) are due to be screened, with both films starring actress Kim Min-hee. Selected for the 'In Competition'... END_OF_DOCUMENT_TOKEN_TO_BE_REPLACED
The Villainess (악녀) has received an explosive trailer in the run-up to its debut at the Cannes Film Festival on May 21st. Appearing in the 'Out of Competition - Midnight Projections' program, writer/director Jung Byung-gil's latest... END_OF_DOCUMENT_TOKEN_TO_BE_REPLACED
Director Bong Joon-ho's Okja (옥자) is almost upon us. The highly anticipated science-fiction/drama is set to premiere In Competition at the Cannes Int. Film Festival on May 19th, before appearing on Korean cinema screens around June... END_OF_DOCUMENT_TOKEN_TO_BE_REPLACED