The first in a series of quick-fire reviews from the 15th Seoul Women’s Film Festival, 2013:

You Are More Than Beautiful (그녀의 연기)

Director Kim Tae-yong’s (김태용) You Are More Than Beautiful is a wonderfully charismatic short film, due wholly to the performance of Gong Hyo-jin (공효진). The story involves Jeju Islander – and singleton – Cheol-su, who returns to the island upon hearing that his elderly father is seriously ill. To ease his father’s suffering Cheol-su hires actress Young-hee (Gong) to play the role of his fiancee, so that he may leave this world without worrying about his son. While it certainly sounds like weighty subject matter, Gong’s charisma and grace elevate the film into a heartfelt comedy-drama as her playful personality turns all forms of negativity into keen optimism. Indeed, her rendition of traditional Korean opera is poignantly moving and uplifting, emphasising her caliber as an actress.  As one of the few directors in contemporary Korea cinema featuring women in prominent roles, Kim Tae-yong does incredibly well in simply allowing Gong to act, while his vision captures the Jeju scenery beautifully. A lovely short film.

Having already seen My Place at the Jeonju International Film Festival, could director Park Moon-chil’s (박문칠) documentary have the same resonance on a repeated viewing? Absolutely. Experiencing director Park’s evolving perspective on his family is consistently compelling and entertaining, as he changes from a man worried about his sister’s out-of-wedlock pregnancy to a man who comes to admire her strength of character. The personal family trauma that he places on screen is sincere and poignant, and director Park never shies away from the more difficult – and defining – periods from their history. He balances the representation of each family member incredibly well, simultaneously caring yet objective, allowing for each person to openly convey their psychology. An excellent documentary about family hardship and the desire to set things right. 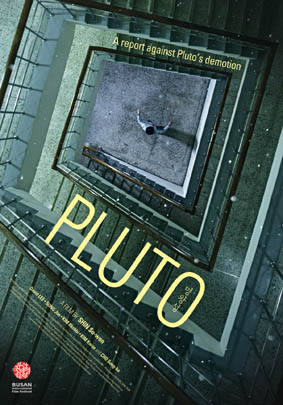 Pluto is, quite simply, an excellent film. Director Shin Su-won’s (신수원) second feature length film is a brilliant exploration of the enormous pressure students experience within the Korean education system, and how the competitive nature to join a prestigious university forges a psychologically unbalanced generation. Director Shin’s vision shines throughout with some truly wonderful shots and compositions, articulating the fragile mental states of the protagonists by featuring superb use of the mise-en-scene. Some critics took issue with manner in which the film changes tone from high school drama to cop thriller, yet while the point is valid the evolving aesthetics and conventions do nothing to dampen the power of the story. In fact in doing so, the potency of the drama is elevated as adult institutions are held accountable, while the inclusion of thriller conventions should guarantee a more mainstream appeal. A powerful drama with an important social message, Pluto is certainly one of the best films of the year and it will very interesting to see audience reaction when it’s released nationwide in July.

For Korean cinema, 2019 was a year that saw the continuation of trends that have been readily apparent for the past several years - an increasing number of big blockbuster/commercially-orientated films with high production values, and the decreasing quality of creative, engaging, and memorable stories. That is not to say the talent has disappeared of... END_OF_DOCUMENT_TOKEN_TO_BE_REPLACED
2018 was quite a bizarre year for Korean cinema. The year began much like any other. The first few months of the year were typically dedicated to family-friendly fare. News of Korean films that were... END_OF_DOCUMENT_TOKEN_TO_BE_REPLACED
While the films released throughout any particular year are indicative of a country's identity, for Korean cinema in 2017 the exploration of political and social issues were especially revealing of the cultural shift that has... END_OF_DOCUMENT_TOKEN_TO_BE_REPLACED

Acclaimed actress Jeon Do-yeon is to be honoured at the 21st Bucheon International Fantastic Film Festival (BiFan) this year, in celebration of her 20 year career that began with Contact back in 1997. Entitled 'Contact, Jeon Do-yeon,' the special program is dedicated to the revered actress and will feature highlights from her incredible filmography, including Secret Sunshine... END_OF_DOCUMENT_TOKEN_TO_BE_REPLACED
Director Kim Jong-Kwan is well-known to fans of independent Korean cinema. A graduate of the Seoul Institute of the Arts, his short film How to Operate a Polaroid... END_OF_DOCUMENT_TOKEN_TO_BE_REPLACED
We are just one week away from the start of the 2nd Korea International Expat Film Festival (KIXFF).  Festival director Kevin Lambert took some time from his busy schedule to answer questions about the festival which... END_OF_DOCUMENT_TOKEN_TO_BE_REPLACED

Having a film selected to premiere at the Cannes Film Festival is an incredible achievement - having two is quite extraordinary. Yet that is precisely what director Hong Sang-soo has done, as The Day After (그 후) and Claire's Camera (클레어의 카메라) are due to be screened, with both films starring actress Kim Min-hee. Selected for the 'In Competition'... END_OF_DOCUMENT_TOKEN_TO_BE_REPLACED
The Villainess (악녀) has received an explosive trailer in the run-up to its debut at the Cannes Film Festival on May 21st. Appearing in the 'Out of Competition - Midnight Projections' program, writer/director Jung Byung-gil's latest... END_OF_DOCUMENT_TOKEN_TO_BE_REPLACED
Director Bong Joon-ho's Okja (옥자) is almost upon us. The highly anticipated science-fiction/drama is set to premiere In Competition at the Cannes Int. Film Festival on May 19th, before appearing on Korean cinema screens around June... END_OF_DOCUMENT_TOKEN_TO_BE_REPLACED