Truth is, as the saying goes, stranger than fiction. Perhaps the cliche is best served when applied to the criminal classes, as events that would seemingly belong in the pages of Sir Arthur Conan Doyle or the films of Martin Scorcese are violently brought into ‘the real’, adding an incomparable shock value with the knowledge that criminal empires were actually built, and that victims genuinely suffered. More specifically, the notion of the serial killer has endeared itself amongst fans of the crime genre for the thrilling cat-and-mouse games played by the detective and murderer, but more so in attempting to piece together the depraved psychosis of the unhinged individual before another innocent succumbs to such unbalanced desires.

Memories of Murder (살인의 추억), director Bong Joon-ho’s (봉준호) incredible second film, is based on the true story of Korea’s first known serial killer who raped and murdered ten women between 1986 and 1991 – a case that is still unresolved. Memories of Murder is one of the most successful and prolific films to emerge from Korea and rightfully so, with superb direction from one of the country’s leading auteurs and an exceptional performance from lead actor Song Kang-ho (송강호).

In a small rural town surrounded by farmland, the naked and bound body of a young woman is found in an irrigation tunnel. Detective Park Doo-man (Song Kang-ho) is called to the scene, but all traces of evidence have been destroyed by the locals. Shortly thereafter, the body of another young woman is found, raped and murdered in the same fashion. With no leads, Doo-man and his aggressive partner Detective Cho Yong-koo (Kim Roi-ha (김뢰하) are tasked with finding the culprit, beating and torturing any suspects who visually conform to their idea of a serial killer. Their theories and methods of interrogation are rejected by intellectual Seoulite Detective Seo Tae-Yoon (Kim Sang-kyeong (김상경) who joins the search, but as the three detectives squabble and desperately cling to the loosest of hunches, and with the government too busy quelling the various uprisings throughout the country, the number of murdered young women continues to rise. 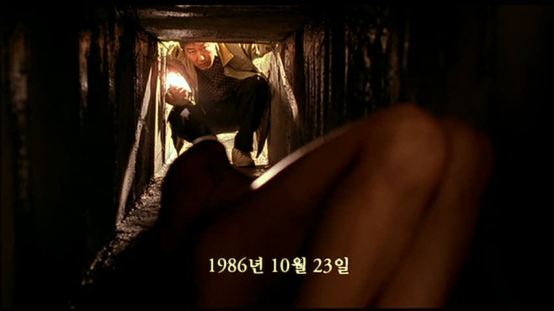 There is a tendency with crime-thrillers to reveal the bloodied and mutilated corpses of the victims for shock value, a tendency from which Bong Joon-ho wisely refrains and instead allows the horrifying true story to be at the forefront of the film. His vision in presenting the narrative is enthralling as he simultaneously conveys beauty and the macabre seamlessly – when Detective Park Doo-man visits the broad, expansive golden farmland in the initial establishing shot, mere moments later he is confronted with a corpse in a darkened, claustrophobic tunnel. The interplay between such oppositions, which have marked Bong Joon-ho as an auteur, continually explore the duality of the situation as light conflicts with darkness, the truth struggles against the veneer, and the lines between morality and immorality are blurred. As such, Memories of Murder contains some incredibly dark humour, such as the ramifications in fabricating evidence and the bizarre perversity that is unlocked in certain members of the populace when news of the murders spreads, adding a comedic edge that stops the film from becoming bleak but also conveys the turmoil and frustrations in attempting to catch a serial killer.

In addition to his interest in duality, Bong Joon-ho’s recurrent social exploration is rather blatantly laid bare and few are portrayed positively. The military government is too busy extinguishing public protests to provide resources; the public are too ignorant to understand they are destroying evidence; media outlets compound the situation further; and men are chauvinistic and sexist. By far the most damning indictments are reserved for the police force, as corruption and violence are commonplace. Detectives Park Doo-man and Cho Yong-koo have received very little education and their logic-defying hunches are simultaneously comedic yet disturbing, as Doo-man rehearses confessional speeches with suspects after Yong-koo has tortured them into submission. Both men humiliate the police force and make them a national embarrassment with their actions, as Bong Joon-ho initially portrays them as simpletons in need of a scapegoat. Intellectual detective Seo Tae-yoon fairs much better having received an education and training in Seoul, yet even he succumbs to the moral abyss due to the frustration with his peers and the lack of resources at his disposal. Bong Joon-ho creates a powerfully damning portrait of the era, yet the dark humour and the often unbelievably surreal events that transpire make the protagonists somehow likable as they themselves are attempt to create order within a society in chaos.

Song Kang-ho, as Detective Park Doo-man, is superb and utterly deserving of his Grand Bell Best Actor Award for the role. Park Doo-man is a bullying fraudster, a corrupt tyrant, yet amazingly is a compelling and charismatic protagonist. His rudimentary upbringing and attitude convey him as an underdog who routinely makes mistakes, and as such resorts to fabricating evidence regardless. Yet when his actions bring the police into disrepute, Doo-man’s evolution is incredible as he begins to emulate Detective Seo-Tae-yoon and commit to serious police work, making Memories of Murder as much about his maturation as about finding the serial killer.

Detective Cho Yong-koo is ultimately a proletariat figure with a penchant for violence, and Kim Roi-ha performs the role well. Bong Joon-ho uses the protagonist of Yong-koo to express the base dissatisfaction with the institution, and as such is more akin to a criminal as he abuses suspects, drinks alcohol, fights with locals, and more importantly sexually assaults a girl in a karaoke room – right next to his oblivious fellow officers.

Kim Sang-kyeong also conveys a highly competent performance as pretentious Seoulite Detective Seo Tae-yoon. As his modern style of police work inspires Park Doo-man, the corruption conversely leads to the devolution of Tae-yoon as his frustrations engulf his sense of reason. Yet while Doo-man’s character arc is compelling, Tae-yoon’s is less so due to his reserved and conceited portrayal. 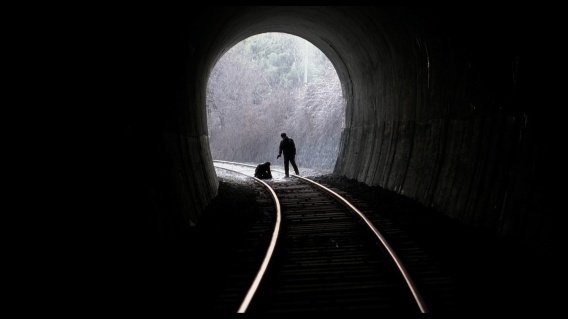 Memories of Murder is a fantastic example of a crime-thriller that does not rely on gore in producing an enthralling film about serial murders. While artistic license has undoubtedly been applied in certain areas, the fact it is based on a real-life unresolved case provides authenticity and a mixture of genuine fascination and horror that such events could transpire in recent history. As such it justifiably deserves its status as being not only one of the most prolific films to originate from Korea, but also in cementing Bong Joon-ho’s reputation as a respected auteur, making Memories of Murder one of the most noteworthy examples of the genre.

For Korean cinema, 2019 was a year that saw the continuation of trends that have been readily apparent for the past several years - an increasing number of big blockbuster/commercially-orientated films with high production values, and the decreasing quality of creative, engaging, and memorable stories. That is not to say the talent has disappeared of... END_OF_DOCUMENT_TOKEN_TO_BE_REPLACED
2018 was quite a bizarre year for Korean cinema. The year began much like any other. The first few months of the year were typically dedicated to family-friendly fare. News of Korean films that were... END_OF_DOCUMENT_TOKEN_TO_BE_REPLACED
While the films released throughout any particular year are indicative of a country's identity, for Korean cinema in 2017 the exploration of political and social issues were especially revealing of the cultural shift that has... END_OF_DOCUMENT_TOKEN_TO_BE_REPLACED

Acclaimed actress Jeon Do-yeon is to be honoured at the 21st Bucheon International Fantastic Film Festival (BiFan) this year, in celebration of her 20 year career that began with Contact back in 1997. Entitled 'Contact, Jeon Do-yeon,' the special program is dedicated to the revered actress and will feature highlights from her incredible filmography, including Secret Sunshine... END_OF_DOCUMENT_TOKEN_TO_BE_REPLACED
Director Kim Jong-Kwan is well-known to fans of independent Korean cinema. A graduate of the Seoul Institute of the Arts, his short film How to Operate a Polaroid... END_OF_DOCUMENT_TOKEN_TO_BE_REPLACED
We are just one week away from the start of the 2nd Korea International Expat Film Festival (KIXFF).  Festival director Kevin Lambert took some time from his busy schedule to answer questions about the festival which... END_OF_DOCUMENT_TOKEN_TO_BE_REPLACED

Having a film selected to premiere at the Cannes Film Festival is an incredible achievement - having two is quite extraordinary. Yet that is precisely what director Hong Sang-soo has done, as The Day After (그 후) and Claire's Camera (클레어의 카메라) are due to be screened, with both films starring actress Kim Min-hee. Selected for the 'In Competition'... END_OF_DOCUMENT_TOKEN_TO_BE_REPLACED
The Villainess (악녀) has received an explosive trailer in the run-up to its debut at the Cannes Film Festival on May 21st. Appearing in the 'Out of Competition - Midnight Projections' program, writer/director Jung Byung-gil's latest... END_OF_DOCUMENT_TOKEN_TO_BE_REPLACED
Director Bong Joon-ho's Okja (옥자) is almost upon us. The highly anticipated science-fiction/drama is set to premiere In Competition at the Cannes Int. Film Festival on May 19th, before appearing on Korean cinema screens around June... END_OF_DOCUMENT_TOKEN_TO_BE_REPLACED
Join 143 other followers
Loading Comments...