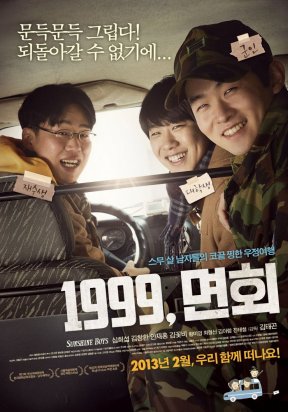 Debuting at the 2012 Busan International Film Festival, and invited to the 2013 Rotterdam International Film Festival for its international premiere, independent drama Sunshine Boys (1999, 면회) has already garnered noteworthy attention and acclaim. Helmed by director Kim Tae-gon (김태곤), the story follows Sang-won (상원, Shim Hee-seop (심희섭) and Seung-joon (승준, Ahn Jae-hong (안재홍) as they embark on a road trip to visit pal Min-wook (민욱, Kim Chang-hwan (김창환), who is currently serving  mandatory military service in Busan. As the three reunite for the first time since high school, they discover that events have changed them into quite different people than they remember. Learning about each other once more, the friends meet pretty tea house worker Mi-yeon (미연, Kim Kkobbi (김꽃비) and the night unfolds in a different way than they planned.

The students begin their road trip full of optimism

Director Kim Tae-gon, who also co-wrote the screenplay with Jeon Go-woon, employs a social-realist aesthetic throughout the film that makes the encounters full of genuine tension and irony-fueled exchanges. The awkwardness between Sang-won and Seung-joon as they drive together is a mixture of comical and poignant as they attempt to rediscover each other, yet can only use their past as a basis. Similarly when Min-wook is reprimanded by a superior officer only slightly older than him, the results are uncomfortable yet humorous in the attempt to assert dominate masculinity amongst young men. Throughout, the director also employs filters that drain the color from the images, creating a bleak atmosphere that connotes the stage in which the threesome find themselves; victims of the Asian financial crisis of the late ’90s, all three friends are attempting to cope with their current situations that stand in stark contrast to the bright future promised from their days in high school.

Sang-won, Min-wook and Seung-joon learn about each other once again

As the emphasis is squarely placed on realism, it takes quite some time for the narrative to get moving, and for much of the opening Sunshine Boys is filled with awkward character moments rather than impetus. A catalyst does however arrive in the form of a letter from Min-wook’s girlfriend Esther stating her desire to break up, and who has charged Seung-joon with its delivery. Initially outraged, Sang-won and Seung-joon continually debate on whether they should hand over the letter and much of the story revolves around their indecision. Yet the film is very much Sang-won’s story as a shy and moderately gloomy university student who is forever changed by the events of the trip. The sullen young man hints at his problems without stating them outright, resulting in an often unemotional central protagonist but one that is easily relatable.

The real test for Sang-won arrives in the form of pretty tea house worker Mi-yeon, who invites him and his pals for a drink at her workplace. Director Kim Tae-gon does a great job of making the establishment foreboding with great use of lighting, isolating the tea house as disreputable, emphasizing the naivety of the young men who enter despite the warning signs. As they drink alcohol the protagonists loosen and they start to reveal more about their issues, granting greater insight into their insecurities and motivations. Yet it is Mi-yeon,wonderfully performed by Kim Kkobbi, that steals the limelight within Sunshine Boys as it is her character that provides compulsion for all involved with her suggestive smiles, probing questions and provocative body language. Mi-yeon is an intriguing character who is simultaneously innocent yet worldly-wise, attractive yet dangerous, and it is largely due to her that the film is so compelling. 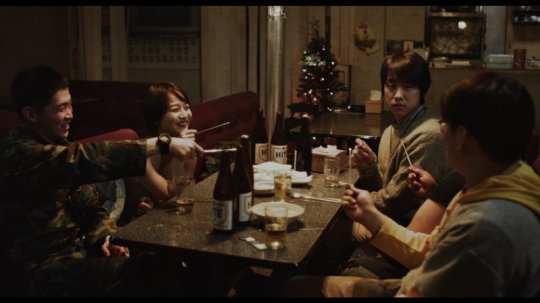 Sunshine Boys (1999, 면회) is a highly interesting independent drama about three friends attempting to discover each other once again, after their lives have taken unexpected courses. Director Kim Tae-gon does a great job in featuring awkward, ironic moments in the lives of young men, which are granted extra potency with the application of social-realist aesthetics and drained color palette. The story does however take a very long time in establishing itself and as such the general sense of impetus suffers. Yet the wonderfully understated performance by Kim Kkobbi as Mi-yeon puts Sunshine Boys back on track, making the film an interesting journey of maturation.

For Korean cinema, 2019 was a year that saw the continuation of trends that have been readily apparent for the past several years - an increasing number of big blockbuster/commercially-orientated films with high production values, and the decreasing quality of creative, engaging, and memorable stories. That is not to say the talent has disappeared of... END_OF_DOCUMENT_TOKEN_TO_BE_REPLACED
2018 was quite a bizarre year for Korean cinema. The year began much like any other. The first few months of the year were typically dedicated to family-friendly fare. News of Korean films that were... END_OF_DOCUMENT_TOKEN_TO_BE_REPLACED
While the films released throughout any particular year are indicative of a country's identity, for Korean cinema in 2017 the exploration of political and social issues were especially revealing of the cultural shift that has... END_OF_DOCUMENT_TOKEN_TO_BE_REPLACED

Acclaimed actress Jeon Do-yeon is to be honoured at the 21st Bucheon International Fantastic Film Festival (BiFan) this year, in celebration of her 20 year career that began with Contact back in 1997. Entitled 'Contact, Jeon Do-yeon,' the special program is dedicated to the revered actress and will feature highlights from her incredible filmography, including Secret Sunshine... END_OF_DOCUMENT_TOKEN_TO_BE_REPLACED
Director Kim Jong-Kwan is well-known to fans of independent Korean cinema. A graduate of the Seoul Institute of the Arts, his short film How to Operate a Polaroid... END_OF_DOCUMENT_TOKEN_TO_BE_REPLACED
We are just one week away from the start of the 2nd Korea International Expat Film Festival (KIXFF).  Festival director Kevin Lambert took some time from his busy schedule to answer questions about the festival which... END_OF_DOCUMENT_TOKEN_TO_BE_REPLACED

Having a film selected to premiere at the Cannes Film Festival is an incredible achievement - having two is quite extraordinary. Yet that is precisely what director Hong Sang-soo has done, as The Day After (그 후) and Claire's Camera (클레어의 카메라) are due to be screened, with both films starring actress Kim Min-hee. Selected for the 'In Competition'... END_OF_DOCUMENT_TOKEN_TO_BE_REPLACED
The Villainess (악녀) has received an explosive trailer in the run-up to its debut at the Cannes Film Festival on May 21st. Appearing in the 'Out of Competition - Midnight Projections' program, writer/director Jung Byung-gil's latest... END_OF_DOCUMENT_TOKEN_TO_BE_REPLACED
Director Bong Joon-ho's Okja (옥자) is almost upon us. The highly anticipated science-fiction/drama is set to premiere In Competition at the Cannes Int. Film Festival on May 19th, before appearing on Korean cinema screens around June... END_OF_DOCUMENT_TOKEN_TO_BE_REPLACED
Join 143 other followers