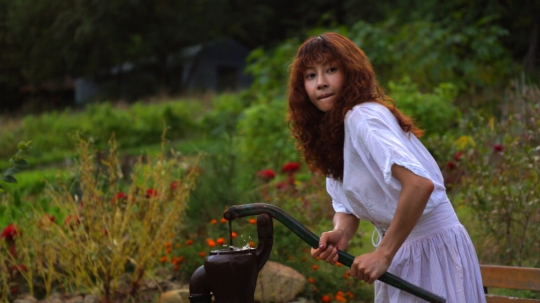 When highly-conservative philosophy professor Yoon (Jo Han-cheol (조한철) suffers a stroke due to overwork and stress, his wife does the best she can to nurse him back to health. Yet when she cannot cope any longer, she enlists the help of quirky caregiver Sookhee (Chae Min-seo (채민서), whose patients all seem to remarkably recover. Sookhee, however, is more than she seems and her techniques vary from kind and sweet to threatening and sexual.

Imagine Mary Poppins as a sexually charged sociopath who take care of conservative, misogynistic stroke sufferers. That is quite possibly the most apt description of Sookhee (숙희), a bizarre film with a huge identity crisis and a large undercurrent of meanness. The mish-mash of an array of generic conventions, as well as Sookhee’s constantly schizophrenic characterisation, make the story an incredibly surreal experience. Writer/director Yang Ji-eun (양지은) doesn’t appear to be sure what kind of film she wants to helm, as the narrative – and characters – veer in all directions without really exploring any. Ironically this is both compelling as well as frustrating, as the odd machinations consistently surprise. Yet beneath all the bizarre goings-on is an ordinate amount of unwarranted, appalling misogyny. Masculine fantasies frequently arise and typically instigate violence. Throughout the film Sookhee is routinely beaten and sexually assaulted by the men in her life adding an acutely nasty dimension to an otherwise jovial film, which is all the more surprising given that director Yang is one of the few female filmmakers presenting her work at JIFF 2014. Sookhee perpetuates the archaic ideology that free-spirited women need to be tamed and dominated by violence and sex.

Sookhee is the victim of an inordinate amount of misogyny

What director Yang does well lies in her use of colour. Scenes featuring Sookhee are beautifully vibrant and sumptuous, often featured in the countryside far from the realm of men, conveying her liberation from patriarchy alongside pagan, or wiccan, sensibilities. Professor Yoon, in contrast, is located within an absence of colour. The washed-out palette wonderfully conveys his conservatism and strict adherence to the rules of men, bolstered by the repetition of academic and religious iconography. As Sookhee enters Yoon’s world and ‘educates’ him through her odd mix of fear and sexual liberation, his world gradually becomes more colourful as he heals. Yet therein also lies problems, as Yoon’s trajectory is more of a vapid devolution than one of enlightenment. Director Yang is attempting to explore Oedipal issues and gender roles through Sookhee’s maternal and Yoon’s infantile roles, and by reversing old-fashioned patriarchal positions of power and sex. However the message is lost beneath the deluge of oddities and mean-spirited misogyny, alongside the unintentionally humourous overacting.

Sookhee’s former patients seek to ‘tame’ her through sexual violence

Sookhee (숙희) is a peculiar film about a free-spirited caregiver who helps stroke sufferers through a bizarre mix of fear and sex. The tone and themes within the surreal film spiral wildly throughout, creating a huge identity crisis from beginning to end while the undercurrent of needless misogyny casts a dark shadow over proceedings. Writer/director Yang Ji-eun (양지은) does well in employing colour to convey the sensibilities of the two central protagonists, yet the messages regarding reversal of patriarchal relationship and sexual roles are subsumed beneath utter oddity and meanness.

For Korean cinema, 2019 was a year that saw the continuation of trends that have been readily apparent for the past several years - an increasing number of big blockbuster/commercially-orientated films with high production values, and the decreasing quality of creative, engaging, and memorable stories. That is not to say the talent has disappeared of... END_OF_DOCUMENT_TOKEN_TO_BE_REPLACED
2018 was quite a bizarre year for Korean cinema. The year began much like any other. The first few months of the year were typically dedicated to family-friendly fare. News of Korean films that were... END_OF_DOCUMENT_TOKEN_TO_BE_REPLACED
While the films released throughout any particular year are indicative of a country's identity, for Korean cinema in 2017 the exploration of political and social issues were especially revealing of the cultural shift that has... END_OF_DOCUMENT_TOKEN_TO_BE_REPLACED

Acclaimed actress Jeon Do-yeon is to be honoured at the 21st Bucheon International Fantastic Film Festival (BiFan) this year, in celebration of her 20 year career that began with Contact back in 1997. Entitled 'Contact, Jeon Do-yeon,' the special program is dedicated to the revered actress and will feature highlights from her incredible filmography, including Secret Sunshine... END_OF_DOCUMENT_TOKEN_TO_BE_REPLACED
Director Kim Jong-Kwan is well-known to fans of independent Korean cinema. A graduate of the Seoul Institute of the Arts, his short film How to Operate a Polaroid... END_OF_DOCUMENT_TOKEN_TO_BE_REPLACED
We are just one week away from the start of the 2nd Korea International Expat Film Festival (KIXFF).  Festival director Kevin Lambert took some time from his busy schedule to answer questions about the festival which... END_OF_DOCUMENT_TOKEN_TO_BE_REPLACED

Having a film selected to premiere at the Cannes Film Festival is an incredible achievement - having two is quite extraordinary. Yet that is precisely what director Hong Sang-soo has done, as The Day After (그 후) and Claire's Camera (클레어의 카메라) are due to be screened, with both films starring actress Kim Min-hee. Selected for the 'In Competition'... END_OF_DOCUMENT_TOKEN_TO_BE_REPLACED
The Villainess (악녀) has received an explosive trailer in the run-up to its debut at the Cannes Film Festival on May 21st. Appearing in the 'Out of Competition - Midnight Projections' program, writer/director Jung Byung-gil's latest... END_OF_DOCUMENT_TOKEN_TO_BE_REPLACED
Director Bong Joon-ho's Okja (옥자) is almost upon us. The highly anticipated science-fiction/drama is set to premiere In Competition at the Cannes Int. Film Festival on May 19th, before appearing on Korean cinema screens around June... END_OF_DOCUMENT_TOKEN_TO_BE_REPLACED