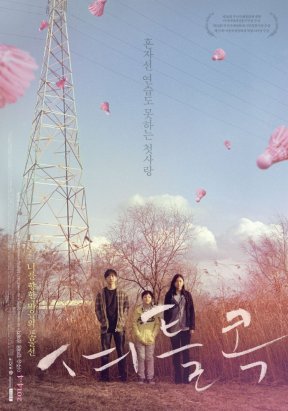 When their parents die in a tragic accident, Eun-joo (Gong Ye-ji (공예지) and her half brother Min-jae (Lee Ju-seung (이주승) are given an enormous life insurance settlement. Perhaps unsurprisingly as young adults, they quickly burn through the money as they live luxuriously and purchase without considering the consequences. When Eun-joo abruptly disappears with the remainder of the money, Min-jae makes it his mission to track her down and reclaim what’s his. With a lead on her whereabouts Min-jae sets off from Seoul to the south coast, not realising that step-brother Eun-ho (Kim Tae-yong (김태용) has stowed away on the back seat.

Angry and frustrated, Min-jae has strong motivation to track his sister

Shuttlecock (셔틀콕) is an interesting amalgamation of genres, combining the road movie with a coming-of-age social drama. The film is an impressive debut by director Lee Yu-bin (이유빈), who uses the conventions to keenly explore issues of parental responsibility, and its importance in defining and shaping youth during their formative years. Min-jae, for example, is initially a despicable character as he lies and cheats his way to get what he wants, a wayward youth without guidance or direction. His attitude is particularly awful in regards to his stowaway half-brother Eun-ho whom he treats terribly, poking fun at his bed-wetting and abandoning the young boy in the countryside. Yet as they travel together through Korea their bond is strengthened, not as brothers but as makeshift father and son and figures. Their relationship develops naturally and sincerely, with their evolution easily the highlight of the film.

Min-jae’s characterisation however is one of the central flaws of the film, as he is so deeply unlikeable that it is difficult to care about the journey he is on, not to mention whether he can succeed in finding his wayward sister. In order for him to change and grow Min-jae of course must begin as reprehensible, but he is so detestable he’s very difficult to empathise with. While Eun-joo’s motives for abandoning her brothers are elusive, Min-jae is so mean that it’s entirely feasible she did the right thing. In order for Min-jae to become a responsible adult, director Lee constructs some subtle and nuanced moments that delve into his psychology. Unfortunately however there are simply not enough events such as these, ironically even with an overly long running time of around 108 minutes, and the story often meanders whether in a city or on the road.

As well as notions of family, Shuttlecock also presents an interesting debate in regards to the younger generation’s attitude towards money, sex and responsibility, key issues in contemporary Korean culture. The siblings genuinely act like they are invulnerable upon receiving the payout, and have little concern for consequences, something the siblings must ultimately acknowledge when they are finally reunited. As such ‘shuttlecock’ is a wonderfully metaphorical title that conveys their constant up and down trajectory, adding a poetic sensibility to their tumultuous lives.

The brohers are in search of Eun-joo but the question remains – why did she run?

Shuttlecock (셔틀콕) is an interesting examination of contemporary Korean youth, their attitude towards money, and how they are shaped during their formative years by (lack of) parental guidance. The film is an impressive debut by director Lee Yu-bin (이유빈), who competently employs the conventions of the road movie combined with a coming-of-age social drama in which to explore her characters. However, with a deeply unlikeable central protagonist, and an often meandering story within the overly long running time, Shuttlecock is an intriguing drama that depicts social issues rather than exploring them thoroughly.

For Korean cinema, 2019 was a year that saw the continuation of trends that have been readily apparent for the past several years - an increasing number of big blockbuster/commercially-orientated films with high production values, and the decreasing quality of creative, engaging, and memorable stories. That is not to say the talent has disappeared of... END_OF_DOCUMENT_TOKEN_TO_BE_REPLACED
2018 was quite a bizarre year for Korean cinema. The year began much like any other. The first few months of the year were typically dedicated to family-friendly fare. News of Korean films that were... END_OF_DOCUMENT_TOKEN_TO_BE_REPLACED
While the films released throughout any particular year are indicative of a country's identity, for Korean cinema in 2017 the exploration of political and social issues were especially revealing of the cultural shift that has... END_OF_DOCUMENT_TOKEN_TO_BE_REPLACED

Acclaimed actress Jeon Do-yeon is to be honoured at the 21st Bucheon International Fantastic Film Festival (BiFan) this year, in celebration of her 20 year career that began with Contact back in 1997. Entitled 'Contact, Jeon Do-yeon,' the special program is dedicated to the revered actress and will feature highlights from her incredible filmography, including Secret Sunshine... END_OF_DOCUMENT_TOKEN_TO_BE_REPLACED
Director Kim Jong-Kwan is well-known to fans of independent Korean cinema. A graduate of the Seoul Institute of the Arts, his short film How to Operate a Polaroid... END_OF_DOCUMENT_TOKEN_TO_BE_REPLACED
We are just one week away from the start of the 2nd Korea International Expat Film Festival (KIXFF).  Festival director Kevin Lambert took some time from his busy schedule to answer questions about the festival which... END_OF_DOCUMENT_TOKEN_TO_BE_REPLACED

Having a film selected to premiere at the Cannes Film Festival is an incredible achievement - having two is quite extraordinary. Yet that is precisely what director Hong Sang-soo has done, as The Day After (그 후) and Claire's Camera (클레어의 카메라) are due to be screened, with both films starring actress Kim Min-hee. Selected for the 'In Competition'... END_OF_DOCUMENT_TOKEN_TO_BE_REPLACED
The Villainess (악녀) has received an explosive trailer in the run-up to its debut at the Cannes Film Festival on May 21st. Appearing in the 'Out of Competition - Midnight Projections' program, writer/director Jung Byung-gil's latest... END_OF_DOCUMENT_TOKEN_TO_BE_REPLACED
Director Bong Joon-ho's Okja (옥자) is almost upon us. The highly anticipated science-fiction/drama is set to premiere In Competition at the Cannes Int. Film Festival on May 19th, before appearing on Korean cinema screens around June... END_OF_DOCUMENT_TOKEN_TO_BE_REPLACED