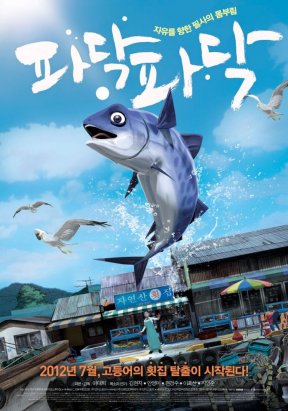 Animated films have made several attempts to capture the world that exists in the ocean. Pixar’s Finding Nemo undoubtedly leads the pack, yet Help! I’m a Fish, Shark Tale and A Turtle’s Tale: Sammy’s Adventures all work hard to convey the vibrancy of life under the waves. Coupled with the great variety of species that dwell there, the animations offer some fascinating visual storytelling.

Given the bright and cheerful poster of PADAK (파닥파닥), parents could easily be forgiven for thinking that this feature by writer/director Lee Dae-hee (이대희) is of a similar ilk. Yet their children would be horrified to discover a dark story featuring cannibalism, torture, and characters being eaten alive. Such violence cannot help but overshadow the themes of freedom and identity that run throughout the narrative, while the crude animation does little to help matters.

Captured at sea, a mackerel (고등어, Kim Hyeon-ji (김현지) is taken to a sushi restaurant and placed in a tank ready for customers. There she encounters other species of fish trapped in the same predicament, yet as they are from a fish farm they can’t understand the mackerel’s desperate desire to return to the ocean. Her constant attempts to escape earn her the nickname ‘Padak’ due to the swishing of her fins, while the other fish teach her methods to survive. But before long Padak’s knowledge and persistence comes into conflict with Master Flatfish (올드 넙치, Si Yeong-joon (시영준) an old halibut that holds an iron-fisted regime over the tank. 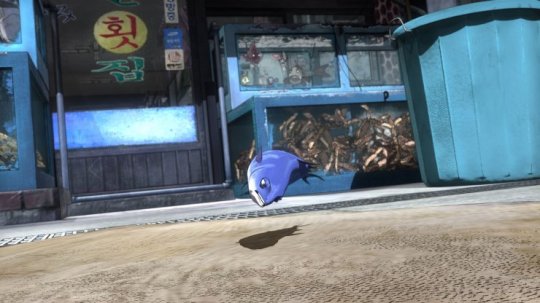 PADAK begins ominously during a depressingly overcast morning, where the fisherman haul their wares into large lorries ready for the local restaurants. The atmosphere generated by such scenes is bleak and foreboding, and director Lee Dae-hee does a great job in emphasizing the melancholy through the colour palette. Combined with utilizing Padak’s point-of-view, the confusion and stress that she endures is conveyed well.

Yet these early scenes immediately highlight one of the great animation problems of the film, as the people are so stiff and rigid it is distracting. The animation style is reminiscent of the old Sony Playstation/Sega Dreamcast era, where ‘cell-shading’ was employed to convey the 3-D features whilst also masking the limitations of the technology. This is perhaps an unfair criticism given that Padak is an independent film, but whenever a human appears it immediately draws the audience out of the story. However, when the story centers on the fish at the heart of the film the animation becomes much more bearable, and it is clear that a lot of time and energy went into their creation. Indeed, the details on the fish ‘skins’ are quite impressive, especially following conflict.

Such violence is an enormous issue within the film, and is often quite horrific. Characters that are the focus of the film are cruelly beaten, while others are shown being decapitated or boiled alive by the sushi chef, and even eaten alive by customers while the face of the fish is still moving and breathing. If the intention of director Lee Dae-hee is too scare people away from sushi restaurants, such sequences must be considered a success. The true horror however is reserved for the scenes depicting cannibalism, as the fish kill injured newbies and devour it in a mess of flesh and dissipating blood. 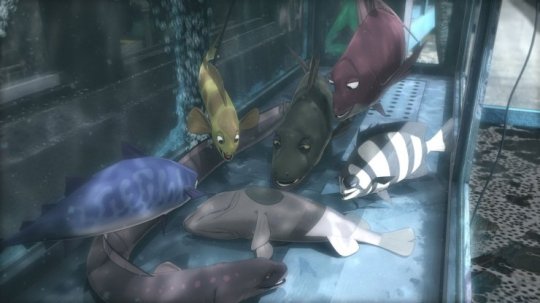 The fish resort to cannibalism to survive

The terror such scenes convey also detract from the core themes of the film, which are concerned with freedom and identity. Old Master Flatfish has created a dictatorship inside the tank, forged through fear of death as well as the lack of education his subordinates exhibit. Padak, with her knowledge of the ocean and dreams of liberty, challenges the regime forcing a conflict between them. The debate between democracy and fascism is nothing new, yet the manner in which it is explored in the tank offers somewhat of a fresh approach to the concept. Yet as Padak slowly starts to win over the other fish with her desire to return to the sea, it is impossible not to reminisce about similar scenes from Finding Nemo which dealt with the same issues but in a more enjoyable – and less bloodthirsty – fashion.

Musical numbers are a surprising addition to Padak, and as they appear in the form of dream sequences director Lee uses the opportunity to experiment with alternatives forms of animation. The songs are not particularly uplifting or catchy, but the different animated styles are interesting and are used effectively as bridges between the dialogue in the tank and the hopes and dreams of the fish involved. 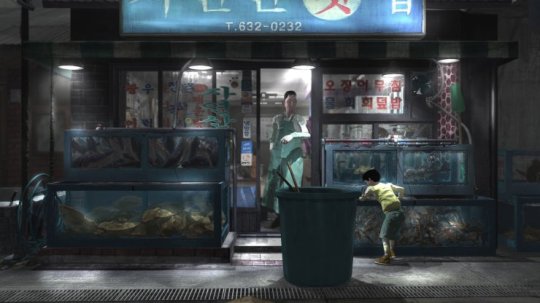 The sushi restaurant is a place of genuine horror

PADAK (파닥파닥) is a novel attempt at capturing the lives of fish, one that explores the predicament of living in fear of death due to containment in a sushi restaurant tank. Writer/director Lee Dae-hee (이대희) competently conveys the issues of freedom and identity at the heart of the narrative, but they are subsumed by the awful violence and cannibalism that arises. While the animation of the fish is enjoyable the film staggers greatly when conceiving humans. As such PADAK an incredibly mixed, and rather dark, animation.

For Korean cinema, 2019 was a year that saw the continuation of trends that have been readily apparent for the past several years - an increasing number of big blockbuster/commercially-orientated films with high production values, and the decreasing quality of creative, engaging, and memorable stories. That is not to say the talent has disappeared of... END_OF_DOCUMENT_TOKEN_TO_BE_REPLACED
2018 was quite a bizarre year for Korean cinema. The year began much like any other. The first few months of the year were typically dedicated to family-friendly fare. News of Korean films that were... END_OF_DOCUMENT_TOKEN_TO_BE_REPLACED
While the films released throughout any particular year are indicative of a country's identity, for Korean cinema in 2017 the exploration of political and social issues were especially revealing of the cultural shift that has... END_OF_DOCUMENT_TOKEN_TO_BE_REPLACED

Acclaimed actress Jeon Do-yeon is to be honoured at the 21st Bucheon International Fantastic Film Festival (BiFan) this year, in celebration of her 20 year career that began with Contact back in 1997. Entitled 'Contact, Jeon Do-yeon,' the special program is dedicated to the revered actress and will feature highlights from her incredible filmography, including Secret Sunshine... END_OF_DOCUMENT_TOKEN_TO_BE_REPLACED
Director Kim Jong-Kwan is well-known to fans of independent Korean cinema. A graduate of the Seoul Institute of the Arts, his short film How to Operate a Polaroid... END_OF_DOCUMENT_TOKEN_TO_BE_REPLACED
We are just one week away from the start of the 2nd Korea International Expat Film Festival (KIXFF).  Festival director Kevin Lambert took some time from his busy schedule to answer questions about the festival which... END_OF_DOCUMENT_TOKEN_TO_BE_REPLACED

Having a film selected to premiere at the Cannes Film Festival is an incredible achievement - having two is quite extraordinary. Yet that is precisely what director Hong Sang-soo has done, as The Day After (그 후) and Claire's Camera (클레어의 카메라) are due to be screened, with both films starring actress Kim Min-hee. Selected for the 'In Competition'... END_OF_DOCUMENT_TOKEN_TO_BE_REPLACED
The Villainess (악녀) has received an explosive trailer in the run-up to its debut at the Cannes Film Festival on May 21st. Appearing in the 'Out of Competition - Midnight Projections' program, writer/director Jung Byung-gil's latest... END_OF_DOCUMENT_TOKEN_TO_BE_REPLACED
Director Bong Joon-ho's Okja (옥자) is almost upon us. The highly anticipated science-fiction/drama is set to premiere In Competition at the Cannes Int. Film Festival on May 19th, before appearing on Korean cinema screens around June... END_OF_DOCUMENT_TOKEN_TO_BE_REPLACED
Join 143 other subscribers