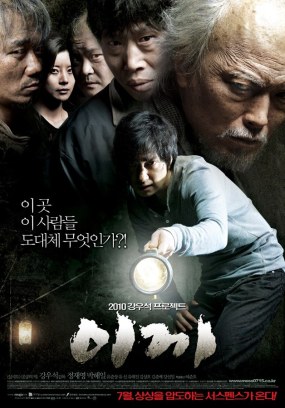 The corruption of the ruling elite is certainly nothing new in Korean cinema. After years of military dictatorships and scandalous corporate backhanders, it’s clearly understandable why such themes are continuously prevalent. However these narratives often approach from a reactionary perspective, highlighting the suffering of those victimized by injustices. Little explored are the foundations of a community, the roles and interplay of law, religion, power, crime and punishment in the creation of a society. Such Shakespearean motifs are traditionally reserved for period dramas, yet Kang Woo-seok’s (강우석) Moss (이끼) wonderfully examines the labyrinthine networks of power in a contemporary village in Gangwon province. Based on the incredibly popular internet comic, Moss is an exhilarating and fresh addition to the thriller genre.

While struggling against a law suit, Ryoo Hae-gook (Park Hae-il (박해일) receives news that his estranged father, Yoo Mok-hyeong (Heo Joon-ho (허준호), has died. Visiting the estate, Hae-gook is surprised to learn of his late father’s role as one of the elder statesmen of the village, yet merely wishes to resolve  any outstanding affairs and return to his life in Seoul. However Hae-gook’s curiosity is piqued when his father’s partner, the powerful village foreman Cheon Yong-deok (Jeong Jae-yeong (정재영) and his three right-hand men – Kim Deok-cheon (Yoo Hae-jin (유해진), Jeon Seok-man (Kim Sang-ho (김상호), and Ha Seong-gyoo (Kim Joon-bae (김준배) – continually attempt to persuade him to leave.  As Hae-gook digs deeper into the mystery of his father’s death and the strange behaviour of the residents, he must confront the disturbing truth about the village and its inhabitants.

The residents of the village are not all they seem

Screenwriter Jeong Ji-woo (정지우) has translated the web-comic to film with incredible skill, lacing each protagonist with depth and nuance – as well as fully realised character arcs – that makes each confrontation compelling viewing. This is remarkable as the 163 minute running time may seem excessive, but the narrative is so fueled with suspense and the protagonists so fascinating that the time is hardly noticeable. The plot is the epitome of labyrinthine, carefully taking time to construct the scenario through flashbacks and the creation (and breakdown) of relationships through subtle character defining events. Director Kang Woo-seok is impressive in visualizing such dense material, from the intimidating fortress overlooking the village to the claustrophobic subterranean tunnels. Praise should also be bestowed upon the set design, lighting and editing departments, who display ingenuity in creating the tension-filled world of Moss.

The actors are also wonderful in bringing the community of Moss alive. Park Hae-il is excellent as the idealistic Hae-gook who is continually involved in events beyond his understanding, while his nemeses – Yoo Hae-jin, Kim Sang-ho and Kim Joon-bae – are incredibly unnerving and intense in portraying the criminal classes/extensions of power. However, the most exceptional performance belongs to Jeong Jae-yeong, who is loud, violent and ambitious as a young man, but silently commands respect as an elder. The sheer intensity conveyed through his expressions is amazingly sinister, demanding obedience with merely a glance. The weakest link is Yoo Seon as store owner Lee Yeong-ji through no fault on her part, as her role is virtually forgotten until the third act when her presence is suddenly elevated into a lead protagonist.

Hae-gook must traverse a literal tunnel of deceit

Thematically, Moss is also a triumph. The portrayal of corruption seemingly endemic with the ruling elite is hardly original, but Moss strives to explore all areas in the creation of a society, notably the role of religion. As such, the village in Moss acts as a microcosm for society, and how the younger generation must fight against the greed of their elders. Yong-deok, the village foreman, was a corrupt police officer in his youth but his ambition for power was continually unfulfilled. That is, until he met Mok-hyeong, a man with a violent past that had apparently found redemption through religion who was quickly amassing followers. The jealousy for power and influence ultimately fuels their relationship, yet both are keenly aware that alone they can achieve little. In joining forces to create a community both men have similar intentions but are ideologically opposed, as they wish to exert dominance over others but through different means. Each man is clearly representative of the ideological vie for power in society, and the process in which they become increasingly more corrupt is as organic as it is alarming. There is rather blatant bias however, as Mok-hyeong’s Christian ideology is constantly  represented as inherently ‘good’ which diminishes the exploration somewhat.

In discovering the sinister origins of the village, Hae-gook is representative of the younger generation that must reveal and persecute such greed. Hae-gook studies old books and documents, finds subterranean tunnels, and must even join forces with an enemy in the pursuit of his father’s murderer. As a young divorcee, Hae-gook embodies the change in society as the shift away from tradition becomes ever more apparent. His naivety and idealism is endearing but simultaneously foolhardy, as he continually fails to understand the larger events at hand.

Moss is a incredibly well executed thriller that delves into Shakespearean themes of the vie for power amongst the ruling classes. The interplay of different features of society, from religion to the criminal classes, constructs a dense tale of suspense that highlights the unfairness, and the generational differences, within a culture and emphasizes the importance of prosecuting the corrupt. The bias nature in representing Christianity, and the under-developed female role slightly detract from the viewing experience, but despite this Moss is a highly entertaining and compelling foray into corruption in contemporary Korea.

For Korean cinema, 2019 was a year that saw the continuation of trends that have been readily apparent for the past several years - an increasing number of big blockbuster/commercially-orientated films with high production values, and the decreasing quality of creative, engaging, and memorable stories. That is not to say the talent has disappeared of... END_OF_DOCUMENT_TOKEN_TO_BE_REPLACED
2018 was quite a bizarre year for Korean cinema. The year began much like any other. The first few months of the year were typically dedicated to family-friendly fare. News of Korean films that were... END_OF_DOCUMENT_TOKEN_TO_BE_REPLACED
While the films released throughout any particular year are indicative of a country's identity, for Korean cinema in 2017 the exploration of political and social issues were especially revealing of the cultural shift that has... END_OF_DOCUMENT_TOKEN_TO_BE_REPLACED

Acclaimed actress Jeon Do-yeon is to be honoured at the 21st Bucheon International Fantastic Film Festival (BiFan) this year, in celebration of her 20 year career that began with Contact back in 1997. Entitled 'Contact, Jeon Do-yeon,' the special program is dedicated to the revered actress and will feature highlights from her incredible filmography, including Secret Sunshine... END_OF_DOCUMENT_TOKEN_TO_BE_REPLACED
Director Kim Jong-Kwan is well-known to fans of independent Korean cinema. A graduate of the Seoul Institute of the Arts, his short film How to Operate a Polaroid... END_OF_DOCUMENT_TOKEN_TO_BE_REPLACED
We are just one week away from the start of the 2nd Korea International Expat Film Festival (KIXFF).  Festival director Kevin Lambert took some time from his busy schedule to answer questions about the festival which... END_OF_DOCUMENT_TOKEN_TO_BE_REPLACED

Having a film selected to premiere at the Cannes Film Festival is an incredible achievement - having two is quite extraordinary. Yet that is precisely what director Hong Sang-soo has done, as The Day After (그 후) and Claire's Camera (클레어의 카메라) are due to be screened, with both films starring actress Kim Min-hee. Selected for the 'In Competition'... END_OF_DOCUMENT_TOKEN_TO_BE_REPLACED
The Villainess (악녀) has received an explosive trailer in the run-up to its debut at the Cannes Film Festival on May 21st. Appearing in the 'Out of Competition - Midnight Projections' program, writer/director Jung Byung-gil's latest... END_OF_DOCUMENT_TOKEN_TO_BE_REPLACED
Director Bong Joon-ho's Okja (옥자) is almost upon us. The highly anticipated science-fiction/drama is set to premiere In Competition at the Cannes Int. Film Festival on May 19th, before appearing on Korean cinema screens around June... END_OF_DOCUMENT_TOKEN_TO_BE_REPLACED
Join 143 other subscribers