Director O Muel’s (오멸) Jiseul (지슬) quickly became known as one of the most interesting and exemplary screenings upon its debut at the 2012 Busan International Film Festival. The monochrome film depicts the little-known events of the 1948 Jeju Island Uprising – or rather, massacre – in which the Korean military brutally suppressed and killed up to a fifth of the entire population. For fifty years after, even mentioning what transpired was a crime punishable by torture and incarceration. Yet with his fourth feature director O Muel, a Jeju Islander himself, presents the atrocities that were committed with stark and uncompromising realism, simultaneously portraying the horrifying events alongside the indomitable spirit of the Jeju villagers. While Jiseul suffers due to lack of context and scope, the film is poignant and harrowing in its account of the tragedy, with the five awards won at BIFF, and an invitation to the 2013 Sundance Film Festival and International Film Festival Rotterdam, testament to its raw cinematic power.

Throughout Jiseul director O Meul employs stunning directorial flair in capturing the range of experiences brought about by the Uprising. Of particular note are the astonishing long takes that are utterly absorbing, drawing the audience into such awful events as exploring a homestead following a raid, and an all-out assault on a village. In addition to the monochrome colours, such long takes are highly effective in conveying stark, chilling realism and as such are powerfully emotive. It’s impossible not to feel horror as farmers and the elderly are mercilessly stabbed and brutalized during such sequences. The incredible cinematography by Yang Jung-Hoon also adds potency as the snow covered landscapes and farming villages are attractive yet foreboding, and the tension as these arenas are traversed is often palpable.

Yet the heart of Jiseul is undoubtedly the assortment of colourful characters that populate the film, particularly the Islanders who flee to the safety of the caves. O Muel displays his talents as a scriptwriter with their dialogue as the Islanders laugh, bicker, and discuss the farming lifestyle amongst themselves, all of which are highly amusing. While there are too many figures to delve into serious character development, the conversations are unfailing in creating empathy with their plight. Initially, due to the lack of context, it seems as if the Islanders are running from a threat that doesn’t exist. Yet as the narrative progresses, and the terrible physical and sexual assaults perpetrated by the soldiers are portrayed, the threat becomes ever more real. In Korean cinema such atrocities are most commonly aligned with an external threat – typically Japanese imperial forces – and O Muel deserves credit for challenging this ideological form and locating the threat internally. The director also wisely moves beyond mere stereotypes of evil in depicting factions of soldiers breaking away from the main Korean army, holding true to historical accounts.

It is in this historical regard that Jiseul suffers the most, as anyone unfamiliar with the Jeju Uprising will find precious little context given. Aside from a few sentences that bookend the film, it is difficult to achieve a sense of appreciation as to why the events are occurring, and what led to this point. Hints are occasionally given as to the wider conflict ongoing around the island, yet as there is little sense of scale it is difficult to determine. Yet in place of scale, Jiseul contains potent symbolism through the use of iconography and other facets of the mise-en-scene that not only convey the tragic loss of life, but also the attempts to conceal the truth. As such the power of the film lies in its intimate, raw visual aesthetics and makes Jiseul one of the most intriguing, and important, Korean films of 2012. 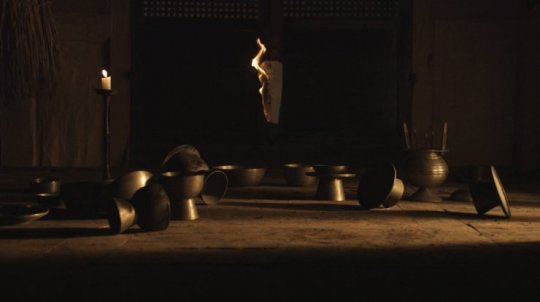 The monochrome palette and symbolism are highly effective

Jiseul (지슬) is a powerful and harrowing account of the 1948 Jeju Uprising, with director O Muel’s (오멸) monochrome palette and intense visual style adding incredible potency and realism to the true-life events. Accompanied by some wonderful cinematography by Yang Jung-Hoon, director O Muel deserves credit for challenging dominant ideology by not only attempting to create awareness of the massacre, but also for locating the source of horror internally with the Korean military. While the film suffers from lack of context for those ignorant of the Uprising, Jiseul is an exemplary independent production and one of the most important releases of 2012.

For Korean cinema, 2019 was a year that saw the continuation of trends that have been readily apparent for the past several years - an increasing number of big blockbuster/commercially-orientated films with high production values, and the decreasing quality of creative, engaging, and memorable stories. That is not to say the talent has disappeared of... END_OF_DOCUMENT_TOKEN_TO_BE_REPLACED
2018 was quite a bizarre year for Korean cinema. The year began much like any other. The first few months of the year were typically dedicated to family-friendly fare. News of Korean films that were... END_OF_DOCUMENT_TOKEN_TO_BE_REPLACED
While the films released throughout any particular year are indicative of a country's identity, for Korean cinema in 2017 the exploration of political and social issues were especially revealing of the cultural shift that has... END_OF_DOCUMENT_TOKEN_TO_BE_REPLACED

Acclaimed actress Jeon Do-yeon is to be honoured at the 21st Bucheon International Fantastic Film Festival (BiFan) this year, in celebration of her 20 year career that began with Contact back in 1997. Entitled 'Contact, Jeon Do-yeon,' the special program is dedicated to the revered actress and will feature highlights from her incredible filmography, including Secret Sunshine... END_OF_DOCUMENT_TOKEN_TO_BE_REPLACED
Director Kim Jong-Kwan is well-known to fans of independent Korean cinema. A graduate of the Seoul Institute of the Arts, his short film How to Operate a Polaroid... END_OF_DOCUMENT_TOKEN_TO_BE_REPLACED
We are just one week away from the start of the 2nd Korea International Expat Film Festival (KIXFF).  Festival director Kevin Lambert took some time from his busy schedule to answer questions about the festival which... END_OF_DOCUMENT_TOKEN_TO_BE_REPLACED

Having a film selected to premiere at the Cannes Film Festival is an incredible achievement - having two is quite extraordinary. Yet that is precisely what director Hong Sang-soo has done, as The Day After (그 후) and Claire's Camera (클레어의 카메라) are due to be screened, with both films starring actress Kim Min-hee. Selected for the 'In Competition'... END_OF_DOCUMENT_TOKEN_TO_BE_REPLACED
The Villainess (악녀) has received an explosive trailer in the run-up to its debut at the Cannes Film Festival on May 21st. Appearing in the 'Out of Competition - Midnight Projections' program, writer/director Jung Byung-gil's latest... END_OF_DOCUMENT_TOKEN_TO_BE_REPLACED
Director Bong Joon-ho's Okja (옥자) is almost upon us. The highly anticipated science-fiction/drama is set to premiere In Competition at the Cannes Int. Film Festival on May 19th, before appearing on Korean cinema screens around June... END_OF_DOCUMENT_TOKEN_TO_BE_REPLACED