Independent filmmaker Hae-gang (Park Jung-pyo (박중표) has worked hard for years, helming several notable productions that have earned him a respectable reputation. However his latest endeavour is proving more difficult than most, largely due to his uncompromising, aggressive, and occasionally downright rude attitude on set. Worse still, his inability to distance himself from the stresses of production generate conflict with his long-suffering girlfriend, creating distance between them. With both time and money running out, and crew and companions turning away from him, Hae-gang is forced to make tough choices that could ultimately challenge his director’s cut.

Director’s CUT (디렉터스 컷) is a welcome addition in portraying the difficulties afflicting filmmakers. The great strength of the drama lies in the portrayal of such struggles with a great sense of realism, from minor conflicts on set of changing camera shots to larger challenges of creative control with external agencies. Writer/director Park Joon-bum (박준범) has done a remarkable job of exploring a multitude of facets related to the independent industry, even extending beyond production based problems to highlight the corruption within film festivals, a potent and brave move indeed. Also of note is the manner in which Hae-gang is conveyed as his own worst enemy. The frustrated filmmaker is so utterly devoted to his art that he unwittingly destroys relationships with those closest to him, and director Park constructs his protagonist well as passionate yet flawed perfectionist desperate for creative control.

However that said, Hae-gang is also a quite unlikable protagonist throughout the entirety of Director’s CUT. Fighting to retain his creative vision is one thing, yet the filmmaker constantly creates unnecessary conflict amongst his peers for little reason, stubbornly arguing over ridiculous matters in the name of pride and ambition. Worse still, Hae-gang’s treatment of his sweet and caring girlfriend is frankly awful, and it’s a little puzzling why she endures such hurtful conduct. This would be fine if Hae-gang evolved as a character during the course of the narrative, yet such enlightenment never dawns on him even when it is quite obvious that he needs to change. As such it’s particularly difficult to feel empathy with his plight for Hae-gang is, for the majority of the running time, a contemptible jerk.

It’s acutely ironic that while Hae-gang is responsible for impairing his film, Director’s CUT also suffers due to similar reasons. Hae-gang’s instance for control of the final cut seems to mirror that of director Park; within the film Hae-gang is determined to employ somewhat superfluous scenes much to the annoyance of his editor, while director Park does the same in Director’s CUT much to the frustration of the audience. A scene in which the camera operator forgets the correct equipment could have easily been conveyed through a few failed attempts, for example, yet by the sixth error tedium sets in as well as the desire for a more scrupulous editor. 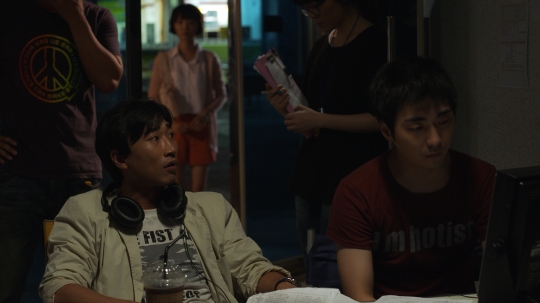 Director’s CUT (디렉터스 컷) is an interesting drama exploring the difficulties of working as an independent filmmaker. The sense of realism and the far-reaching industry issues explored by writer/director Park Joon-bum (박준범) form the core strength of the film, yet it is greatly impaired by a central protagonist who is wholly inconsiderate, rude and very difficult to empathise with. Lack of character arc notwithstanding, Director’s CUT is also ironically hampered by the need for more stringent editing, resulting in a film that is interesting rather than compelling.

For Korean cinema, 2019 was a year that saw the continuation of trends that have been readily apparent for the past several years - an increasing number of big blockbuster/commercially-orientated films with high production values, and the decreasing quality of creative, engaging, and memorable stories. That is not to say the talent has disappeared of... END_OF_DOCUMENT_TOKEN_TO_BE_REPLACED
2018 was quite a bizarre year for Korean cinema. The year began much like any other. The first few months of the year were typically dedicated to family-friendly fare. News of Korean films that were... END_OF_DOCUMENT_TOKEN_TO_BE_REPLACED
While the films released throughout any particular year are indicative of a country's identity, for Korean cinema in 2017 the exploration of political and social issues were especially revealing of the cultural shift that has... END_OF_DOCUMENT_TOKEN_TO_BE_REPLACED

Acclaimed actress Jeon Do-yeon is to be honoured at the 21st Bucheon International Fantastic Film Festival (BiFan) this year, in celebration of her 20 year career that began with Contact back in 1997. Entitled 'Contact, Jeon Do-yeon,' the special program is dedicated to the revered actress and will feature highlights from her incredible filmography, including Secret Sunshine... END_OF_DOCUMENT_TOKEN_TO_BE_REPLACED
Director Kim Jong-Kwan is well-known to fans of independent Korean cinema. A graduate of the Seoul Institute of the Arts, his short film How to Operate a Polaroid... END_OF_DOCUMENT_TOKEN_TO_BE_REPLACED
We are just one week away from the start of the 2nd Korea International Expat Film Festival (KIXFF).  Festival director Kevin Lambert took some time from his busy schedule to answer questions about the festival which... END_OF_DOCUMENT_TOKEN_TO_BE_REPLACED

Having a film selected to premiere at the Cannes Film Festival is an incredible achievement - having two is quite extraordinary. Yet that is precisely what director Hong Sang-soo has done, as The Day After (그 후) and Claire's Camera (클레어의 카메라) are due to be screened, with both films starring actress Kim Min-hee. Selected for the 'In Competition'... END_OF_DOCUMENT_TOKEN_TO_BE_REPLACED
The Villainess (악녀) has received an explosive trailer in the run-up to its debut at the Cannes Film Festival on May 21st. Appearing in the 'Out of Competition - Midnight Projections' program, writer/director Jung Byung-gil's latest... END_OF_DOCUMENT_TOKEN_TO_BE_REPLACED
Director Bong Joon-ho's Okja (옥자) is almost upon us. The highly anticipated science-fiction/drama is set to premiere In Competition at the Cannes Int. Film Festival on May 19th, before appearing on Korean cinema screens around June... END_OF_DOCUMENT_TOKEN_TO_BE_REPLACED