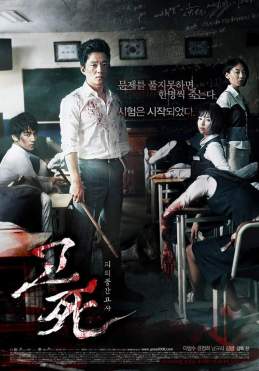 The Korean education system is a brutal, arduous regime for students; in addition to the standard school hours they must attend, students also frequent numerous private academies of various subjects during the evening, slotting in further educational events whenever spare time allows. Understandably the stress and pressure imposed by the education culture – and more specifically, parents – often leads to depression and ill health, at best. Escalating matters further are the tales of corruption as parents attempt to secure the future of their offspring through bribery and ‘favors’ of teachers and officials.

During the exam season, the students are frantically studying in an attempt to be the best in the school and secure a place in a good university. The pressure is intense and students begin to crack under the strain, yet kind teacher Hwang Chang-wook (Lee Beom-soo (이범수) tries to reassure his students; in his rival class, however, strict teacher Choi So-yeong (Yoon Jeong-hee 윤정희) pushes for the best. At the end of the exam season the relieved students prepare for vacation, yet the news of a ‘special class’ with a rival school forces the elite students to stay behind for further studies. However just as the session is due to begin, a missing student appears on TV in a death trap. The killer gives instructions that the students need to complete a series of challenges if they are to survive, and so begins a battle of wits as the students attempt to solve riddles and find the murderer before they are all killed. 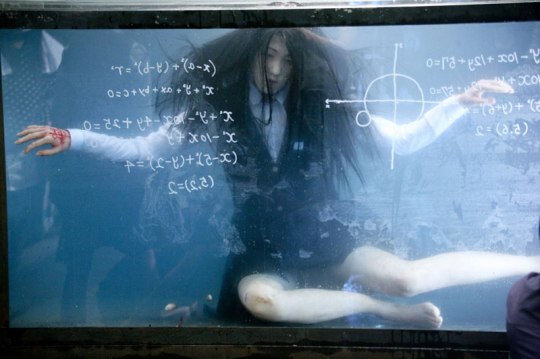 The students must solve riddles to save their classmates

While a large number of horror films require the audience to suspend their disbelief in logic, Death Bell ranks amongst the worst examples of the genre for pushing it to the limits. When murdered bodies appear, no-one looks in the direction it arrived; when voices and images are broadcast, no-one thinks to look for the source; in the search for the killer, teachers regularly leave students alone to fend for themselves. Additionally, in the attempt to be ‘Saw in a high school’, Death Bell features puzzles for students to solve in a bid to save their companions yet they and their solutions are generally pointless. The writers endeavour to add meaning to the riddles and to apply a time limit to create tension, but the execution is flat and the answers are quite ridiculous, especially as student I-na (Nam Gyoo-ri (남규리) almost immediately knows who the murders are related to.

Yet horror films aimed at a teenage audience often place chilling scenes above narrative logic, and in this regard Death Bell is also limp. Bizarrely the film features ‘torture porn’ scenes such as dripping hot candle wax on a victim, and in the oddly superfluous – and unsubtly symbolic – opening sequence featuring zombified students, horror and menstrual blood are misogynistically conveyed as one and the same. In one scene, a female student is hoisted by one leg exposing her panties for no particular reason before receiving a death not in-keeping with the other murders. The female students are routinely ‘punished’ for being intelligent and, as with American horrors from the 1970s/80s, for being curious about the opposite gender. In all cases, director Chang never builds tension effectively and instead relies on rapid camera movement and editing to provide thrills, yet as it is often difficult to see anything on screen the results are generally less than impressive.

Death Bell does become interesting in the final act however, as social commentary involving the Korean education system and the roles of parents and teachers are inserted and portrayed. This late but welcome addition depicts the extent to which high grades play in Korean culture, and the lengths to which all involved will go to secure them in the highly competitive system. Unfortunately as such themes are introduced so late the potential is never truly expanded, yet it does provide some much needed impetus to events as well as tying up narrative loose ends. 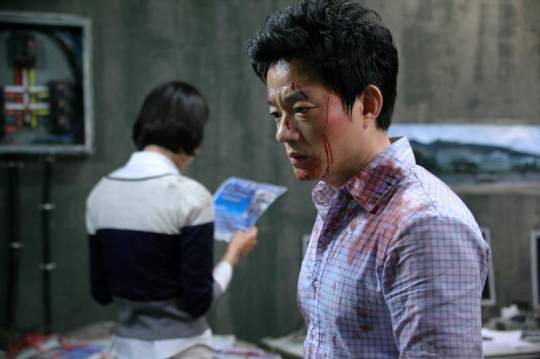 As teacher Hwang Chang-wook, Lee Beom-soo is the central protagonist of the film and does well to keep the pace of the film moving and involving. His role is highly limited due to awfully vapid narrative, forcing him to be a reactionary figure in moments that lack logic, yet the actor performs competently and genuinely works hard to make the the premise and his situation believable. He ultimately fails due to the nonsensical script, but his effort is commendable.

The films other two lead roles fall to Yoon Jeong-hee as strict teacher Choi So-yeong and Nam Gyoo-ri student I-na. Both roles are woefully underdeveloped and leave the actresses with little to do save to convey the stereotypes they are constructed as – Choi So-yeong as a stoic disciplinarian and I-na as a vulnerable schoolgirl interested in boys. Both roles add precious little to the narrative, but the actresses competently act the stereotypes ascribed to them. 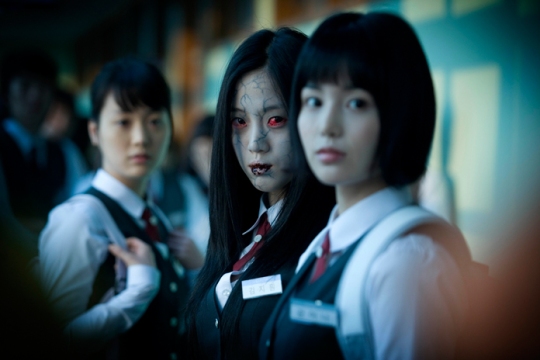 Are the corridors of the school haunted by a ghost?

For Korean cinema, 2019 was a year that saw the continuation of trends that have been readily apparent for the past several years - an increasing number of big blockbuster/commercially-orientated films with high production values, and the decreasing quality of creative, engaging, and memorable stories. That is not to say the talent has disappeared of... END_OF_DOCUMENT_TOKEN_TO_BE_REPLACED
2018 was quite a bizarre year for Korean cinema. The year began much like any other. The first few months of the year were typically dedicated to family-friendly fare. News of Korean films that were... END_OF_DOCUMENT_TOKEN_TO_BE_REPLACED
While the films released throughout any particular year are indicative of a country's identity, for Korean cinema in 2017 the exploration of political and social issues were especially revealing of the cultural shift that has... END_OF_DOCUMENT_TOKEN_TO_BE_REPLACED

Acclaimed actress Jeon Do-yeon is to be honoured at the 21st Bucheon International Fantastic Film Festival (BiFan) this year, in celebration of her 20 year career that began with Contact back in 1997. Entitled 'Contact, Jeon Do-yeon,' the special program is dedicated to the revered actress and will feature highlights from her incredible filmography, including Secret Sunshine... END_OF_DOCUMENT_TOKEN_TO_BE_REPLACED
Director Kim Jong-Kwan is well-known to fans of independent Korean cinema. A graduate of the Seoul Institute of the Arts, his short film How to Operate a Polaroid... END_OF_DOCUMENT_TOKEN_TO_BE_REPLACED
We are just one week away from the start of the 2nd Korea International Expat Film Festival (KIXFF).  Festival director Kevin Lambert took some time from his busy schedule to answer questions about the festival which... END_OF_DOCUMENT_TOKEN_TO_BE_REPLACED

Having a film selected to premiere at the Cannes Film Festival is an incredible achievement - having two is quite extraordinary. Yet that is precisely what director Hong Sang-soo has done, as The Day After (그 후) and Claire's Camera (클레어의 카메라) are due to be screened, with both films starring actress Kim Min-hee. Selected for the 'In Competition'... END_OF_DOCUMENT_TOKEN_TO_BE_REPLACED
The Villainess (악녀) has received an explosive trailer in the run-up to its debut at the Cannes Film Festival on May 21st. Appearing in the 'Out of Competition - Midnight Projections' program, writer/director Jung Byung-gil's latest... END_OF_DOCUMENT_TOKEN_TO_BE_REPLACED
Director Bong Joon-ho's Okja (옥자) is almost upon us. The highly anticipated science-fiction/drama is set to premiere In Competition at the Cannes Int. Film Festival on May 19th, before appearing on Korean cinema screens around June... END_OF_DOCUMENT_TOKEN_TO_BE_REPLACED
Join 143 other subscribers