The perils of dating have long been a feature of the romantic-comedy, perhaps portrayed more than any other area of the relationship status-quo due to the high probability of farcical foolishness that will ensue. Attempting to appear suave, beautiful, intellectual, sophisticated, rich, cultured – the possibilities are endless for misunderstandings and comedic confrontations. The Will Smith starring Hitch (2005) took an alternative approach to the tried-and-tested formula, featuring a ‘date doctor’ to help fumbling men stop self-sabotaging their amorous advances.

In Cyrano Agency (시라노;연애조작단) this premise is expanded from a solitary ‘date doctor’ to a troupe of actors, who study and research the targets of smitten clients and prepare scenarios, rehearse lines of script, and employ every romantic cliche at their disposal for a successful matchmaking  service. The name is, of course, taken from the famous play Cyrano de Bergerac, and while the idea of displaced romance is present and the film is quite charming, it suffers from misplaced melodrama, lack of depth and a finale that is incredibly bitter-sweet.

Byeong-hoon (Eom Tae-woong (엄태웅) is the head of a failed acting troupe consisting of feisty female advisor Min-yeong (Park Sin-hye (박신혜), researcher Jae-pil  (Jeon Ah-min (전아민) and chameleonic Cheol-bin  (Park Cheol-min (박철민). In order to generate money for theatre productions they create the Cyrano Agency, an organization where the actors use their talents to help lovelorn men match with the women they desire, with an impressive 99% success rate. Yet complications arise when Sang-yong (Choi Daniel (최 다니엘) arrives asking for assistance in wooing the beautiful rebellious Hee-joong (Lee Min-jeong (이민정) – the former girlfriend of Agency boss Byeong-hoon. Will Byeong-hoon put his personal feelings aside and complete the contract, or steal Hee-joong for himself?

One of the strengths of Cyrano Agency lies in the highly charismatic opening sequence, in which the acting troupe help to woo a barista for a client. The team train their love-stricken patron to act cool and aloof akin to romantic actors, and stage an array of cliched devices – making the the target jealous, playing soundtracks, and even employing a ‘rain machine’ for a melodramatic finale – offering a wonderfully postmodern and comedic portrayal of love. The directing and editing are highly competent during this sequence with both parties fully aware of the conventions of the romance genre, simultaneously revering the material through dramatic framing and parodying through overt melodrama. Unfortunately, after such a strong opening, Cyrano Agency falters. The whimsical tongue-in-cheek nature initially conveyed is jettisoned in favour of genuine melodrama, and the change in tone detracts from the overall enjoyment as the comedy quickly deteriorates. The premise certainly has potential, as next target Hee-joong is also the former girlfriend of boss Byeong-hoon, with his subconscious sabotage of scenarios initially humourous but quickly becoming petty. Bizarrely, the relationship – both past and present – between Byeon-hoon and Hee-joong is foreground, emphasising their intertwined destiny as they continually encounter each other and in doing so reveal the love they both still clearly share. As such, client Sang-yong is somewhat of a footnote in the proceedings and the notion that Byeong-hoon would continue to help match him with together with Hee-jong is odd at best.

Hee-joong’s role is incredibly underdeveloped and passive, merely serving to be pretty and to act as the prize in the relationship tug-of-war. Such a misogynistic representation is exacerbated by the insincerity of Sang-yong as he has fallen in love with her image, rather than her personality. This is ultimately the major failing point of Cyrano Agency, as while the narrative portrays the facade of love it never truly explores it, despite given ample opportunity when the team encounter heart-broken former clients. This leads to an incredibly bitter-sweet finale as Hee-joong, finally with knowledge of the agency and Byeong-hoon and Sang-yong’s role, makes her choice.

The shift in focus on the love triangle from the earlier team dynamic further alters the pace and tone, relegating members of the team to almost cameo sized roles rather than supporting ones, an unfortunate choice considering their impact in the early stages. Despite this, the actors perform their roles well particularly Park Sin-hye (박신혜) as Min-yeong, conveying strength and passion in each scene. As Cyrano Agency becomes an unrequited love triangle, acting duties generally fall to three core performers. Eom Tae-woong is the most notable conveying his internal conflict between his own desire and his job well. Lee Min-jeong is competent as Hee-joong, although the limiting role is responsible for her restrained performance. Choi Daniel unfortunately suffers the most due to the somewhat schizophrenic nature of protagonist Sang-yong. Sang-yong flits between moment of grandiose kindness to liar, from sensitive romantic to criminal, even causing one of the team members from the Agency to comment that something is amiss with their client. The distrust and insincerity conveyed again undermine the notion that Byeong-hoon would attempt to pair Sang-yong with the woman he is seemingly destined for. 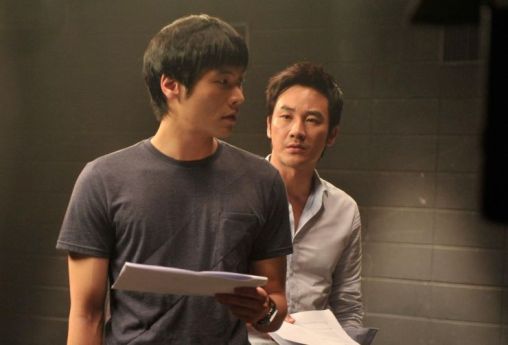 Cyrano Agency is an enjoyable take on the romantic-comedy genre, particularly the wonderful opening sequence that plays with notions of romance in a postmodernist fashion. The decision to deviate from such a winning formula is puzzling, as the focus on a love triangle and the insincerity of the love portrayed albeit not explored, detract from the pace, tone, and promise offered in the first fifteen minutes. That said, fans of the genre will no doubt be appeased by what Cyrano Agency  offers, although many will be perplexed by the bitter-sweet nature of the finale.

For Korean cinema, 2019 was a year that saw the continuation of trends that have been readily apparent for the past several years - an increasing number of big blockbuster/commercially-orientated films with high production values, and the decreasing quality of creative, engaging, and memorable stories. That is not to say the talent has disappeared of... END_OF_DOCUMENT_TOKEN_TO_BE_REPLACED
2018 was quite a bizarre year for Korean cinema. The year began much like any other. The first few months of the year were typically dedicated to family-friendly fare. News of Korean films that were... END_OF_DOCUMENT_TOKEN_TO_BE_REPLACED
While the films released throughout any particular year are indicative of a country's identity, for Korean cinema in 2017 the exploration of political and social issues were especially revealing of the cultural shift that has... END_OF_DOCUMENT_TOKEN_TO_BE_REPLACED

Acclaimed actress Jeon Do-yeon is to be honoured at the 21st Bucheon International Fantastic Film Festival (BiFan) this year, in celebration of her 20 year career that began with Contact back in 1997. Entitled 'Contact, Jeon Do-yeon,' the special program is dedicated to the revered actress and will feature highlights from her incredible filmography, including Secret Sunshine... END_OF_DOCUMENT_TOKEN_TO_BE_REPLACED
Director Kim Jong-Kwan is well-known to fans of independent Korean cinema. A graduate of the Seoul Institute of the Arts, his short film How to Operate a Polaroid... END_OF_DOCUMENT_TOKEN_TO_BE_REPLACED
We are just one week away from the start of the 2nd Korea International Expat Film Festival (KIXFF).  Festival director Kevin Lambert took some time from his busy schedule to answer questions about the festival which... END_OF_DOCUMENT_TOKEN_TO_BE_REPLACED

Having a film selected to premiere at the Cannes Film Festival is an incredible achievement - having two is quite extraordinary. Yet that is precisely what director Hong Sang-soo has done, as The Day After (그 후) and Claire's Camera (클레어의 카메라) are due to be screened, with both films starring actress Kim Min-hee. Selected for the 'In Competition'... END_OF_DOCUMENT_TOKEN_TO_BE_REPLACED
The Villainess (악녀) has received an explosive trailer in the run-up to its debut at the Cannes Film Festival on May 21st. Appearing in the 'Out of Competition - Midnight Projections' program, writer/director Jung Byung-gil's latest... END_OF_DOCUMENT_TOKEN_TO_BE_REPLACED
Director Bong Joon-ho's Okja (옥자) is almost upon us. The highly anticipated science-fiction/drama is set to premiere In Competition at the Cannes Int. Film Festival on May 19th, before appearing on Korean cinema screens around June... END_OF_DOCUMENT_TOKEN_TO_BE_REPLACED