The partnership of Steven Soderbergh and George Clooney brought back the ‘cool’ of the con-man in their remake of the classic ratpack film Ocean’s Eleven (2001). With Soderbergh’s vision for capturing the flamboyance and decadence of Las Vegas and Clooney’s uncanny knack for emanating panache and suavity, the duo made the con-man someone to root for again as the intelligent, just-one-step-ahead, underdog. Yet the machismo comes with a tongue-in-cheek sensibility, as Clooney and his cohorts are constantly bamboozled by the feminine wiles of their love interests who are equally as intelligent, cunning, and charismatic. The chemistry between them, and the cat and mouse games they play, add to the appeal of the thrilling con-man lifestyle as to who will outsmart the other and emerge victorious, walking away with a small fortune.

Countdown (카운트다운) endeavours to re-create such chemistry, as two highly charismatic actors – Jeon Do-yeon (전도연) and Jeong Jae-yeong (정재영) – must compete against each other while attempting to outwit other con-artists in parting with their money. It’s a competent venture for the most part, although suffers from a lack of direction in the third act and the awful misogynistic representations throughout.

Tae Geon-ho (Jeong Jae-yeong) is a tough debt collector, a man not afraid of breaking a few bones in order to obtain the money owed. His self-destructive approach has made him the top collector, but upon discovering he has only a couple of weeks left to live due to liver cancer, Geon-ho quits and seeks out potential donors. As none exist, his only option is to find people who received transplants  from the organs of his deceased son. Only one of these can provide him with a new liver, the enigmatic con-woman Cha Ha-yeon (Jeon Do-yeon) who ripped off several high-profile gangsters before a betrayal landed her in jail. Shortly to be released, Ha-yeon makes Geon-ho a deal – help her to get revenge on those that framed her, and she’ll willingly undergo the procedure. With time counting down on Geon-ho’s life, he and his co-hort play cat-and-mouse games with each other and criminal organisations in the hope that, when everything is settled, Ha-yeon will have her revenge and Geon-ho will have a new liver.

Geon-ho is a tough debt collector, who failing liver means his life is in countdown

Countdown incorporates an interesting mix of visual styles thanks to director Heo Jong-ho (허종호), who blends the dark tones of the criminal underworld with the bright lights of deceiving the rich with skill. In the former is Geon-ho, and the director portrays his world of shadows, violence, and debt collecting as a mixture of horror and action that threatens to engulf his central protagonist. In building the character of Geon-ho, Heo Jong-ho takes time to examine an alpha male with nothing to live for, a self-destructive selfish man, who bizarrely decides to fight for his life when faced with his own mortality. Jeong Jae-yeong portrays the stoic role well, delivering dialogue with intensity and menace while despising his place in the world. In later scenes, which take a more dramatic turn, Jeong Jae-yeong gives a stellar performance proving why he is currently one of the best actors in contemporary Korean cinema, with highly emotionally charged scenes that convey deep empathy and poignancy.

Contrasting completely with this world is Ha-cheon, as her frivolous life of consumerism and con-artistry  is depicted as luxurious, glamourous and fun. The wealthy lifestyle she targets/acquires is emphasised through the portrayal of boats, fancy restaurants, and designer clothes that reveal her incredible sex appeal and charisma. However, it is also offensively misogynistic as Ha-cheon is conveyed merely as a lying high-class prostitute rather than an intelligent and manipulative woman. References are continually made to her ‘technique’ of providing pleasure in the bedroom, and even undergoing vaginoplasty, in order to get what she wants – money and designer clothes. Ha-cheon’s history, as a mother who abandoned her daughter, serves to cement her role as a deceitful whore with no redeeming qualities, not so much femme fatale as femme devil. Furthermore, she always fails in her cons and needs rescuing by the alpha male partner she continually abandons, connoting a lack of intelligence, strength and functioning as a damsel in distress. Quite why an actress of Jeon Do-yeon’s outstanding calibre was selected for such a role is indeed puzzling, as the one-dimensional pro/antagonist offers her – and the representation of women in general – nothing of merit. 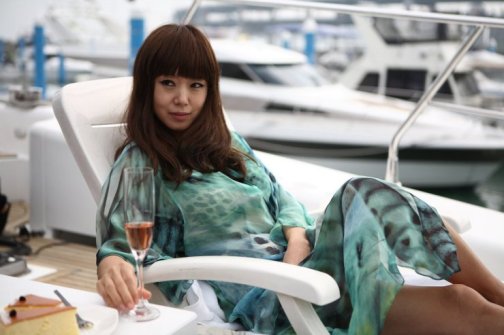 Ha-cheon is a sultry, charismatic con-woman who easily manipulates men

In terms of the narrative, which was co-written by director Heo Jong-ho and Lee Hyung-suk, Countdown is thrilling in the first and second acts, before becoming a mundane drama in the third. Korean cinema is wonderful for its innovative use of amalgamating genre techniques to create something original and/or veering into an unexpected territory. With Countdown this is something of a hinderance, as the initial premise is engaging and the mismatch of such distinct characters and the games they play is highly enjoyable. Particularly of note is a scene in a department store, where Ha-cheon outwits Geon-ho as well as a cadre of gangsters with style and elegance, escaping with a bag full of money…only to be captured by a different organization. The rapid editing and camera movement create a thrilling chase, and serve to heighten expectations for a similarly natured finale that never materializes. The true villain of the film, gangster boss Jo Myeong-seok (Lee Kyeong-yeong (이경영) is delightfully vindictive although it’s a long time before he is introduced into the narrative, which impedes the potency of the threat he presents. Despite this, on the few occasions Myeong-seok is portrayed, his violent and unforgiving style is gripping.

The final act however is disjointed in that, after the glamourous con-artistry and action scenes, kitchen sink melodrama is unnecessarily shoe-horned into the narrative. Ha-cheon’s 17 year old abandoned daughter Hyeon-ji (Lee Min-yeong (이민영) adds absolutely nothing to the proceedings except to give Geon-ho another female to save. Additionally, Geon-ho’s missing memory returns yet as his amnesia had not been a serious and impeding – or even recurring – feature, the impact is minimal despite the strong performance given by Jeong Jae-yeong.

Myeong-seok is the ruthless boss of a criminal empire

As an attempt at creating romantic chemistry through deceitful but fun con-artistry, Countdown somewhat succeeds. As always, Jeon Do-yeon and Jeong Jae-yeong give wonderful performances, and director Heo Jong-ho conveys the two opposing worlds his protagonists inhabit with skill. However, the potency of Countdown is greatly reduced through the offensively misogynistic representation of its lead female, and with a final act that holds little relation with what came before. Despite this, Countdown is an enjoyable, albeit stunted, take on inept gangsters and the glamorous world of con-artists.

For Korean cinema, 2019 was a year that saw the continuation of trends that have been readily apparent for the past several years - an increasing number of big blockbuster/commercially-orientated films with high production values, and the decreasing quality of creative, engaging, and memorable stories. That is not to say the talent has disappeared of... END_OF_DOCUMENT_TOKEN_TO_BE_REPLACED
2018 was quite a bizarre year for Korean cinema. The year began much like any other. The first few months of the year were typically dedicated to family-friendly fare. News of Korean films that were... END_OF_DOCUMENT_TOKEN_TO_BE_REPLACED
While the films released throughout any particular year are indicative of a country's identity, for Korean cinema in 2017 the exploration of political and social issues were especially revealing of the cultural shift that has... END_OF_DOCUMENT_TOKEN_TO_BE_REPLACED

Acclaimed actress Jeon Do-yeon is to be honoured at the 21st Bucheon International Fantastic Film Festival (BiFan) this year, in celebration of her 20 year career that began with Contact back in 1997. Entitled 'Contact, Jeon Do-yeon,' the special program is dedicated to the revered actress and will feature highlights from her incredible filmography, including Secret Sunshine... END_OF_DOCUMENT_TOKEN_TO_BE_REPLACED
Director Kim Jong-Kwan is well-known to fans of independent Korean cinema. A graduate of the Seoul Institute of the Arts, his short film How to Operate a Polaroid... END_OF_DOCUMENT_TOKEN_TO_BE_REPLACED
We are just one week away from the start of the 2nd Korea International Expat Film Festival (KIXFF).  Festival director Kevin Lambert took some time from his busy schedule to answer questions about the festival which... END_OF_DOCUMENT_TOKEN_TO_BE_REPLACED

Having a film selected to premiere at the Cannes Film Festival is an incredible achievement - having two is quite extraordinary. Yet that is precisely what director Hong Sang-soo has done, as The Day After (그 후) and Claire's Camera (클레어의 카메라) are due to be screened, with both films starring actress Kim Min-hee. Selected for the 'In Competition'... END_OF_DOCUMENT_TOKEN_TO_BE_REPLACED
The Villainess (악녀) has received an explosive trailer in the run-up to its debut at the Cannes Film Festival on May 21st. Appearing in the 'Out of Competition - Midnight Projections' program, writer/director Jung Byung-gil's latest... END_OF_DOCUMENT_TOKEN_TO_BE_REPLACED
Director Bong Joon-ho's Okja (옥자) is almost upon us. The highly anticipated science-fiction/drama is set to premiere In Competition at the Cannes Int. Film Festival on May 19th, before appearing on Korean cinema screens around June... END_OF_DOCUMENT_TOKEN_TO_BE_REPLACED