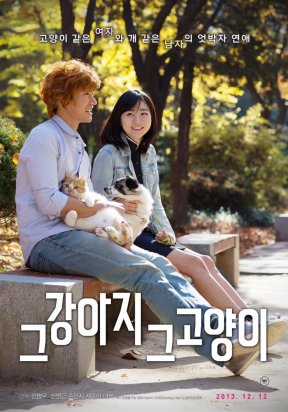 Proudly boasting to be Korea’s – and the world’s – first feature length film shot entirely with an iphone 4s, Cats and Dogs (그 강아지 그 고양이) could easily be a mere gimmick. Luckily however that’s not the case,  as the film is a quite charming, albeit raw and cliched, romantic comedy. Aimed squarely at mid-teens to early twenties audiences, director Min Byung-Woo (민병우) explores the highs and lows in the relationship of a young couple in a light-hearted manner. While in a park, webtoon artist Koh Bo-eun (Son Min-ji (손민지) is suffering from depression following a break-up. When her anti-depressants accidently fall from her pocket, a wandering dog eats them and becomes sick, resulting in a race to the veterinarian. Following the treatment however, Bo-eun is forced to adopt the animal lest it will be put down. Meanwhile, walking in a different area of the park, illustrator Kang Woo-joo (Shin Myeong-geun (신명근) finds a cat abandoned and tied to a bench, and decides to adopt it despite his intention to leave. Due to their new animal friends, Bo-eun and Woo-joo meet everyday and are surprised to learn that they have unintentionally named their pets after each other, which sparks the beginning of a relationship.

The juxtaposition between characters is very cute

Cats and Dogs is surprisingly technically sophisticated given the limitations imposed by iphone cameras. While initially the visual quality is more akin to a student film, such thoughts dissipate with time as the framing, editing, soundtrack and other such cinematic devices are competently employed in the construction of the rom-com. Of course, constraints are noticeable particularly in regards to establishing shots and camera movement, yet their absence does little to harm the narrative. Director Min, who also wrote the screenplay, wisely opts for an unambitious story to keep everything simple and this approach certainly helps in conveying the romance. Yet there are several moments when the lead protagonists are written into a corner, and the director employs the use of animated web-toons to bridge any narrative gaps. As Bo-eun and Woo-joo are web artists the sequences slot nicely into the film as well as continuing the tongue-in-cheek sensibilities that run throughout the film, in a heightened, postmodern fashion.

Fun animations are used to bridge scenes, and are quite charming

Cats and Dogs is first and foremost a romantic-comedy, and exploits all the ridiculous cliches that go hand-in-hand with the genre. This is a blessing in the sense that it is fun to witness such silliness and how the couple will fall for each other, and a curse for the very same reasons as it is extremely predictable from start to finish. It’s understandable however, given the sole use of the iphone camera. Director Min also seems to be aware of this, and aims the film at a younger – and arguably more accepting – demographic yet cheekily throws in some sexual suggestions to keep it slightly adult. As such the film grows and becomes quite charming as a result. Interestingly the narrative is just as concerned with the nature of breaking up as it is with creating a relationship, sneaking up on audiences amongst all the sugar-coated notions of romance which also forms part of the charisma.

As perhaps is to be expected, the performances are all over-the-top although the characters do become quite likable, particularly when they are compared to the animals they take care of. Shin Myeong-geun is arguably the most charismatic due to his comical and laid back nature, while Son Min-ji is colder and more distant. This is intentional however, and it’s good to see a Korean romantic story with genuine personality conflicts, as well as how they adapt to them. The supporting cast, meanwhile, are frankly awful and serve to drag the film down whenever they are on screen. Thankfully their appearances don’t last long, but the film still suffers from their presence.

Cats and Dogs is Korea’s – and the world’s – first feature length film shot entirely with iphone 4s cameras. Surprisingly the romantic-comedy isn’t as gimmicky as such a feature would have you believe, as the film is quite charming throughout despite the over-abundance of cliches. Director Min Byung-Woo wisely keeps things simple, although does attempt to explore personality clashes which is particularly refreshing when compared to other Korean rom-coms. Cats and Dogs is a cliched and limited, yet fun and silly, addition to the genre.

For Korean cinema, 2019 was a year that saw the continuation of trends that have been readily apparent for the past several years - an increasing number of big blockbuster/commercially-orientated films with high production values, and the decreasing quality of creative, engaging, and memorable stories. That is not to say the talent has disappeared of... END_OF_DOCUMENT_TOKEN_TO_BE_REPLACED
2018 was quite a bizarre year for Korean cinema. The year began much like any other. The first few months of the year were typically dedicated to family-friendly fare. News of Korean films that were... END_OF_DOCUMENT_TOKEN_TO_BE_REPLACED
While the films released throughout any particular year are indicative of a country's identity, for Korean cinema in 2017 the exploration of political and social issues were especially revealing of the cultural shift that has... END_OF_DOCUMENT_TOKEN_TO_BE_REPLACED

Acclaimed actress Jeon Do-yeon is to be honoured at the 21st Bucheon International Fantastic Film Festival (BiFan) this year, in celebration of her 20 year career that began with Contact back in 1997. Entitled 'Contact, Jeon Do-yeon,' the special program is dedicated to the revered actress and will feature highlights from her incredible filmography, including Secret Sunshine... END_OF_DOCUMENT_TOKEN_TO_BE_REPLACED
Director Kim Jong-Kwan is well-known to fans of independent Korean cinema. A graduate of the Seoul Institute of the Arts, his short film How to Operate a Polaroid... END_OF_DOCUMENT_TOKEN_TO_BE_REPLACED
We are just one week away from the start of the 2nd Korea International Expat Film Festival (KIXFF).  Festival director Kevin Lambert took some time from his busy schedule to answer questions about the festival which... END_OF_DOCUMENT_TOKEN_TO_BE_REPLACED

Having a film selected to premiere at the Cannes Film Festival is an incredible achievement - having two is quite extraordinary. Yet that is precisely what director Hong Sang-soo has done, as The Day After (그 후) and Claire's Camera (클레어의 카메라) are due to be screened, with both films starring actress Kim Min-hee. Selected for the 'In Competition'... END_OF_DOCUMENT_TOKEN_TO_BE_REPLACED
The Villainess (악녀) has received an explosive trailer in the run-up to its debut at the Cannes Film Festival on May 21st. Appearing in the 'Out of Competition - Midnight Projections' program, writer/director Jung Byung-gil's latest... END_OF_DOCUMENT_TOKEN_TO_BE_REPLACED
Director Bong Joon-ho's Okja (옥자) is almost upon us. The highly anticipated science-fiction/drama is set to premiere In Competition at the Cannes Int. Film Festival on May 19th, before appearing on Korean cinema screens around June... END_OF_DOCUMENT_TOKEN_TO_BE_REPLACED
Join 143 other subscribers