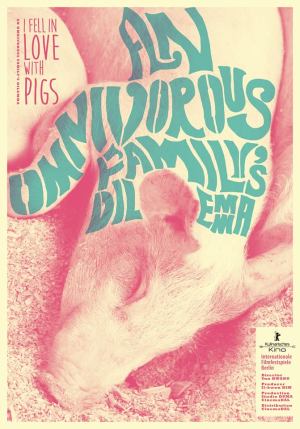 After years of making documentaries, filmmaker and animal lover Hwang Yun (황윤) hung up her camera in order to get married and start a family. Yet not long after the birth of her son, the foot-and-mouth disease epidemic spread across Korea resulting in the culling of thousands of pigs alongside other farmyard animals. Having previously had little concern for pigs, director Hwang suddenly found herself preoccupied with their plight. The questions swirling in her mind prompted the director to contact farms in order to film the arising situations and, after finally obtaining permission, she gathers her camera and embarks on documenting the life of pigs. 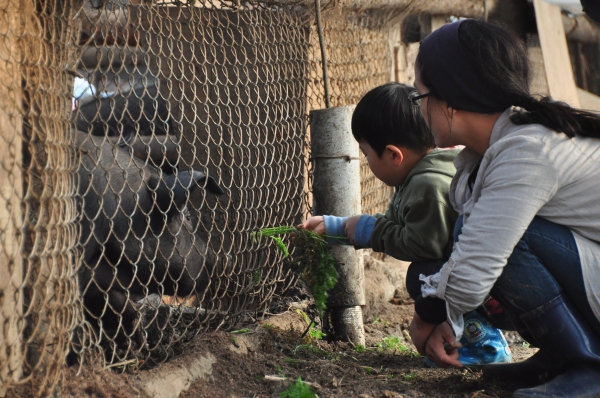 An Omnivorous Family’s Dilemma (잡식가족의 딜레마) is a charming and heartfelt family documentary, as well as a highly enjoyable and educational experience. The approach that director Hwang takes in exploring the life of pigs is key to what the film so endearing. She is not simply an animal activist but a concerned mother and Korean citizen, and in employing this perspective an ‘everyperson’ quality is informed that makes the documentary highly accessible and compelling. As such the issues director Hwang encounters appear wholly natural, as she has no definitive agenda as such but simply lets her curiosity guide her. Ironically however this also holds the documentary back from being more powerful and thought-provoking, as the inclusion of greater investigative journalism would have undoubtedly bolstered her arguments regarding pig farming. 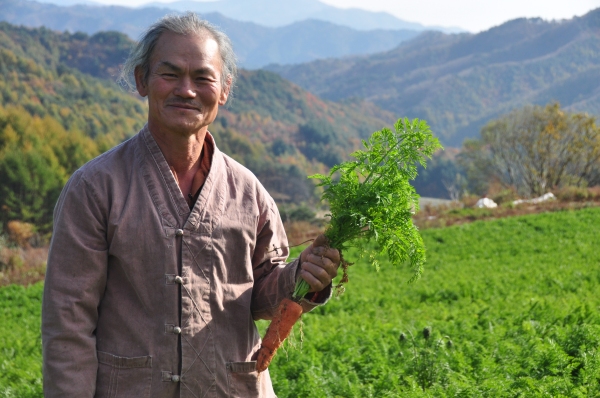 Director Hwang is initially motivated out of concern for the foot-and-mouth epidemic that swept Korea, which ultimately informs her debate between factory and free range farming. Scenes from the factory farms she visits are as abominable as they are powerful, depicting pigs confined to grotesque, tiny cages in which they eat, sleep, are artificially inseminated, rear young, and ultimately die. The imagery frequently calls forth comparisons with concentration camps, yet the most horrific scenes occur during the mass culls in which hundreds of live, squealing pigs are crushed and buried alive. Director Hwang’s vision pertinently captures a strong indictment of not of the barbarism of factory farming, but also the demand for meat in society at any cost.

Yet the factory farm scenes are generally kept to a minimum in order to explore the living conditions of free range pigs. It is during such scenes that director Hwang employs a strong focus on family, by bringing her young son to educate him whilst simultaneously forming relationships with a farrow of piglets. The benefits of free range farming, as well as her son’s development, are wonderfully captured and are ultimately why An Omnivorous Family’s Dilemma is so entertaining. Watching director Hwang and her son learn the basics of pig farming and then later struggling with pork in their diet is humourous take on the moral dilemma, and watching the conflicts that arise within the family are amusing and thought-provoking throughout.

An Omnivorous Family’s Dilemma is a charismatic and enjoyable documentary about pig farming in Korea. This is chiefly due to the perspective director Hwang Yun employs, who approaches the issues not only as an animal rights activist but also as a wife and mother. The contrasts between factory and free range farming are powerful and thought-provoking, yet it is the development of director Hwang’s son and their dietary dilemmas regarding pork that form the core entertainment. While An Omnivorous Family’s Dilemma would undoubtedly benefit from greater investigative journalism, the documentary is a gentle and heartfelt viewing experience. 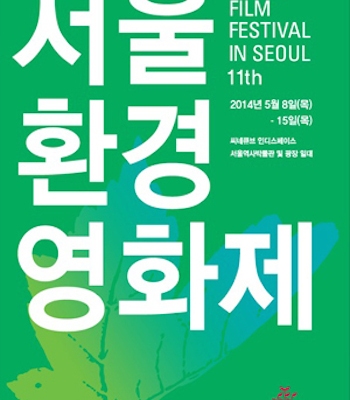 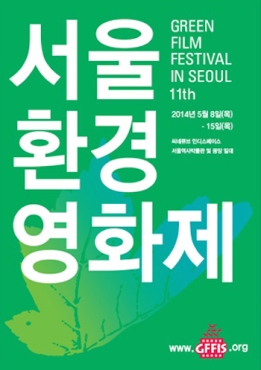 With the Green Film Festival in Korea (GFFIS) opening on May 8th, now is a good time to see what Korean films are present within the programs.

A Dream of Iron

A Dream of Iron

Documentary A Dream of Iron arrives as the most celebrated Korean film in the category following a premiere at Berlinale and being awarded the NETPAC prize (alongside Non-Fiction Diary). Unable to understand his partner’s decision to become a Buddhist monk, director Park begins searching for something tangible and awe-inspiring, leading him to Korea’s POSCO steelworks. Contrasting differing ideas of religion and majesty, A Dream of Iron contains stunning cinematography of the country’s struggle with modernity. Please click here for the review. 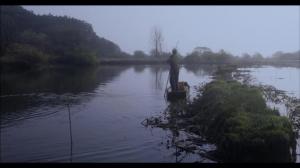 Running at 54 minutes, documentary Upo, People in Wetland explores the ramifications of turning the region into a protected conservation area. With the wetland ecosystem designated as such, the government works hard to uphold the law by disallowing people to enter the area in order to preserve it, which angers local residents. Upo, People in Wetland explores the relationship between the local people and the wetlands, and asks questions about how best to maintain the natural beauty of the conservation as well as coexisting with Upo citizens. The documentary features breathtaking cinematography of Korea’s natural landscapes.

Following a world premiere at Jeonju International Film Festival, director Moon Seung-wook’s Watchtower heads into competition at GFFIS. The 63 minute film blends documentary and fictional footage, as time-travellers from the year 2030 in Chuncheon journey to the past to recapture past memories. Of particular importance to the time-travellers is the Chuncheon watchtower, a building that survived the Korean War to become one of the oldest monuments in the city. Yet in 2013 there are plans to tear the watchtower down, plans the time-travellers desperately seek to stop.

This 30 minute entry by director Yoon follows lonely youngster Ji-woong, whose only source of happiness is his pet cat. With his father working long hours to pay for his sick mother’s medication, Ji-woong hears that cat meat is good for reviving health…and shortly thereafter discovers his pet has gone missing.

To see the full listing of all the films in the Green Competition, please click here.

To see the full listing of all the films in the Green Panorama – Eco Thriller, please click here.

The Green Film Festival in Seoul (제 11회 서울환경영화제) is gearing up for it’s 11th installment, and is due to take place from May 8th until 15th.

This year the environmentally focused festival will be held across three cinemas in the Gwanghwamun area – Cinecube, Indiespace, and the Seoul Museum of History – which are all located close to each other (please see below for the map). While previous incarnations of the event were concerned with the importance of green issues, the 11th edition intends to focus more on entertaining, rather than serious, productions that deal with the environment. 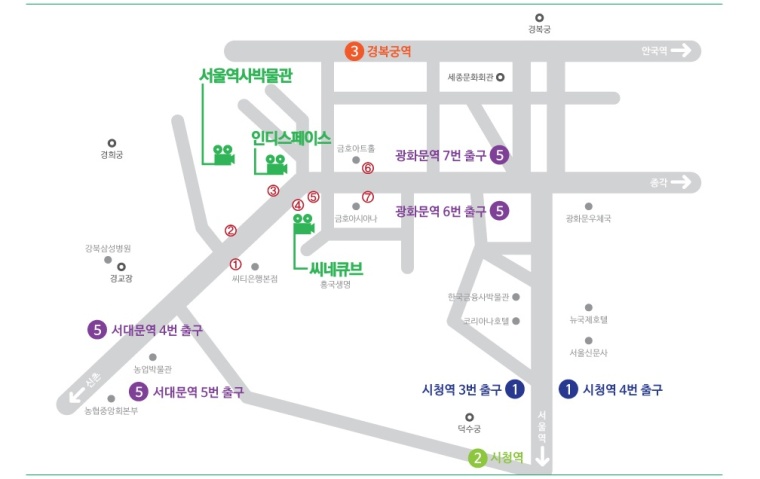 The programs in this year’s festival include traditional categories such as Green Panorama and Green Competition yet are also joined by Eco Thriller, Ancient Futures, Green Asia, Green Panorama in Korea, Children of the Earth, and Animals, Our Sweet and Wild Companion.

The trailer below gives a glimpse of the films being shown throughout the festival, and the wide variety of topics that will be explored throughout.

The Kings of Summer

The Kings of Summer

Premiering at the Sundance Film Festival in 2013 to critical praise, director Jordan Vogt Roberts’ coming of age drama has been described as akin to the classic 1986 film Stand By Me for capturing the lives and attitudes of disaffected youth so sincerely. The Kings of Summer depicts the story of three teenagers who decide to spend the season in the woods free from their interfering parents. However as they build a house for themselves and learn to live of the land, the trio are faced with trials that test their ideas of friendship and the importance of family.

Please see below for the trailer:

For Korean cinema, 2019 was a year that saw the continuation of trends that have been readily apparent for the past several years - an increasing number of big blockbuster/commercially-orientated films with high production values, and the decreasing quality of creative, engaging, and memorable stories. That is not to say the talent has disappeared of... END_OF_DOCUMENT_TOKEN_TO_BE_REPLACED
2018 was quite a bizarre year for Korean cinema. The year began much like any other. The first few months of the year were typically dedicated to family-friendly fare. News of Korean films that were... END_OF_DOCUMENT_TOKEN_TO_BE_REPLACED
While the films released throughout any particular year are indicative of a country's identity, for Korean cinema in 2017 the exploration of political and social issues were especially revealing of the cultural shift that has... END_OF_DOCUMENT_TOKEN_TO_BE_REPLACED

Acclaimed actress Jeon Do-yeon is to be honoured at the 21st Bucheon International Fantastic Film Festival (BiFan) this year, in celebration of her 20 year career that began with Contact back in 1997. Entitled 'Contact, Jeon Do-yeon,' the special program is dedicated to the revered actress and will feature highlights from her incredible filmography, including Secret Sunshine... END_OF_DOCUMENT_TOKEN_TO_BE_REPLACED
Director Kim Jong-Kwan is well-known to fans of independent Korean cinema. A graduate of the Seoul Institute of the Arts, his short film How to Operate a Polaroid... END_OF_DOCUMENT_TOKEN_TO_BE_REPLACED
We are just one week away from the start of the 2nd Korea International Expat Film Festival (KIXFF).  Festival director Kevin Lambert took some time from his busy schedule to answer questions about the festival which... END_OF_DOCUMENT_TOKEN_TO_BE_REPLACED

Having a film selected to premiere at the Cannes Film Festival is an incredible achievement - having two is quite extraordinary. Yet that is precisely what director Hong Sang-soo has done, as The Day After (그 후) and Claire's Camera (클레어의 카메라) are due to be screened, with both films starring actress Kim Min-hee. Selected for the 'In Competition'... END_OF_DOCUMENT_TOKEN_TO_BE_REPLACED
The Villainess (악녀) has received an explosive trailer in the run-up to its debut at the Cannes Film Festival on May 21st. Appearing in the 'Out of Competition - Midnight Projections' program, writer/director Jung Byung-gil's latest... END_OF_DOCUMENT_TOKEN_TO_BE_REPLACED
Director Bong Joon-ho's Okja (옥자) is almost upon us. The highly anticipated science-fiction/drama is set to premiere In Competition at the Cannes Int. Film Festival on May 19th, before appearing on Korean cinema screens around June... END_OF_DOCUMENT_TOKEN_TO_BE_REPLACED
Join 143 other subscribers
Loading Comments...