As anyone familiar with Korean cinema is aware, comedy-dramas based around family are quite prolific. With the traditional family unit undergoing changes in recent years, the problems and dynamic appearing on screen has followed suit to reflect the evolving societal issues. Boomerang Family (고령화가족) is director Song Hae-seong’s (송해성) foray into the arena, and with previous films including Failan (파이란) and Maundy Thursday (우리들의 행복한 시간), the potential is certainly there for a penetrating examination of the contemporary family unit. Indeed, the trailer suggests a fun-filled look at at such dysfunctional characters. Except that it isn’t. Hitting someone over the head with a brick isn’t funny. Rape and sexual assault aren’t funny. Alongside spectacularly unlikable characters, cliched melodrama and the frankly bizarre last-minute inclusion of gangsters, the contrived and misogynistic screenplay is awful. While there are occasional moments of comedy and drama, and the idea of the close-knit family is debunked, there’s little else positive to say about Boomerang Family.

40 year old film director In-mo (인모, Park Hae-il (박해일) is broke following the failure of his movie and separation from his wife, and decides to move back home with his mother (엄마, Yoon Yeo-jeong (윤여정). However older brother Han-mo (한모, Yoon Je-moon (윤제문), a 44 year old ex-convict who still lives at home, is not happy about the move as he doesn’t wish to share. While trying to accept the new situation, they are joined by 35 year old sister Mi-yeon (미연, Kong Hyo-jin (공효진) and her daughter Min-kyeong (민경, Jin Ji-hee (진지희). As the family continually bicker and fight placing stress on their poor mother, Min-kyeong decides to run away from home which forces them all to unite.

The opening of Boomerang Family adequately sets up the kind of comedy to be expected during the film. In-mo fights a man who slept with his wife, and as he begins to lose, In-mo clubs the man on the back of the head with a rock before kicking him while he’s down. Yet as the soundtrack is a light-hearted, French style ditty, these violent images are intended to be humourous. Bizarrely this becomes a running ‘gag’ throughout the film, as when difficult situations arise the respective character simply uses a brick to the head to resolve it. One such incident involves Han-mo who spies a woman in the process of being sexually assaulted and/or raped, and he becomes very excited at the prospect of watching it continue. It’s only when he realises the woman in question is his sister than Han-mo acts by beating the man to a pulp, yet Mi-yeon ends the confrontation by clubbing her own brother with a brick. The reason? The man is her boyfriend. Yet this is not the only incident of misogyny. Despite being the central protagonists In-mo also tries to sexually assault a hairdresser, in order to upset his brother. Luckily she fights him off, but then In-mo staggering admonishes her by stating that people their age can’t love, that only physical needs remain. Rape and perversion are apparently sources of comedy – and are forgivable – in the world of Boomerang Family.

Such incidents highlight the serious problem with the film, as none of the family members are actually likable save the mother and youngster Min-kyeong, both of whom are largely ignored within the family and by the script. When Mi-yeon returns home claiming she wants to divorce her husband, she is scolded by her brothers even after they have seen she is a victim of domestic violence. To resolve the problem In-mo and Han-mo drink with the husband and beg him to take her back, yet when he insults the family the brothers – surprise! – club him with a brick. When In-mo meets with his cheating spouse to discuss divorce she also offends the family, and he responds by nearly striking her in public. Meanwhile Han-mo masturbates by using his niece’s panties as stimulation. It is very difficult to align with any of the characters save the female protagonists, yet Mi-yeon and Min-kyeong are so stuck up and rude it’s not easy with them either. Ultimately what’s left to enjoy is the family interaction and squabbling.

The mother must suffer the awful behaviour exhibited by her children

The in-fighting displayed by the family is certainly the most enjoyable aspect of Boomerang Family as they curse and hit each other in the manner expected of pre-school children. The immaturity is somewhat humourous, although the comedy is very hit-and-miss and there’s only so many times that kicks to the stomach and fart gags can be funny. For his part director Song Hae-seong competently helms the film although he is never really displays any flair or challenging material as he has done with his previous works. A similar criticism applies to all the acting talent involved, as they all give solid performances without doing much more. This is mostly due to the script which has precious little characterisation for them to work with, and as such audiences are forced to rely on knowledge of the actors star persona and receive enjoyment from them doing silly things.

The script is also responsible for writing the characters into a corner, and then struggling to get them out of it. The result is a family meeting whereby all the secrets they’ve been withholding are revealed, and clearly the attempt is for comedy as each secret becomes more shocking then the last. Yet these revelations are actually more dramatic and sad than funny, and despite the big shocks there isn’t any real exploration or impact. However, the screenwriters use this event as the catalyst for Min-kyeong to run away from home, and thus begins the contrite twist which so often plagues the Korean film industry. Gangsters suddenly emerge to threaten the family, shady business deals with huge amounts of money are made, criminals that abduct and rape teenagers appear, flashbacks to unseen melodrama feature, and so forth. One incident of extreme violence forces Park Hae-il to provide a glimpse of a performance he is capable of, but it’s fleeting.  However, the real question is, can everyone make it to Mi-yeon’s wedding – to the guy that previously tried to assault her – and have a happy ending? It’s very hard to overlook such flaws in order to accept such a finale. 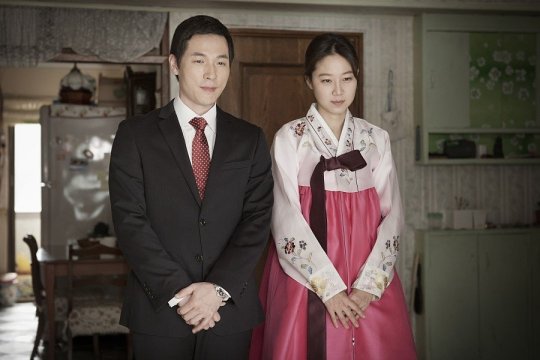 Can the prospect of a new marriage bring peace to the family?

Boomerang Family (고령화가족) is a comedy-drama about bickering, immature siblings that crucially is neither funny nor dramatic. The violence of hitting someone with a brick to the head is not comedic, nor is the rampant misogyny featured throughout where rape and sexual assault are not only intended to be entertaining, but also forgivable. Director Song Hae-seong (송해성) competently helms the film, while solid performances are provided by the actors involved, yet as their characters are so utterly unlikable it’s difficult to align with them let alone find enjoyment.

For Korean cinema, 2019 was a year that saw the continuation of trends that have been readily apparent for the past several years - an increasing number of big blockbuster/commercially-orientated films with high production values, and the decreasing quality of creative, engaging, and memorable stories. That is not to say the talent has disappeared of... END_OF_DOCUMENT_TOKEN_TO_BE_REPLACED
2018 was quite a bizarre year for Korean cinema. The year began much like any other. The first few months of the year were typically dedicated to family-friendly fare. News of Korean films that were... END_OF_DOCUMENT_TOKEN_TO_BE_REPLACED
While the films released throughout any particular year are indicative of a country's identity, for Korean cinema in 2017 the exploration of political and social issues were especially revealing of the cultural shift that has... END_OF_DOCUMENT_TOKEN_TO_BE_REPLACED

Acclaimed actress Jeon Do-yeon is to be honoured at the 21st Bucheon International Fantastic Film Festival (BiFan) this year, in celebration of her 20 year career that began with Contact back in 1997. Entitled 'Contact, Jeon Do-yeon,' the special program is dedicated to the revered actress and will feature highlights from her incredible filmography, including Secret Sunshine... END_OF_DOCUMENT_TOKEN_TO_BE_REPLACED
Director Kim Jong-Kwan is well-known to fans of independent Korean cinema. A graduate of the Seoul Institute of the Arts, his short film How to Operate a Polaroid... END_OF_DOCUMENT_TOKEN_TO_BE_REPLACED
We are just one week away from the start of the 2nd Korea International Expat Film Festival (KIXFF).  Festival director Kevin Lambert took some time from his busy schedule to answer questions about the festival which... END_OF_DOCUMENT_TOKEN_TO_BE_REPLACED

Having a film selected to premiere at the Cannes Film Festival is an incredible achievement - having two is quite extraordinary. Yet that is precisely what director Hong Sang-soo has done, as The Day After (그 후) and Claire's Camera (클레어의 카메라) are due to be screened, with both films starring actress Kim Min-hee. Selected for the 'In Competition'... END_OF_DOCUMENT_TOKEN_TO_BE_REPLACED
The Villainess (악녀) has received an explosive trailer in the run-up to its debut at the Cannes Film Festival on May 21st. Appearing in the 'Out of Competition - Midnight Projections' program, writer/director Jung Byung-gil's latest... END_OF_DOCUMENT_TOKEN_TO_BE_REPLACED
Director Bong Joon-ho's Okja (옥자) is almost upon us. The highly anticipated science-fiction/drama is set to premiere In Competition at the Cannes Int. Film Festival on May 19th, before appearing on Korean cinema screens around June... END_OF_DOCUMENT_TOKEN_TO_BE_REPLACED
Join 143 other subscribers